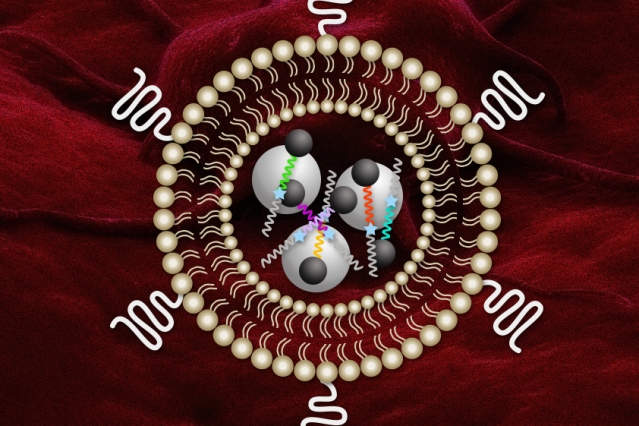 MIT researchers have designed nanosensors that can profile tumors and may yield insight into how they will respond to certain therapies. (Credit: Christine Daniloff/MIT)

MIT researchers have designed nanosensors that can profile tumors and may yield insight into how they will respond to certain therapies. The system is based on levels of enzymes called proteases, which cancer cells use to remodel their surroundings.

Once adapted for humans, this type of sensor could be used to determine how aggressive a tumor is and help doctors choose the best treatment, says Sangeeta Bhatia, the John and Dorothy Wilson Professor of Health Sciences and Technology and Electrical Engineering and Computer Science and a member of MIT’s Koch Institute for Integrative Cancer Research.

“This approach is exciting because people are developing therapies that are protease-activated,” Bhatia says. “Ideally you’d like to be able to stratify patients based on their protease activity and identify which ones would be good candidates for these therapies.”

Once injected into the tumor site, the nanosensors are activated by a magnetic field that is harmless to healthy tissue. After interacting with and being modified by the target tumor proteins, the sensors are secreted in the urine, where they can be easily detected in less than an hour.

Bhatia and Polina Anikeeva, the Class of 1942 Associate Professor of Materials Science and Engineering, are the senior authors of the paper, which appears in the journal Nano Letters. The paper’s lead authors are Koch Institute postdoc Simone Schurle and graduate student Jaideep Dudani.

Tumors, especially aggressive ones, often have elevated protease levels. These enzymes help tumors spread by cleaving proteins that compose the extracellular matrix, which normally surrounds cells and holds them in place.

In 2014, Bhatia and colleagues reported using nanoparticles that interact with a type of protease known as matrix metalloproteinases (MMPs) to diagnose cancer. In that study, the researchers delivered nanoparticles carrying peptides, or short protein fragments, designed to be cleaved by the MMPs. If MMPs were present, hundreds of cleaved peptides would be excreted in the urine, where they could be detected with a simple paper test similar to a pregnancy test.

In the new study, the researchers wanted to adapt the sensors so that they could report on the traits of tumors in a known location. To do that, they needed to ensure that the sensors were only producing a signal from the target organ, unaffected by background signals that might be produced in the bloodstream. They first designed sensors that could be activated with light once they reached their target. That required the use of ultraviolet light, however, which doesn’t penetrate very far into tissue.

“We started thinking about what kinds of energy we might use that could penetrate further into the body,” says Bhatia, who is also a member of MIT’s Institute for Medical Engineering and Science.

To achieve that, Bhatia teamed up with Anikeeva, who specializes in using magnetic fields to remotely activate materials. The researchers decided to encapsulate Bhatia’s protease-sensing nanoparticles along with magnetic particles that heat up when exposed to an alternating magnetic field. The field is produced by a small magnetic coil that changes polarity some half million times per second.

The heat-sensitive material that encapsulates the particles disintegrates as the magnetic particles heat up, allowing the protease sensors to be released. However, the particles do not produce enough heat to damage nearby tissue.

“It has been challenging to examine tumor-specific protease activities from patients’ biofluids because these proteases are also present in blood and other organs,” says Ji Ho (Joe) Park, an associate professor of bio and brain engineering at the Korea Advanced Institute of Science and Technology.

“The strength of this work is the magnetothermally responsive protease nanosensors with spatiotemporal controllability,” says Park, who was not involved in the research. “With these nanosensors, the MIT researchers could assay protease activities involved more in tumor progression by reducing off-target activation significantly.”

In a study of mice, the researchers showed that they could use these particles to correctly profile different types of colon tumors based on how much protease they produce.

Cancer treatments based on proteases, now in clinical trials, consist of antibodies that target a tumor protein but have “veils” that prevent them from being activated before reaching the tumor. The veils are cleaved by proteases, so this therapy would be most effective for patients with high protease levels.

The MIT team is also exploring using this type of sensor to image cancerous lesions that spread to the liver from other organs. Surgically removing such lesions works best if there are fewer than four, so measuring them could help doctors choose the best treatment.

Bhatia says this type of sensor could be adapted to other tumors as well, because the magnetic field can penetrate deep into the body. This approach could also be expanded to make diagnoses based on detecting other kinds of enzymes, including those that cut sugar chains or lipids.