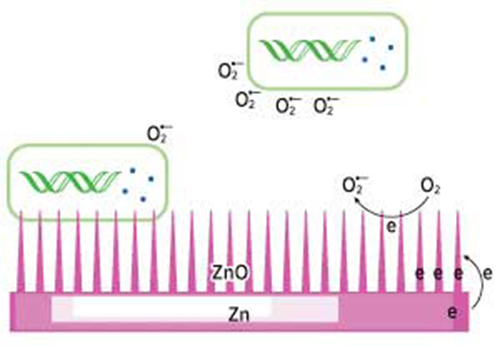 Coatings developed at A*STAR could soon replace biochemically active antibacterial agents, whose overuse in healthcare and fields such as agriculture and wastewater treatment is the main contributor to the growing global problem of antimicrobial resistance (Small, “ZnO nanopillar coated surfaces with substrate-dependent superbactericidal property”).

Most antimicrobial strategies rely on applying small, polymer-based organic disinfectants or coatings that kill microbes on frequently touched surfaces, which are the principal vehicle of transmission. However, these substances can induce secondary effects and drug resistance.

Instead of using external chemicals, Yugen Zhang and colleagues from the A*STAR Institute of Bioengineering and Nanotechnology have come up with nanostructured coatings that annihilate microbes by piercing their cell walls.

“We were inspired by the wings of dragonflies and cicadas which prevent bacteria from adhering to their surfaces because they are covered with minuscule spikes,” says Zhang.

In a simple and scalable bottom-up approach, the team formed an initial layer of ZnO particles on various substrates, such as glass, ceramics, zinc foil, and galvanized steel, and grew the nanopillars on these “seeds” from an aqueous solution of zinc salts.

To their surprise, the coatings demonstrated excellent antimicrobial activity against the gram-negative bacteria Escherichia coli and gram-positive Staphylococcus aureus as well as the fungus Candida albicans, especially when deposited on zinc foil and galvanized steel.

Fluorescence and electron microscopy revealed that, in addition to physically rupturing the cell walls of surface-attached microbes, nanopillars formed on these zinc-based substrates had another benefit.

This enhanced the potency of the nanopillars compared to those deposited on other substrates.

In addition to their stability and lack of toxicity, these ZnO coatings have long-lasting antimicrobial properties, which is useful for real-life applications.

As a proof-of-concept experiment, Zhang’s team assessed the performance of the coatings for water disinfection by growing E. coli in water in the presence of zinc-supported nanopillars.

The bacterial levels decreased by five orders of magnitude in one hour to fall to zero after three hours.

“This technology can benefit a very broad range of applications which, I feel, will be useful in our daily lives,” says Zhang.

Specifically, these coatings can be used as filters for air circulation systems. The team is working with multiple companies to develop prototypes.

The A*STAR-affiliated researchers contributing to this research are from the Institute of Bioengineering and Nanotechnology.