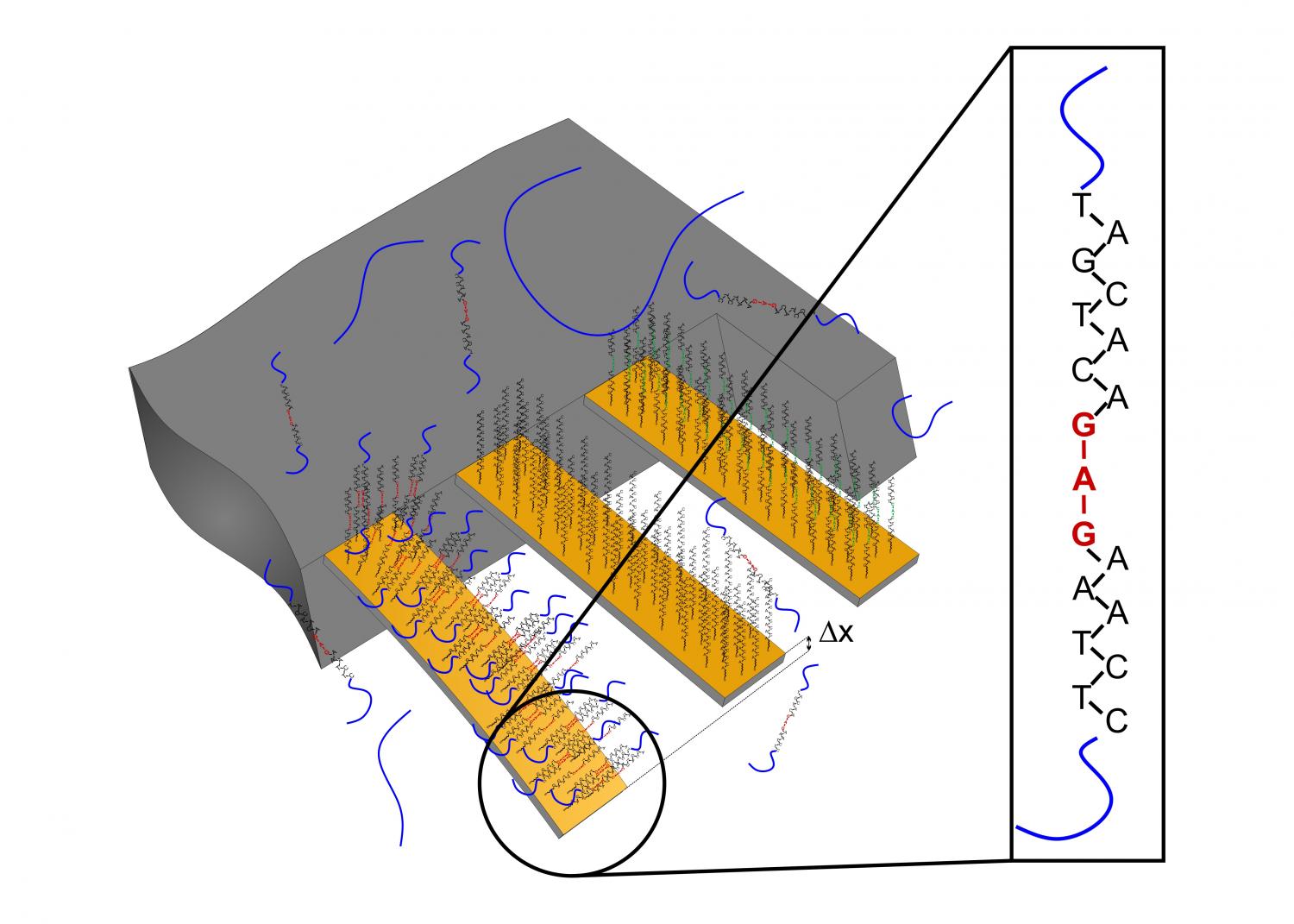 The cantilever on the left bears the recognition sequence for the target mutation. If this is present in the sample being tested, the corresponding segment of RNA binds to the cantilever, causing the latter to bend. This can be measured, providing clear evidence that the genetic change is present. (Credit: University of Basel, Department of Physics)

Changes in the genetic make-up of tissue samples can be detected quickly and easily using a new method based on nanotechnology. This report researchers from the Swiss Nanoscience Institute, the University of Basel and the University Hospital Basel in first clinical tests with genetic mutations in patients with malignant melanoma. The journal Nano Letters has published the study.

According to estimates by the American Skin Cancer Foundation, today more people develop skin cancer than breast, prostate, lung and colon cancer together. Although malignant melanoma accounts for only about 5 percent of skin cancers, these are the most serious cases and can result in death. Around half of all patients who develop malignant melanoma exhibit a particular genetic change (mutation). This involves a change in the BRAF gene (B gene for Rapid Acceleration of Fibrosarcoma) that leads to uncontrolled cell proliferation.
There are now drugs that exploit these specific mutations and fight the cancer, significantly extending patients’ life expectancy. However, they work only if the corresponding genetic mutation is actually present. Where it is not, they give rise to severe side effects without producing the desired effect. “It is therefore essential that we are able to identify the mutations reliably in tissue samples. That is the only way of ensuring that patients get the right treatment and successful outcomes,” explains the paper’s co-author, Professor Katharina Glatz of the Institute of Pathology at University Hospital Basel.

Coated microcantilevers
In a clinical pilot study, the team led by Professor Ernst Meyer and Professor Christoph Gerber at the Swiss Nanoscience Institute and the Department of Physics at Basel University used nanosensors for the first time to detect the mutations in tissue samples from patients with malignant melanoma. To do so, the researchers employed tiny cantilevers that were coated in different ways. Some of them carried a recognition sequence for the mutation the researchers were targeting.
Then genetic material (RNA) from the patients’ tissue samples was isolated and applied to the cantilevers. If the genetic change is present, the patient’s RNA binds to the recognition sequence on the cantilever. The resulting surface stress leads to bending of the cantilever, which can be measured. If the mutation is absent from the RNA sample, this bending does not occur – in other words, only a specific binding produces a signal. The advantage of using nanocantilevers is that no time-consuming procedures are needed. It takes less than a day to move from performing the biopsy to diagnosis.

Unthinkable 30 years ago
In this study, the Basel research team was able to demonstrate that nanomechanical microcantilevers can identify mutations in complex mixtures of total RNA isolated from tissue samples. At first, cantilevers were used only in atomic force microscopes. Professor Christoph Gerber – who is due to receive the Kavli Prize in Oslo on 6 September, together with Gerd Binnig and Cal Quate, for developing the atomic force microscope – observes: “Thirty years ago, we weren’t able to foresee that our technology might one day be used in hospital for personalized medicine – ‘from the bench to the bedside,’ as it were.”