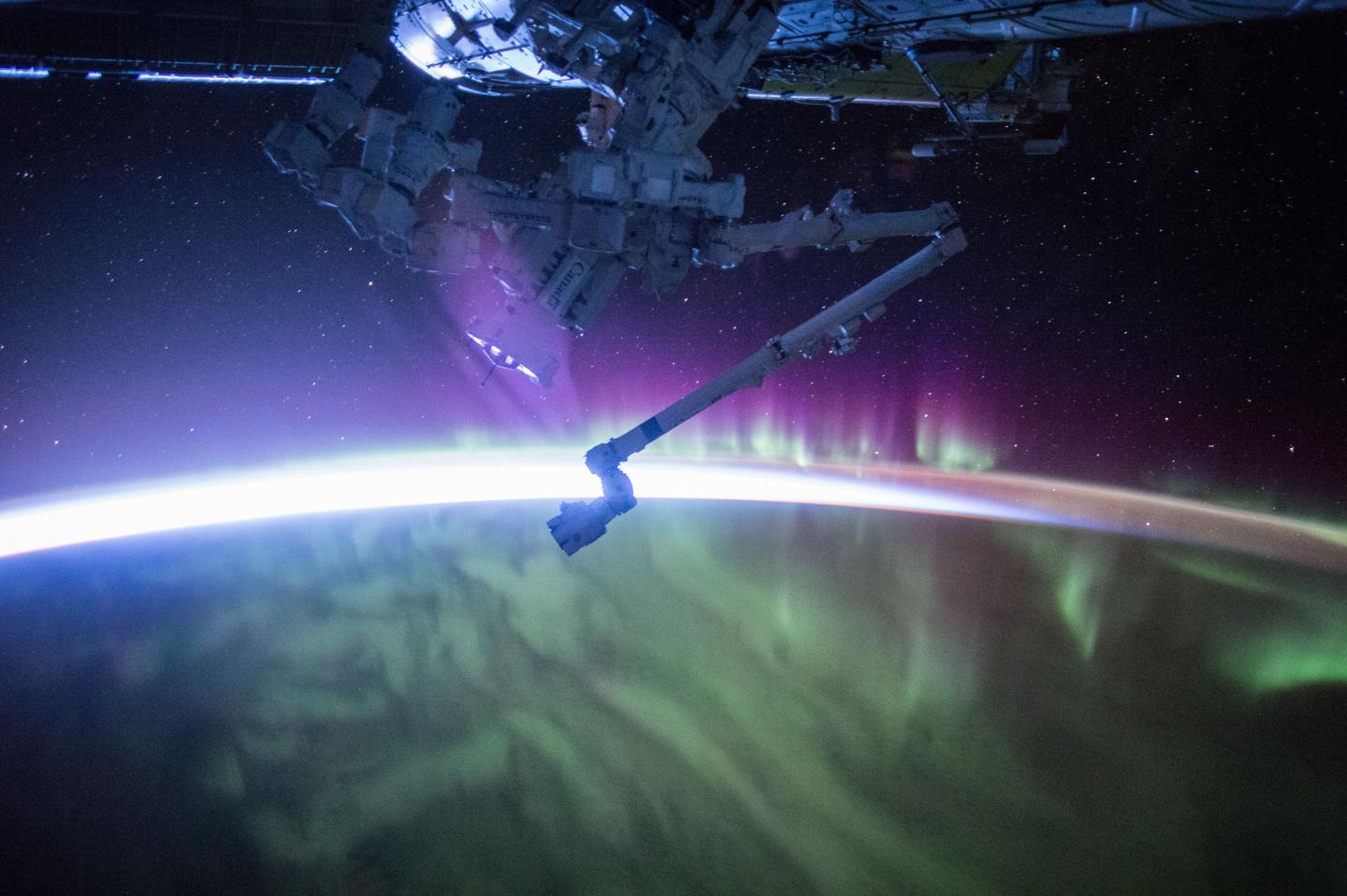 Earth observation of the space environment taken during a night pass by Dr. Kjell Lindgren of the Expedition 44 crew during Scott Kelly’s One-Year Mission aboard the International Space Station (ISS). An aurora with purple and SSRMS arm are visible. Credit: NASA

In each life a little rain must fall, but in space, one of the biggest risks to astronauts’ health is radiation “rain”. NASA’s Human Research Program (HRP) is simulating space radiation on Earth following upgrades to the NASA Space Radiation Laboratory (NSRL) at the U.S. Department of Energy’s Brookhaven National Laboratory. These upgrades help researchers on Earth learn more about the effects of ionizing space radiation to help keep astronauts safe on a journey to Mars.

Radiation is one of the most dangerous risks to humans in space, and one of the most challenging to simulate here on Earth. The risk to human health significantly increases when astronauts travel beyond Lower Earth Orbit (LEO) outside the magnetosphere. The magnetosphere shields Earth from solar particle events (SPEs) and radiation caused by the sun and galactic cosmic rays (GCR) produced by supernova fragments. Radiation particles like ions can be dangerous to humans because they can pass through skin, depositing energy and damaging cells or DNA along the way. This damage can increase the risk for diseases later in life or cause radiation sickness during the mission.

Radiation may cause damage to the central nervous system, cardiovascular system, and circulatory system of astronauts. There is evidence that humans exposed to large doses of radiation from radiotherapy experience cognitive and behavioral changes, and recent studies suggest these risks may occur at lower doses for GCR creating a possible risk for operating a space vehicle. Space environment variables (Ex. microgravity, CO2, lack of sleep, etc.) which produce stress could interact with radiation in a synergistic fashion exacerbating the impacts.

With the recent upgrades to the NSRL, NASA is improving its ability to understand the effects of radiation on the body. The most notable upgrades were made to the GCR simulator, which was recently highlighted in ScienceDirect.

“There is ample research on acute effects of radiation exposure but very little on latent effects, and the latter more closely resembles the health effects expected from long duration space flight,” Lisa Carnell, Ph.D., Medical Countermeasure Lead for NASA Space Radiation said. “Imagine ion trajectories to be similar to rain; sometimes there is a downpour (solar particle event) and sometimes there a light drizzle or heavy, sparse droplets (similar to galactic cosmic radiation). With the upgrades we can simulate different types of ion rain with multiple types of ions sequentially versus only one type of ion at a time.”

The GCR upgrades enable researchers to rapidly switch ion types and energy intensities. To support these improvements, software controls were added to permit smooth movement from target to target. The cooling system in one of the Electron Beam Ion Source, or EBIS magnets was upgraded to handle higher energy currents. In addition, new probes were installed in two of the beamline’s magnets to speed up setting changes.

Before these upgrades, switching radiation beams was not an easy or efficient process in the NSRL. The lab was originally designed to harness ions from Brookhaven’s Booster accelerator, which produces all species of ions within a range of energies. Now switching ion species and energies can be done in minutes. More realistic studies and radiation countermeasure tests are conducted because investigators can better simulate the space environment.

The improvements in beam energy enable coverage of a greater part of the GCR spectrum. The larger beam makes it possible to radiate numerous samples at once and increase throughput and efficiency. Precision control also increases the accuracy for dose delivery. Uniformity of the radiation field intensity also reduces uncertainties in dose deliveries.

This results in a more accurate testing environment for NASA researchers who are developing various types of shielding materials to protect astronauts from radiation. HRP investigators can use the technology to test tissue samples leading to health countermeasures to protect against molecular damage. Cancer researchers also can explore various heavy ion therapies to eradicate tumors. The NSRL is one of the few labs in the United States capable of contributing to heavy ion radiotherapy research. Users from NASA, national laboratories, and more than 50 institutions and universities in the U.S., Europe, and Japan test medical, biological, and physical samples using the NSRL ion beam line.

As NASA prepares for sending humans farther and longer than ever before, space radiation research continues to advance our understanding of the risks to the human body. It takes innovative research on the Earth to support innovative research in space. And if the rainy day does come, NASA will be prepared.