When NASA’s James Webb Space Telescope launches in 2021, it will write a new chapter in cosmic history. This premier space science observatory will seek the first stars and galaxies, explore distant planets around other stars, and solve mysteries of own solar system. Webb will be controlled from the Mission Operations Center (MOC) at the Space Telescope Science Institute in Baltimore, Md.

To prepare for launch, the flight operations team recently conducted two successful communications tests. The first simulated the complex communications among numerous entities in the critical period of launch through the first six hours of flight. The second demonstrated that the MOC could successfully communicate with the telescope.

From the moment Webb launches, and through the first six hours of flight, five different telecommunications service providers located around the world will alternately convey command and telemetry data to the mission operations team in the MOC. The first exercise demonstrated the complex exchange among these facilities.

These different providers are needed because of the geometry of Earth in relation to Webb’s orbit and altitude.  “Whereas most low-Earth missions can use TDRS (Tracking and Data Relay Satellite) or some other kind of communications satellite in orbit around Earth to relay data, we are so far away that we have to use other facilities,” explains NASA’s Carl Starr, the Mission Operations Manager, or “MOM,” for Webb at NASA’s Goddard Space Flight Center, Greenbelt, Md.

By six hours after liftoff, Webb will be about halfway to the Moon and six times higher in altitude than the geosynchronous Earth orbit (GEO) where TDRS and many communications satellites dwell.  When the telescope reaches its destination, it will be nearly a million miles from Earth — about 45 times farther away than GEO.

“It’s a lot of going back and forth,” says Starr. “You have to change configurations, you need a stable connection with Webb at each change, you have to establish the network connections, you have to process the data — and you have to do it multiple times with different stations and make it seamless.”

“And to make things even more complicated,” Starr continues, “everyone we are talking about is in different places. You have the Space Network out in New Mexico, the Deep Space Network in California, and the European Space Agency’s Malindi station in Kenya and European Space Operations Centre in Germany.  It becomes a very complicated test to do, because no one is in the same time zone — and all of that data comes in and out of this building.” 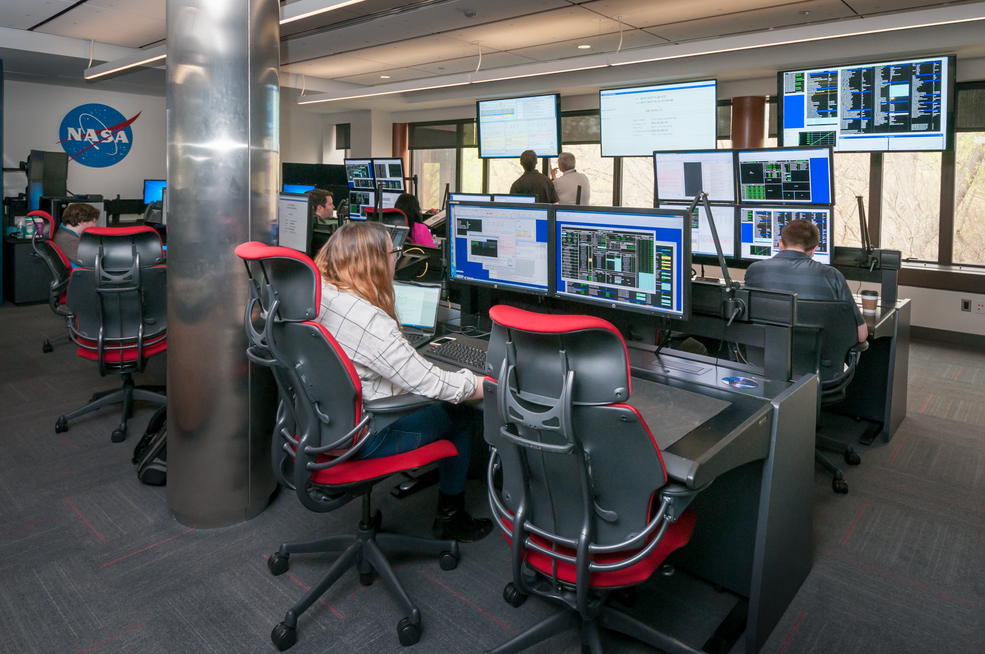 This test was a major step in demonstrating the flight operations capabilities and processes to support launch-day communications. After the first day, the team moves to a normal setup with just the three Deep Space Network terminals around the world.

“The teams were able to talk with the external entities, and prove the concept that we can manipulate the communications on the day of launch here in the building for the mission,” Starr says. “We’ll have other proficiency exercises later, but this was the first time that we did it, and it was very successful.”

No mission would be possible without communicating with the telescope. The flight operations team in Baltimore recently did that for the first time, talking to the actual Webb spacecraft on the ground while it’s being integrated and tested across the country at the Northrop Grumman facility in Los Angeles.

“We treated Webb as if it were a million miles away,” says Starr. To do this, the flight operations team connected the spacecraft to the Deep Space Network. However, since Webb isn’t really in space yet, special equipment was used to emulate the real radio link that will exist between Webb and the Deep Space Network when Webb flies.

“We can command and control the vehicle now, and run tests with it from here, without having to travel to Northrop Grumman,” Starr explains. “It really is making use of technology to stay on schedule.”

It didn’t really matter where Webb was during the test. “As far as we’re concerned, it could be in the basement of this building, and we wouldn’t know any different,” Starr added. “You’re just at your console, you’ve got a data line, your screen … it’s all very much remote. I could imagine it must be how drone pilots feel. They’re not anywhere near where their vehicle is.”

During the exercise, the team executed non-operational commands and initiated a recorder playback.  This important test demonstrated the flight operations team’s ability to command Webb from the MOC in Baltimore.

Throughout most of commissioning, the MOC will be in constant communication with Webb. After commissioning, approximately 180 days after launch, the team will communicate for 8 hours a day with the telescope. During that time, operators will send up packages of commands for the telescope to run autonomously and downlink the science data.

More tests will follow, but these were the first to show the MOC’s successful communication with Webb and with the many command and telemetry service providers. The fact that these exercises were carried out flawlessly is a testament to the hard work of the flight operations team, as well as teams across the country and around the world.

The James Webb Space Telescope will be the world’s premier space science observatory when it launches in 2021. A barrier-breaking mission for engineers and astronomers, Webb will solve mysteries of our solar system, look beyond to distant worlds around other stars, and probe the mysterious structures and origins of our universe and our place in it.