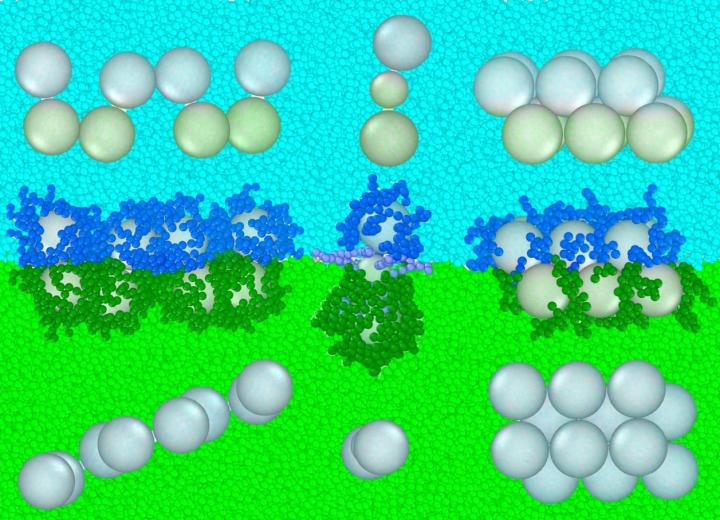 Researchers have created a new "oil and vinegar" approach to forming nanoparticle structures. In this conceptual model, green and blue elements repel one another. Not only does this create a boundary layer where particles tend to congregate, researchers can attach molecules to individual nanoparticles to make them more or less repulsed by an individual layer. This approach is depicted across the center of the image, while the resulting structures can be seen from different angles above and below. Credit: Gaurav Arya, Duke University

A new “oil-and-vinegar” approach to self-assembling materials with unusual architectures comprised of spherical nanoparticles could be useful for a number of applications including optics, plasmonics, electronics and multi-stage chemical catalysis.

A research team from Duke University has developed a new technique that takes advantage of the layers formed by liquids that refuse to mix together, similar to the structure of a bottle of vinaigrette salad dressing that is left on the shelf too long.

Suspended spherical nanoparticles designed to clump together in other systems will likely try to maximize their points of contact if left to their own tendencies by packing themselves as tightly as possible, resulting in the formation of either random clusters or a 3D, crystalline structure.

Researchers have long sought the ability to build more open structures of lower dimensions to take advantage of certain phenomena that could occur in the spaces between different types of particles, looking for new techniques to precisely control the sizes and placements of the space and particles.

In the new Duke system, spherical nanoparticles will form a single layer at the interface of the opposing liquids, but will not have to maintain residence there, as the addition of “oil” or “vinegar” molecules to the particles surfaces will make them float more on one side of the dividing line than the other.

“The particles want to maximize their number of contacts and form bulk-like structures, but at the same time, the interface of the different liquids is trying to force them into two layers,” Gaurav Arya, associate professor of mechanical engineering and materials science at Duke, said in a statement. “So you have a competition of forces, and you can use that to form different kinds of unique and interesting structures.”

The researchers believe they can precisely control the amount that each spherical nanoparticle is repelled by one liquid or the other and by altering this property along with other properties, such as the nanoparticles composition and size, they could make different types of unique shapes, including spindly molecule-like structures and zig-zag structures where only two nanoparticles touch at a time.

In the proof-of-concept study, the researchers found that several different types of nanoparticles could be used, including gold for plasmonic and electrical devices and other metallic elements that could catalyze various chemical reactions.

The opposing substrates that form the interface are modeled after various types of polymers that could also be used in such applications.

“So far in this paper, we have only introduced the assembly approach and demonstrated its potential to create these exotic arrangements that you wouldn't normally get,” Arya said. “There are so many more things to do next. For one, we'd like to explore the full repertoire of possible structures and phases researchers could make using this concept. We are also working closely with experimentalists to test the full capabilities of this approach.”