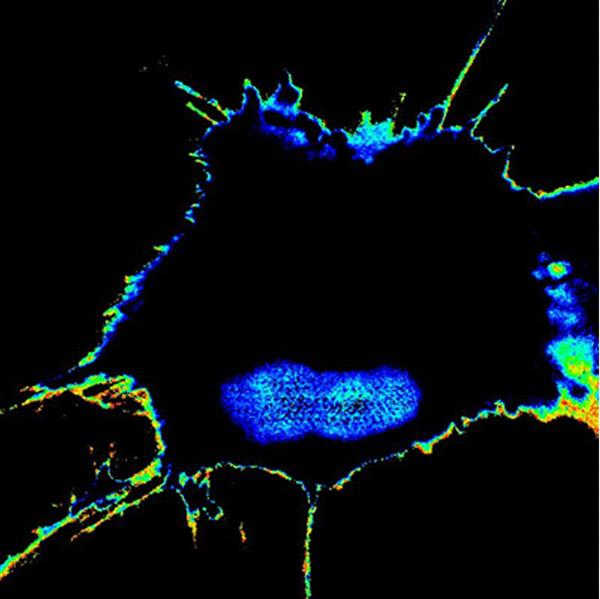 A tumor cell that has acquired high metastatic potential during chemotherapy lights up with high FRET biosensor readout, whereas the cells that are sensitive to chemotherapy (and hence, low potential) stays dark. Credit: UC San Diego Health

New technology could pinpoint which cancer cells will metastasize before they do.

Researchers from the University of California San Diego have developed the Fluorescence Resonance Energy Transfer (FRET) biosensor that can detect and measure the metastatic potential of individual cancer cells, enabling doctors to take steps to stop cancer from metastasizing and causing future damage.

“Cancer would not be so devastating if it did not metastasize,” Pradipta Ghosh, MD, professor in the UC San Diego School of Medicine departments of Medicine and Cellular and Molecular Medicine, director of the Center for Network Medicine and senior study author, said in a statement. “Although there are many ways to detect metastasis once it has occurred, there has been nothing available to ‘see’ or ‘measure’ the potential of a tumor cell to metastasize in the future.

“So at the Center for Network Medicine, we tackled this challenge by engineering biosensors designed to monitor not one, not two, but multiple signaling programs that drive tumor metastasis; upon sensing those signals a fluorescent signal would be turned on only when tumor cells acquired high potential to metastasize, and therefore turn deadly,” he added.

Cancer cells alter normal cell communications by hijacking one of several signaling pathways to permit metastasis to occur. However, it becomes difficult for researchers to predict which pathway will be used as tumor cells adapt to the environment or cancer treatment.

In the study, the researchers compared proteins and protein modifications in normal tissues against cancer tissues and identified a particular protein and its unique modification called tyrosine-phosphorylated CCDC88A (GIV/Girdin) that are only present in tumor cells.

Further analysis showed that this modification could represent a point of convergence of multiple signaling pathways commonly hijacked by tumor cells during metastasis.

The researchers engineered the biosensors with sophisticated microscopes to monitor the modification on GIV and discovered fluorescent signals reflected the tumor cell’s metastatic tendency, enabling them to measure the metastatic potential of single cancer cells.

Only a select few cancer cells metastasize and according to the researchers, that potential tends to wane at times. However, making it possible to predict which cells will metastasize could enable personalized treatment plans for individual patients.

“It’s like looking at a Magic 8 Ball, but with a proper yardstick to measure the immeasurable and predict outcomes,” Ghosh said. “We have the potential not only to obtain information on single cell level, but also to see the plasticity of the process occurring in a single cell.

“This kind of imaging can be used when we are delivering treatment to see how individual cells are responding,” he added.

The researchers plan to further refine the sensors so that it can be used as a tool to advance cancer cell biology.

The study was published in iScience.