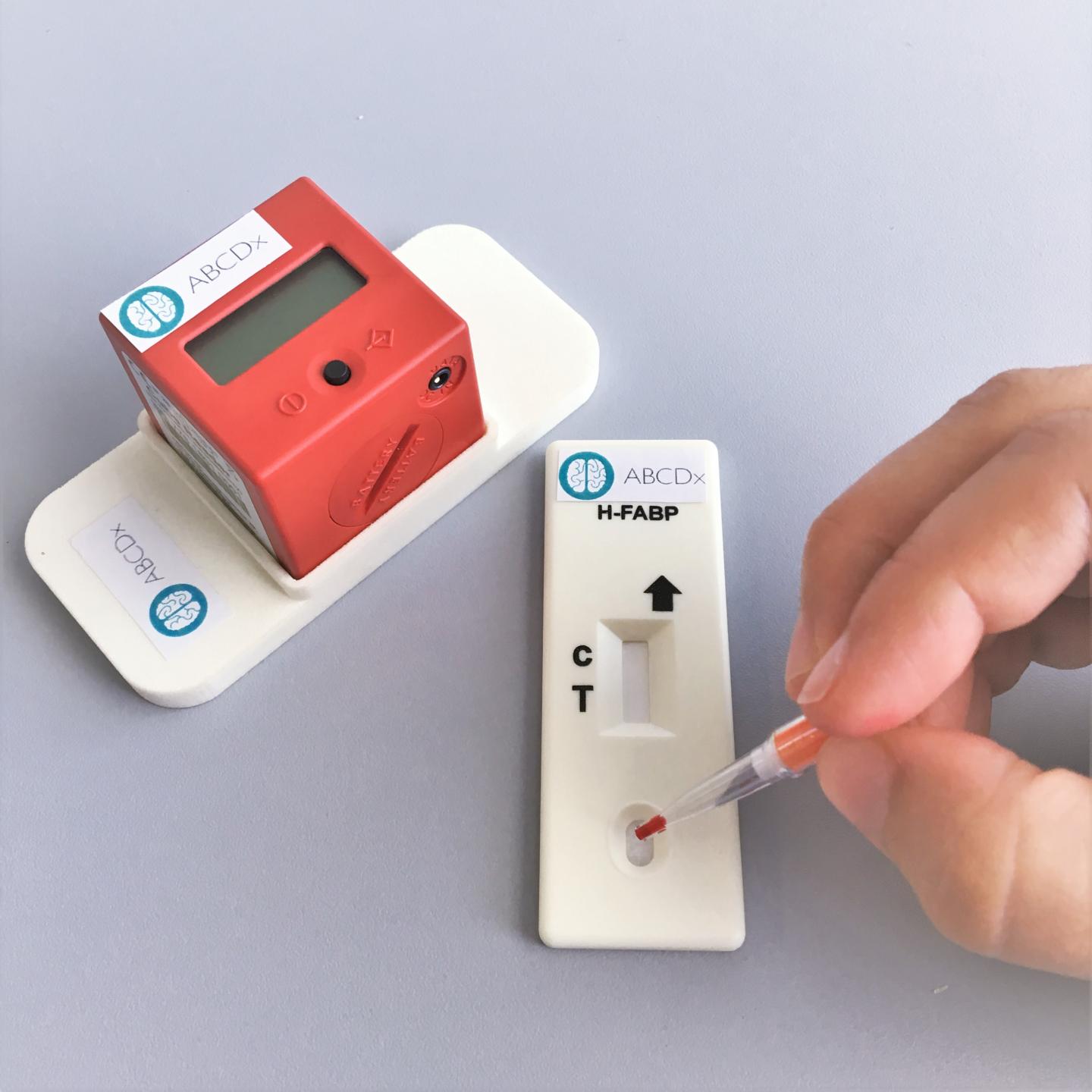 One drop of blood is enough for TBIcheck to diagnose a possible mild brain trauma. If a line appears below the control line, the injured person will have to go to the hospital for a CT scan. Credit: UNIGE

A team— which includes researchers from the University of Geneva (UNIGE) and hospitals in Barcelona, Madrid and Seville—has developed a small device that by analyzing the level of certain proteins in the blood can indicate the possibility of a mild traumatic brain injury using just a single droplet of blood.

“We wondered if it was possible to isolate certain proteins whose presence in the blood increases in the event of mild traumatic brain injury,” Jean-Charles Sanchez, professor at the Department of Internal Medicine of Specialties and the Biomarkers Centre of the Faculty of Medicine of the UNIGE, said in a statement. “Our idea was to find a way to do a quick examination that would allow, during a boxing or American football match for example, to determine whether the athlete can return to the field or if his condition requires hospitalization. The opposite of the CT Scan, an exam that lasts a long time and cannot be done anywhere.”

Head injuries can cause various symptoms, including blurred vision, vomiting, and the loss of consciousness or memory for following the event. There is then a risk of mild cerebral trauma, which represent more than 90 percent of the brain injuries admitted to hospitals, and often requires expensive CT Scans to diagnose the injury.

During a shock to the head, some brain cells are damaged and release proteins that increase their level in the blood. The researchers were able to compare the blood of patients admitted for mild traumatic brain injuries that were diagnosed as negative with that of patients suffering from a brain lesion.

They then used proteomic analysis to quantify thousands of proteins simultaneously and observe variations in their levels in the blood, and gradually isolated four molecules—H-FABP, Interleukin-10, S100B and GFAP—to indicate the presence of a brain injury.

The point of care test, dubbed TBIcheck, uses a single drop of blood on the well of a small five-centimeter plastic case and alerts the patient within 10 minutes whether there is a risk of mild trauma—particularly whether the H-FABP level is 2.5 nanograms per milliliter of blood.

“We have noticed that the H-FABP level alone makes it possible to confirm that there is no risk of trauma in one third of patients admitted after a shock,” Jean-Charles Sanchez said in a statement. “The rest of the patients will have to undergo a CT scan to confirm the diagnosis.”

A Cube Reader that will display positive or negative on the screen and send the result to a smartphone could also be installed.

The researchers next plan to refine the testing device, with the goal of developing a test capable of diagnosing brain trauma, strokes and aneurysms.

“Today, our research shows that the results are even more accurate when we combine H-FABP and GFAP levels,” Jean-Charles Sanchez said. “We are currently preparing an even more effective TBIcheck, which will allow 50% of patients to be sent home, but which requires an increase in the sensitivity of the test that receives the blood. Biomarkers are a mine of information on patients’ state of health, it is up to us to decode them.”

The study was published in PLOS One.