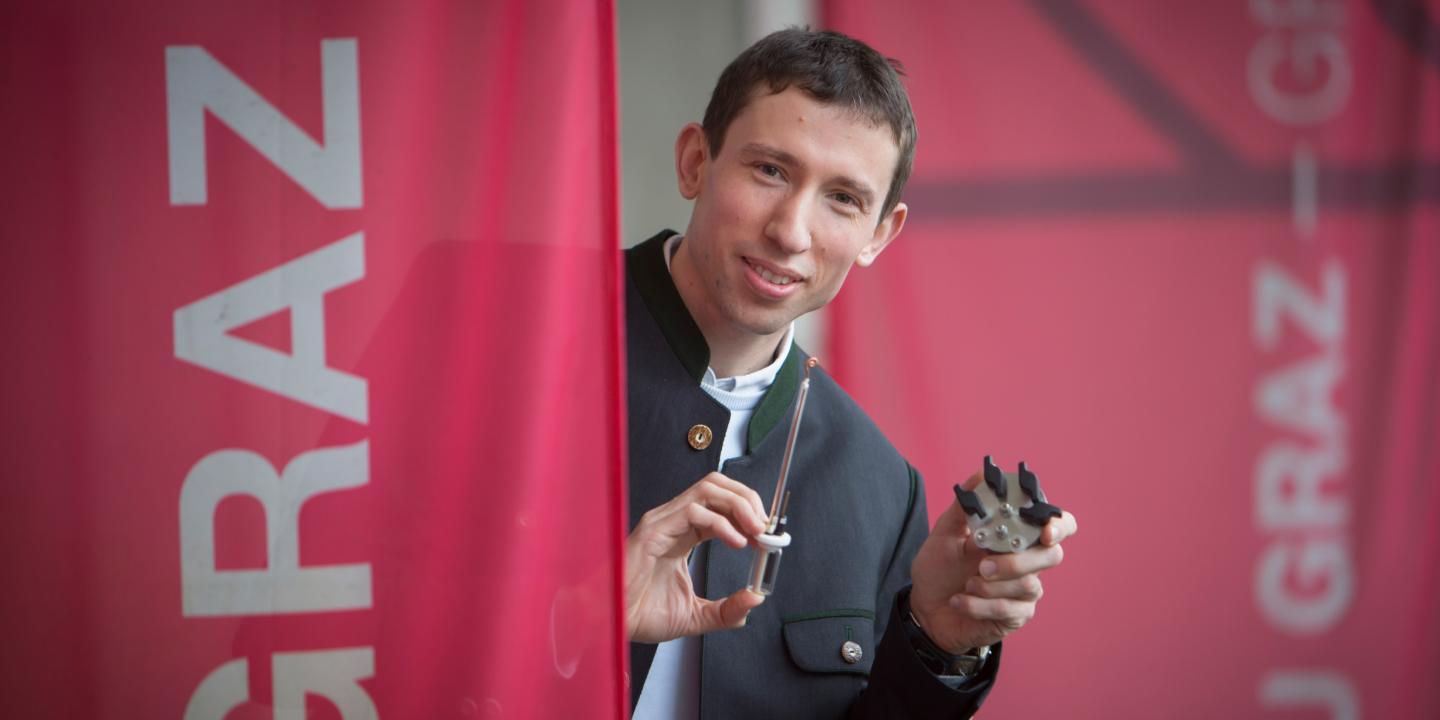 Stefan Freunberger, researcher at the Institute for Chemistry and Technology of Materials at Graz University of Technology, is one of the world's leading researchers in his field of battery research. Credit: © Lunghammer - TU Graz

Since 2012, Stefan Freunberger of the Institute for Chemistry and Technology of Materials at TU Graz has been working on development of a new generation of batteries with enhanced performance and longer useful lives, and which are also cheaper to produce than current models. He believes that lithium-oxygen batteries have significant potential. In 2017, in the course of his work, Freunberger uncovered parallels between cell ageing in living organisms and in batteries. In both cases, highly reactive singlet oxygen is responsible for the ageing process. This form of oxygen, which has been the focus of Freunberger's research over the past few years, is produced when lithium-oxygen batteries are charged or discharged. The Graz-based researcher has now found ways to minimise the negative effects of singlet oxygen, and his findings have been published in renowned journals Nature Communications and Angewandte Chemie.

In his paper in Nature Communications, Freunberger describes the effect of singlet oxygen on what are called redox mediators, which can be reversibly reduced or oxidised. The work was carried out in collaboration with researchers from South Korea and the USA. Redox mediators play a vital role in the flow of electrons between the exterior circuit and the charge storage material in oxygen batteries, and also have a considerable impact on their performance. The principle behind mediators is borrowed from nature, where they are responsible for a host of different functions in living cells, including transmitting nerve impulses and producing energy. "Until now it was assumed that redox mediators are deactivated by superoxides and peroxides. But our experiments have shown that this is due to the action of singlet oxygen," said Freunberger. The researchers used density functional theory calculations to demonstrate why certain classes of mediators are more resistant to singlet oxygen than others. They also identified its most likely avenues of attack. These insights are driving forward the development of new, more stable redox mediators. "The more stable the mediators, the more efficient, reversible and long-lasting the batteries become," Freunberger explained.

Besides deactivating redox mediators, singlet oxygen also triggers parasitic reactions, which compromise battery life and rechargeability. So, Freunberger tried to identify a suitable quencher that transforms the singlet oxygen produced into harmless triplet oxygen, which occurs in air - biology pointed him in the right direction: "An enzyme called superoxide dismutase blocks the formation of singlet oxygen in living cells. In its place, I used DABCOnium - which is a salt of the organic nitrogen compound DABCO - in my experiments." DABCOnium is an electrolyte additive which is much more resistant to oxidation than previously identified quenchers, and is compatible with a lithium-metal anode. In this way, for the first time Freunberger created conditions for charging lithium oxygen cells that were largely free of side reactions - in other words, without parasitic reactions. However, as Freunberger showed last year, singlet oxygen also causes problems in latest-generation lithium-ion batteries, as well as in oxygen batteries. This means that quenchers are also significant for the former. Freunberger published details of this singlet oxygen quencher in the journal Angewandte Chemie.

The next step in Freunberger's research will involve amalgamating his findings and developing a new class of mediators. These should be particularly resistant to attack from singlet oxygen and also combat it effectively by performing a quenching function. This would dramatically extend the lifetimes of lithium-oxygen batteries and maximise energy efficiency.

The project is part of the university's Field of Expertise 'Advanced Materials Science', one of five strategic research focuses at TU Graz. The project is funded by the Austrian Science Fund (FWF), the Austrian Research Promotion Agency (FFG) and the European Research Council (ERC). Stefan Freunberger is a member of NAWI Graz Chemistry.