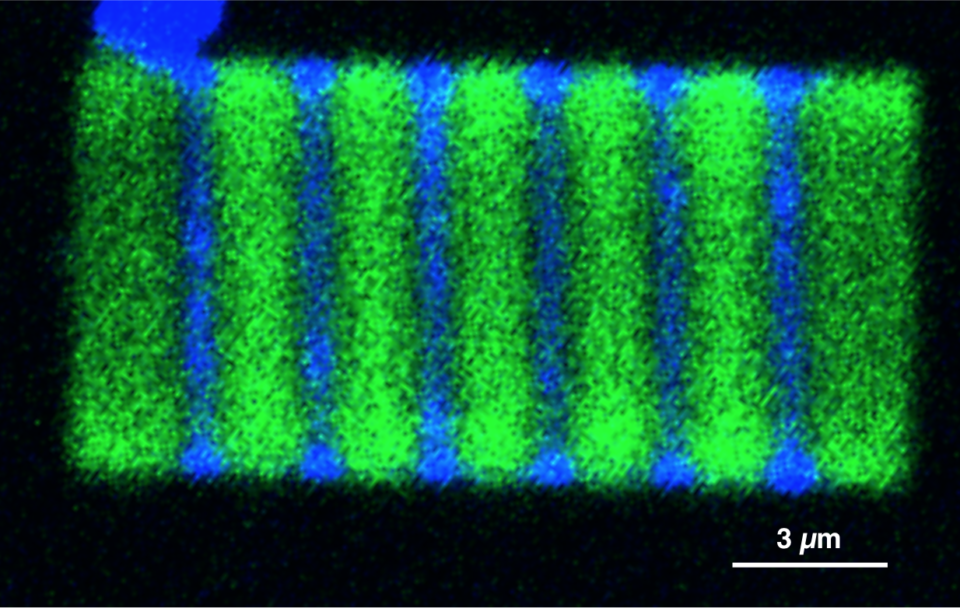 A new type of semiconductor may be coming to a high-definition display near you. Scientists at the Department of Energy’s Lawrence Berkeley National Laboratory (Berkeley Lab) have shown that a class of semiconductor called halide perovskites is capable of emitting multiple, bright colors from a single nanowire at resolutions as small as 500 nanometers.

The findings, published online this week in the early edition of the Proceedings of the National Academy of Sciences, represent a clear challenge to quantum dot displays that rely upon traditional semiconductor nanocrystals to emit light. It could also influence the development of new applications in optoelectronics, photovoltaics, nanoscopic lasers, and ultrasensitive photodetectors, among others.

The researchers pointed out that the lattice in halide perovskites is held together by ionic instead of covalent bonds. In ionic bonds, atoms of opposite charges are attracted and transfer electrons to each other. Covalent bonds, in contrast, occur when atoms share their electrons with each other.

“With inorganic halide perovskites, we can easily swap the anions in the ionic bonds while maintaining the single crystalline nature of the materials,” said study principal investigator Peidong Yang, senior faculty scientist at Berkeley Lab’s Materials Sciences Division. “This allows us to easily reconfigure the structure and composition of the material. That’s why halide perovskites are considered soft lattice semiconductors. Covalent bonds, in contrast, are relatively robust and require more energy to change. Our study basically showed that we can pretty much change the composition of any segment of this soft semiconductor.”

Each variation resulted in a different color emitted. Moreover, the researchers showed that multiple heterojunctions could be engineered on a single nanowire. They were able to achieve a pixel size down to 500 nanometers, and they determined that the color of the material was tunable throughout the entire range of visible light.

The researchers said that the chemical solution-processing technique used to treat this class of soft, ionic-bonded semiconductors is far simpler than methods used to manufacture traditional colloidal semiconductors.

“For conventional semiconductors, fabricating the junction is quite complicated and expensive,” said study co-lead author Letian Dou, who conducted the work as a postdoctoral fellow in Yang’s lab. “High temperatures and vacuum conditions are usually involved to control the materials’ growth and doping. Precisely controlling the materials composition and property is also challenging because conventional semiconductors are ‘hard’ due to strong covalent bonding.”

To swap the anions in a soft semiconductor, the material is soaked in a special chemical solution at room temperature.

“It’s a simple process, and it is very easy to scale up,” said Yang, who is also a professor of chemistry at UC Berkeley. “You don’t need to spend long hours in a clean room, and you don’t need high temperatures.”

The researchers are continuing to improve the resolution of these soft semiconductors, and are working to integrate them into an electric circuit.

The DOE Office of Science supported this work.