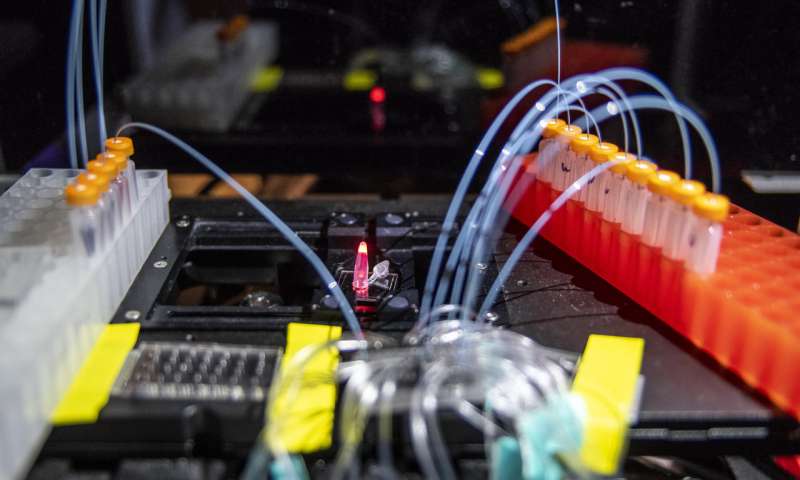 Scientists at the University of California, Berkeley, and Lawrence Berkeley National Laboratory have invented a new way to synthesize DNA that promises to be easier and faster, does not require the use of toxic chemicals and is potentially more accurate.

The researchers say the ease of use could lead to ubiquitous "DNA printers" in research labs, akin to the 3-D printers in many workshops today.

"If you're a mechanical engineer, it's really nice to have a 3-D printer in your shop that can print out a part overnight so you can test it the next morning," said UC Berkeley graduate student Dan Arlow. "If you're a researcher or bioengineer and you have an instrument that streamlines DNA synthesis, a 'DNA printer,' you can test your ideas faster and try out more new ideas. I think it will lead to a lot of innovation."

Arlow and colleague Sebastian Palluk, a doctoral student at the Technische Universität Darmstadt in Germany and a visiting student at Berkeley Lab, detail their new method in paper appearing online June 18 and scheduled for publication in the July issue of the journal Nature Biotechnology. They and their colleagues conducted the research at the Department of Energy's Joint BioEnergy Institute in Emeryville, California.

Palluk came from Germany specifically to work with Arlow on the DNA synthesis problem in Keasling's lab, which has been a pioneer in the field of synthetic biology. Keasling and JBEI scientists specialize in adding genes to microbes, mostly yeast and bacteria, to produce useful products—drugs, fuels, industrial chemicals—sustainably, with the least toxic byproducts and lowest energy use.

"We believe that increased access to DNA constructs will speed up the development of new cures for diseases and simplify the production of new medicines," Palluk said.

Synthesizing DNA is a growing business as companies order custom-made genes so they can produce biologic drugs, industrial enzymes or useful chemicals in vats of microbes. Researchers purchase synthetic genes to insert into plants or animals or try out new CRISPR-based disease therapies.

Some scientists have even proposed storing information in DNA, much like digital data is stored today in computer hard drives, since a gram of DNA could theoretically store the equivalent of 50 million DVDs and should be stable for centuries. However, that would mean synthesizing immensely larger quantities of DNA strands than those used in the biotech industry today.

All of these applications require that the synthesis process faithfully produces the desired sequence of nucleotides or bases—the building blocks of DNA—in each of millions or even billions of copies of DNA molecules.

Current DNA synthesis, which dates from 1981 and uses techniques from organic chemistry labs, is limited to directly producing so-called oligonucleotides about 200 bases long, because inevitable errors in the process lead to a low yield of correct sequences as the length increases. To assemble even a small gene, scientists have to synthesize it piecemeal, in segments about 200 bases long, and then stitch them together. This is time consuming, often requires multiple attempts and sometimes fails completely.

In addition, when ordered from synthesis companies like Twist Biosciences Inc. and Integrated DNA Technologies (IDT), the turnaround time for one small gene around 1,500 bases long can be two weeks at a cost of $300, limiting the number of genetic tweaks researchers can afford to try and the speed with which they can experiment. Synthetic biologists like Keasling, Arlow and Palluk often insert a dozen different genes at once into a microbe to get it to produce a desired chemical, and each gene presents its own synthesis problems.

"As a student in Germany, I was part of an international synthetic biology competition, iGEM, where we tried to get E. coli bacteria to degrade plastic waste. But I soon realized that most of the research time was spent just getting all the DNA together, not doing the experiments to see if the engineered cells could break down the plastic. This really motivated me to look into the DNA synthesis process," Palluk said.

Chemical DNA synthesis also requires using a particular type of activated DNA building block that is toxic, and repeated cycles of washing with petroleum-derived solvents. The problem of waste disposal and the fact that the process is finicky because it is extremely sensitive to moisture are reasons researchers have gotten rid of their personal oligonucleotide synthesizers and now have their DNA synthesized by specialized companies, Arlow said.

The new technique relies on a DNA-synthesizing enzyme found in cells of the immune system that naturally has the ability to add nucleotides to an existing DNA molecule in water, where DNA is most stable. The technique promises improved precision, which could allow synthesis of DNA strands 10 times longer, or several thousand bases long—the size of a medium-sized gene.

"We have come up with a novel way to synthesize DNA that harnesses the machinery that nature itself uses to make DNA," Palluk said. "This approach is promising because enzymes have evolved for millions of years to perform this exact chemistry."

Cell's do not typically synthesize DNA from scratch; they mostly copy it with the help of a lot of different polymerase enzymes that build on DNA templates already in the cell. In the 1960s, however, scientists found an unusual polymerase that doesn't rely on an existing DNA template, but randomly adds nucleotides to genes that make antibodies for use in the immune system. Called terminal deoxynucleotidyl transferase (TdT), the enzyme creates random variation in these genes so that the resulting antibody proteins are better able to target never-before-seen invaders.

TdT works equally well adding all four DNA nucleotides, does not have side-reactions that could screw up the resulting molecule, and is very fast, extending DNA by about 200 bases per minute if you let it free-wheel, Palluk said.

Numerous labs over the years tried to harness this enzyme to synthesize desired DNA sequences, but the enzyme was hard to control. The key requirement is to figure out how to get the enzyme to add one nucleotide and then stop, so that the desired sequence can be synthesized one base at a time. All of the previous proposals tried to achieve that control by using modified nucleotides that have a special blocking group that prevents multiple additions. After the DNA molecules have been extended by a blocked nucleotide, the blocking groups are removed to enable the next addition.

"Those approaches all have a lot in common with Next-Generation Sequencing technologies," Palluk said, referring to the state-of-the-art technique for reading out genetic sequences, which works by using a template-dependent polymerase to sequentially add blocked nucleotides that fluoresce in different colors to indicate which of the four possible bases was added.

Arlow's idea was to securely tether an unblocked nucleotide to TdT, so that after the nucleotide is added to a growing DNA molecule, the enzyme remains attached and itself protects the end of the chain from further additions. After the DNA molecule has been extended, they cut the linking tether to release the enzyme and re-expose the end for the next addition.

In their first trials—10 cycles using the engineered TdT enzyme to create a 10-base oligonucleotide—the Berkeley researchers showed that their faster and simpler technique is nearly as accurate in each step of the synthesis as current techniques.

"When we analyzed the products using NGS, we were able to determine that about 80 percent of the molecules had the desired 10-base sequence," Arlow said. "That means, on average, the yield of each step was around 98 percent, which is not too bad for a first go at this 50-plus-year-old problem. We want to get to 99.9 percent in order to make gene-length DNA."

Once they can reach 99.9 percent fidelity, they can synthesize a 1,000-base-long molecule in one go with a yield of more than 35 percent, which is completely impossible with current chemical synthesis techniques, Palluk said.

"By directly synthesizing longer DNA molecules, the need to stitch oligonucleotides together and the limitations arising from this tedious process could be reduced. Our dream is to directly synthesize gene-length sequences and get them to researchers within few days," he said.

"Our hope is that the technology will make it easier for bioengineers to more quickly figure out how to biomanufacture useful products, which could lead to more sustainable processes for producing the things that we all depend on in the world, including clothing, fuel and food, in a way that requires less petroleum," Arlow said.