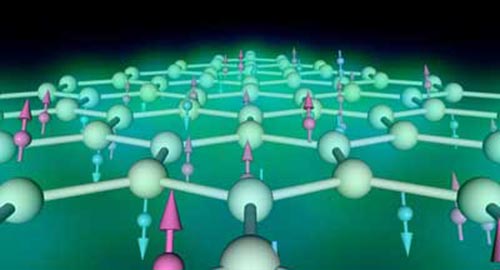 Calculations performed on the K computer reveal that stretching graphene will cause it to adopt a Kekulé-like state that is driven by interactions between electrons. Image: RIKEN Center for Computational Science

By using the powerful K supercomputer to simulate with unprecedented accuracy what happens to graphene as it is stretched, RIKEN researchers have discovered a new state of the material (Physical Review Letters, “Correlation-driven dimerization and topological gap opening in isotropically strained graphene”). This finding suggests new device applications for graphene.

Graphene is a single layer of carbon atoms arranged in a honeycomb pattern. It is one of the most highly conductive materials known and is the basis for a field of physics focusing on the exotic effects that can be achieved on such two-dimensional “topological” surfaces. Graphene is being intensively investigated for applications ranging from electronics and energy storage to optics and even tissue engineering.

The fantastic electrical conductivity of graphene is particularly useful for electronics, but graphene still needs to be integrated with non-conducting or insulating elements to provide useful functionality. For many years, Seiji Yunoki from the RIKEN Center for Computational Science has been seeking to ascertain the conditions under which graphene switches from conducting to insulating.

Previous modeling using a method that approximates electronic interactions en masse suggested that stretching the atomic lattice should turn it into an insulator. In particular, it suggested that when graphene is stretched uniformly in all directions, the strong electron correlations responsible for the high conductivity are broken, resulting in a fairly mundane ‘antiferromagnetic’ insulating state characterized by ordered magnetism.

But now, by using quantum simulation methods that model electron interactions explicitly, Yunoki and his colleagues have discovered that graphene instead transitions to a more exotic nonmagnetic topological state called a Kekulé-like dimerized nonmagnetic insulator (Fig. 1), which could have interesting technological applications.

“We initially wanted to know how much we have to stretch graphene to make it insulating, but we instead discovered an unexpected and surprising result,” says Yunoki.

The quantum Monte Carlo code was originally developed by lead author Sandro Sorella at the International School for Advanced Studies in Italy, with whom Yunoki undertook postdoctoral studies some 20 years ago — and it was RIKEN’s new K computer that proved to be the catalyst for reigniting this collaboration.

“This discovery only became possible using our quantum Monte Carlo simulations, for which RIKEN’s K computer was essential due to the extremely heavy computations involved,” notes Yunoki.

The researchers now intend to find out more about the nature of the phase transition as they expect it should be highly non-trivial.