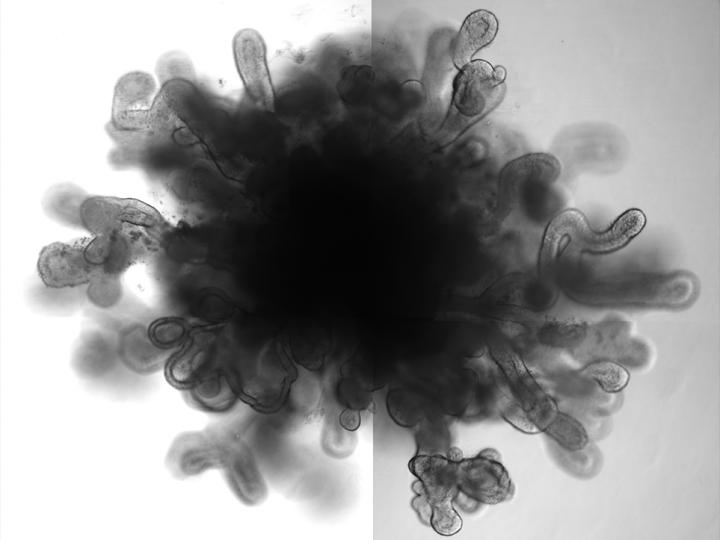 New lung “organoids”–tiny 3-D structures that mimic features of a full-sized lung–have been created from human pluripotent stem cells by researchers at Columbia University Medical Center (CUMC). The team used the organoids to generate models of human lung diseases in a lab dish, which could be used to advance our understanding of a variety of respiratory diseases.

A paper detailing the discovery was published in the April 24 online issue of Nature Cell Biology.

Organoids are 3-D structures containing multiple cell types that look and function like a full-sized organ. By reproducing an organ in a dish, researchers hope to develop better models of human diseases, and find new ways of testing drugs and regenerating damaged tissue.

“Researchers have taken up the challenge of creating organoids to help us understand and treat a variety of diseases,” said Hans-Willem Snoeck, PhD, professor of medicine (in Microbiology & Immunology) at CUMC and lead investigator of the study. “But we have been tested by our limited ability to create organoids that can replicate key features of human disease.”

The lung organoids created in Dr. Snoeck’s lab are the first to include branching airway and alveolar structures, similar to human lungs.

To demonstrate their functionality, the researchers showed that the organoids reacted in much the same way as a real lung does when infected with respiratory syncytial virus (RSV). Additional experiments revealed that the organoids also responded as a human lung would when carrying a gene mutation linked to pulmonary fibrosis.

RSV is a major cause of lower respiratory tract infection in infants and has no vaccine or effective antiviral therapy. Idiopathic pulmonary fibrosis, a condition that causes scarring in the lungs, causes 30,000 to 40,000 deaths in the U.S. each year. A lung transplant is the only cure for this condition.

“Organoids, created with human pluripotent or genome-edited embryonic stem cells, may be the best, and perhaps only, way to gain insight into the pathogenesis of these diseases,” Dr. Snoeck says.