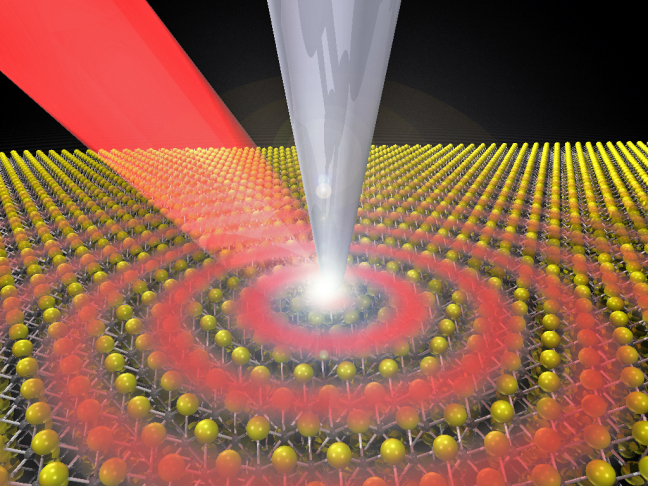 This image shows how researchers launched and studied half-light, half-matter quasiparticles called exciton-polaritons. A laser from the top left shines on the sharp tip of a nano-imaging system aimed at a flat semiconductor. The red circles inside the semiconductor are the waves associated with the quasiparticles. Larger image. Image courtesy of Zhe Fei.

A combination of light and matter could pave the way for much faster computers.

Zhe Fei, an assistant professor of physics and astronomy from Iowa State University and an associate of the U.S. Department of Energy’s Ames Laboratory, explained that a half-light, half matter quasiparticle moving inside a semiconductor could lead to faster computer circuits with high bandwidths.

“These are waves just like water waves,” Fei said in a statement. “It’s like dropping a rock on the surface of water and seeing waves. But these waves are exciton-polaritons.”

Like all quasiparticles, exciton-polaritons are created within a solid and have physical properties such as energy and momentum. The researchers launched the exciton-polaritons by shinning a laser on the sharp tip of a nano-imaging system aimed at a thin flake of molybdenum diselenide, a layered semiconductor that supports excitons.

This represents the first time real-space images of exciton-polaritons have been taken. The researchers were able to work at room temperature with the scanning near-field optical microscope to take nano-optical images of the quasiparticles.

According to Fei, the creation of exciton-polaritons at room temperature and their propagation characteristics enable developing future applications for the quasiparticles, including to build nanophotonic circuits to replace electronic circuits for nanoscale energy or information transfer.

“We need to explore further the physics of exciton-polaritons and how these quasiparticles can be manipulated,” Fei said.

The nanophotonic circuits could end up one million times faster than current electrical circuits.

The study was published in Nature Photonics.