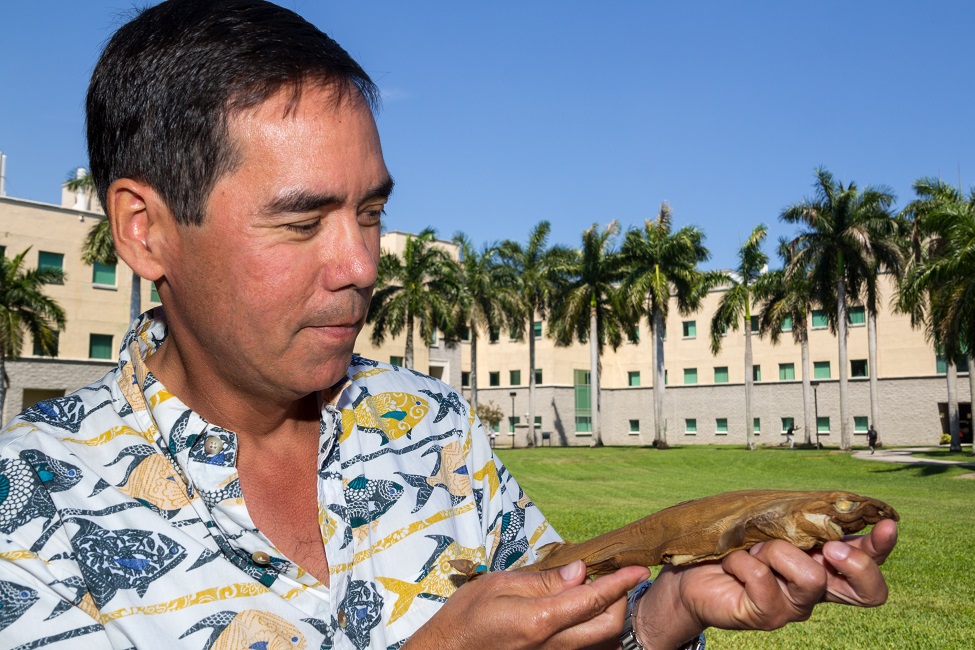 Stephen M. Kajiura, Ph.D., study co-author, a professor of biological sciences and director of the Elasmobranch Research Laboratory in FAU’s Charles E. Schmidt College of Science, is among the team of scientists who painstakingly worked on this project. Credit: Florida Atlantic University

The newest shark species is a far cry from the Great White Shark, Tiger Shark and other predators of the water.

The species—found 1,000 feet deep in the Pacific Ocean off the coast of the Northwestern Hawaiian Islands— is part of the Lanternshark family and glows in the dark similar to other members of the family.

“There are only about 450 known species of sharks worldwide and you don’t come across a new species all that often,” Stephen Kajiura, Ph.D., a professor of biological sciences and director of the Elasmobranch Research Laboratory in the Charles E. Schmidt College of Science at Florida Atlantic University, said in a statement.

“A large part of biodiversity is still unknown, so for us to stumble upon a tiny, new species of shark in a gigantic ocean is really thrilling,” he added. “This species is very understudied because of its size and the fact that it lives in very deep water. They are not easily visible or accessible like so many other sharks.”

The species was first discovered 17 years ago but was not officially recognized until recently.

Kajiura explained some of the unusual features of the new shark.

“The unique features and characteristics of this new species really sets it apart from the other Lanternsharks,” he said. “For one thing, it has a strange head shape and an unusually large and bulgy snout where its nostrils and olfactory organs are located.

“These creatures are living in a deep sea environment with almost no light so they need to have a big sniffer to find food.”

The shark also has flank markings that go forward and backward on their stomachs and a naked patch without scales on the underside of its snout. The shark also has internal differences including the number of vertebrae they have as well as fewer teeth than other sharks.

Similar to other Lanternsharks, the new species glows in the dark but has different markings on their belly and tail.

Researchers have long believed that Lanternsharks glow in the dark for either mate recognition to ensure they are mating with the right species, serve as a form of camouflage to protect themselves from predators or to act as a lure to attract prey like smaller fish or shrimp.

“The research team’s discovery of a new shark species is evidence of how much is still undiscovered in our world,” Ata Sarajedini, Ph.D., dean of FAU’s Charles E. Schmidt College of Science, said in a statement. “This new species is the tip of the iceberg for what else might be out there and the great potential for all of the yet-to-be undescribed species that still need to be explored.”