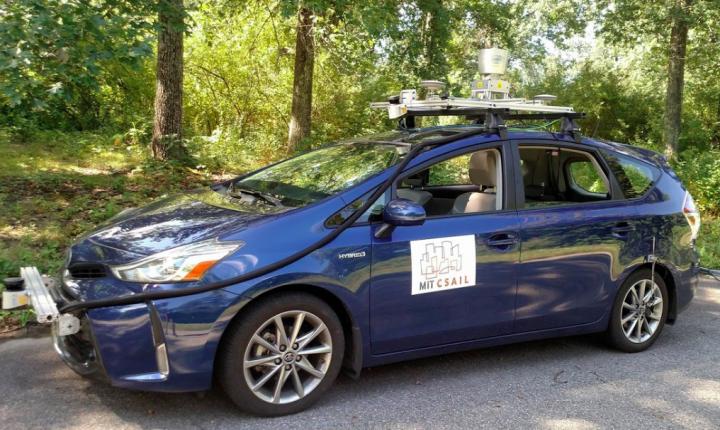 Uber's recent self-driving car fatality underscores the fact that the technology is still not ready for widespread adoption. One reason is that there aren't many places where self-driving cars can actually drive. Companies like Google only test their fleets in major cities where they've spent countless hours meticulously labeling the exact 3D positions of lanes, curbs, off-ramps and stop signs. Credit: MIT CSAIL

Researchers are hoping to reduce the inherent danger of testing autonomous cars in major cities with a new navigation system that will allow companies like Google and Uber to test fleets of self-driving cars on unpaved country roads.

A team from the Massachusetts Institute of Technology’s (MIT) Computer Science and Artificial Intelligence Laboratory (CSAIL) has created  MapLite—an advanced navigation system that allows self-driving vehicles to bypass 3D maps and drive on roads they’ve never been on before.

Companies looking to move forward with autonomous vehicles have been testing fleets of self-driving vehicles in metropolitan areas, which requires a substantial amount of time to map out the exact 3D positions of lanes, curbs, off-ramps and stop signs.

There is also a danger to testing the technology in population centers, which has resulted in the death of at least one pedestrian in Arizona from a self-driving Uber vehicle.

The new system combines simple GPS data with a series of sensors that observe the road conditions, allowing the autonomous vehicle to drive on unpaved country roads and reliably detect the road more than 100 feet in advance.

“The reason this kind of 'map-less' approach hasn't really been done before is because it is generally much harder to reach the same accuracy and reliability as with detailed maps,” CSAIL graduate student Teddy Ort, who was a lead author on of the study, said in a statement. “A system like this that can navigate just with on-board sensors shows the potential of self-driving cars being able to actually handle roads beyond the small number that tech companies have mapped.”

Autonomous vehicles rely heavily on maps, only using sensors and vision algorithms to avoid dynamic objects in their path like pedestrians and other motorists.

The new system utilizes sensors for all aspects of navigation, while only relying on navigation data to obtain a rough estimate of the vehicle’s location.

MapLite first sets both a final destination and a local navigation goal—which has to be within view of the autonomous vehicle. The perception sensors then generate a path to get to that point by using LIDAR to estimate the location of the road’s edges, which the system can do without physical road markings by making basic assumptions of how the road will be relatively more flat than the surrounding areas.

“Our minimalist approach to mapping enables autonomous driving on country roads using local appearance and semantic features such as the presence of a parking spot or a side road,” MIT professor Daniela Rus said in a statement.

The researchers developed a system of models that are “parameterized”—meaning they describe multiple situations that are somewhat similar. For example, one model might be broad enough to determine what to do at intersections, or what to do on a specific type of road.

“At the end of the day we want to be able to ask the car questions like ‘how many roads are merging at this intersection?’” Ort said. “By using modeling techniques, if the system doesn't work or is involved in an accident, we can better understand why.”

The researchers tested the system on multiple country roads in Devens, Massachusetts with a Toyota Prius that they outfitted with a range of LIDAR and IMU in a partnership with the Toyota Research Institute.

While the system has had some success on country roads, it is still not reliable enough to be used for mountain roads because it does not account for dramatic changes in elevation.

The team now will look to expand the variety of roads a MapLite vehicle can handle.

“I imagine that the self-driving cars of the future will always make some use of 3D maps in urban areas,” Ort said. “But when called upon to take a trip off the beaten path, these vehicles will need to be as good as humans at driving on unfamiliar roads they have never seen before. We hope our work is a step in that direction.”