Two-dimensional materials are a sort of a rookie phenom in the scientific community. They are atomically thin and can exhibit radically different electronic and light-based properties than their thicker, more conventional forms, so researchers are flocking to this fledgling field to find ways to tap these exotic traits.

Applications for 2-D materials range from microchip components to superthin and flexible solar panels and display screens, among a growing list of possible uses. But because their fundamental structure is inherently tiny, they can be tricky to manufacture and measure, and to match with other materials. So while 2-D materials R&D is on the rise, there are still many unknowns about how to isolate, enhance, and manipulate their most desirable qualities.

Now, a science team at the Department of Energy’s Lawrence Berkeley National Laboratory (Berkeley Lab) has precisely measured some previously obscured properties of moly sulfide, a 2-D semiconducting material also known as molybdenum disulfide or MoS2. The team also revealed a powerful tuning mechanism and an interrelationship between its electronic and optical, or light-related, properties.

To best incorporate such monolayer materials into electronic devices, engineers want to know the “band gap,” which is the minimum energy level it takes to jolt electrons away from the atoms they are coupled to, so that they flow freely through the material as electric current flows through a copper wire. Supplying sufficient energy to the electrons by absorbing light, for example, converts the material into an electrically conducting state.

As reported in the Aug. 25 issue of Physical Review Letters, researchers measured the band gap for a monolayer of moly sulfide, which has proved difficult to accurately predict theoretically, and found it to be about 30 percent higher than expected based on previous experiments. They also quantified how the band gap changes with electron density – a phenomenon known as “band gap renormalization.”

“The most critical significance of this work was in finding the band gap,” said Kaiyuan Yao, a graduate student researcher at Berkeley Lab and the University of California, Berkeley, who served as the lead author of the research paper. 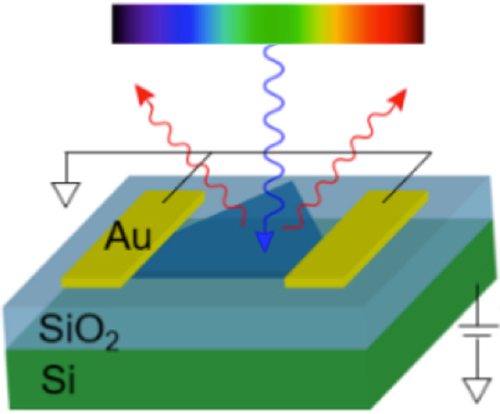 “That provides very important guidance to all of the optoelectronic device engineers. They need to know what the band gap is” in orderly to properly connect the 2-D material with other materials and components in a device, Yao said.

Obtaining the direct band gap measurement is challenged by the so-called “exciton effect” in 2-D materials that is produced by a strong pairing between electrons and electron “holes” ­– vacant positions around an atom where an electron can exist. The strength of this effect can mask measurements of the band gap.

Nicholas Borys, a project scientist at Berkeley Lab’s Molecular Foundry who also participated in the study, said the study also resolves how to tune optical and electronic properties in a 2-D material.

“The real power of our technique, and an important milestone for the physics community, is to discern between these optical and electronic properties,” Borys said.

The team used several tools at the Molecular Foundry, a facility that is open to the scientific community and specializes in the creation and exploration of nanoscale materials.

The Molecular Foundry technique that researchers adapted for use in studying monolayer moly sulfide, known as photoluminescence excitation (PLE) spectroscopy, promises to bring new applications for the material within reach, such as ultrasensitive biosensors and tinier transistors, and also shows promise for similarly pinpointing and manipulating properties in other 2-D materials, researchers said.

The research team measured both the exciton and band gap signals, and then detangled these separate signals. Scientists observed how light was absorbed by electrons in the moly sulfide sample as they adjusted the density of electrons crammed into the sample by changing the electrical voltage on a layer of charged silicon that sat below the moly sulfide monolayer.

Researchers noticed a slight “bump” in their measurements that they realized was a direct measurement of the band gap, and through a slew of other experiments used their discovery to study how the band gap was readily tunable by simply adjusting the density of electrons in the material.

“The large degree of tunability really opens people’s eyes,” said P. James Schuck, who was director of the Imaging and Manipulation of Nanostructures facility at the Molecular Foundry during this study.

“And because we could see both the band gap’s edge and the excitons simultaneously, we could understand each independently and also understand the relationship between them,” said Schuck, who is now at Columbia University. “It turns out all of these properties are dependent on one another.”

Kaiyuan Yao works with equipment at Berkeley Lab’s Molecular Foundry that was used to help measure a property in a 2-D material. (Credit: Marilyn Chung/Berkeley Lab)

Moly sulfide, Schuck also noted, is “extremely sensitive to its local environment,” which makes it a prime candidate for use in a range of sensors. Because it is highly sensitive to both optical and electronic effects, it could translate incoming light into electronic signals and vice versa.

Schuck said the team hopes to use a suite of techniques at the Molecular Foundry to create other types of monolayer materials and samples of stacked 2-D layers, and to obtain definitive band gap measurements for these, too. “It turns out no one yet knows the band gaps for some of these other materials,” he said.

The team also has expertise in the use of a nanoscale probe to map the electronic behavior across a given sample.

The Molecular Foundry is a DOE Office of Science User Facility that provides free access to state-of-the-art equipment and multidisciplinary expertise in nanoscale science to visiting scientists.

Researchers from the Kavli Energy NanoSciences Institute at UC Berkeley and Berkeley Lab, and from Arizona State University also participated in this study, which was supported by the National Science Foundation.