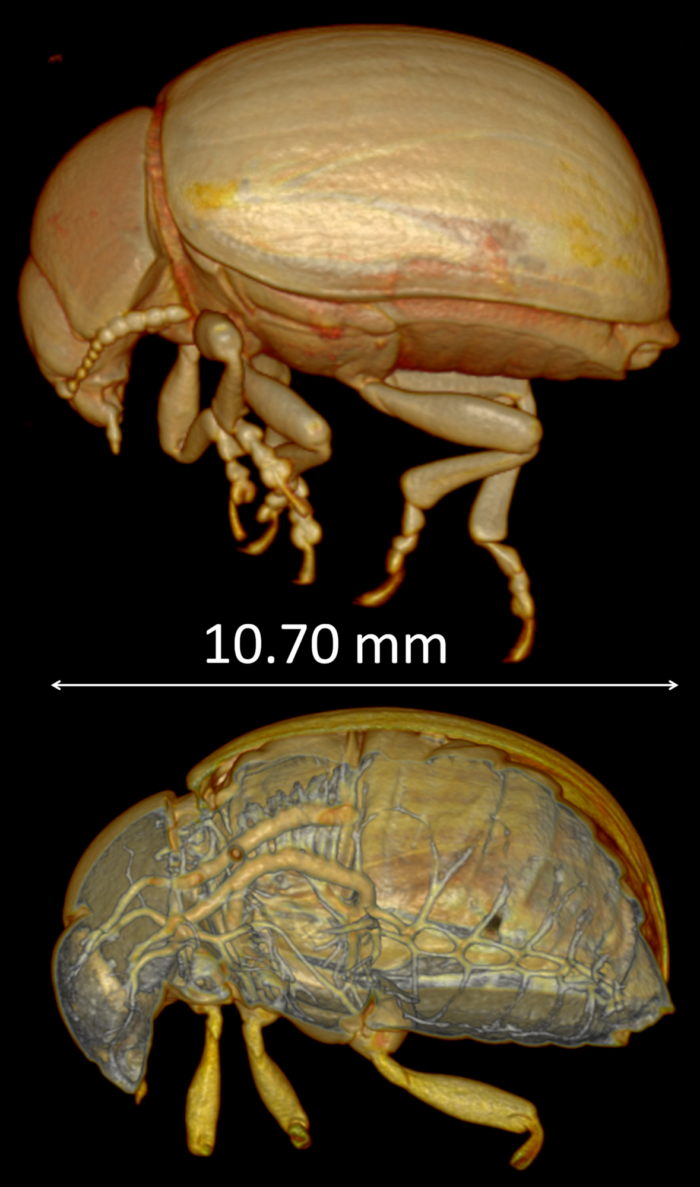 Until now, insects have been too wriggly to make good subjects for scientists wanting to understand more about insect innards.

But an interdisciplinary team of biologists and imaging specialists from Western University has worked out a novel micro-imaging solution that’s leading to unprecedented new ways of viewing insect development.

The team has managed to create spectacularly detailed, three-dimensional views of insects’ insides — without harming them in any way — by using carbon dioxide to place them into a state of temporary suspended animation.

The methodology and results have started making waves beyond the journal BioMed Central,where their paper is newly published.

PhD candidate Joanna Konopka, an insect biologist, was interested in finding a non-invasive way to examine more thoroughly the life-cycle of live insects — including Colorado potato beetles and true armyworms, agricultural pests that wreak havoc in crops across North America.

But standard techniques — using dead insects or killing them during the imaging process —still leave crucial gaps in scientists’ understanding.  “We essentially had snapshots, moments in time, when what we needed were dynamic images of insects’ internal development,” said Konopka. “We thought, what would happen if we tried to image them live?”

She teamed up with colleague Danny Poinapen, a biophysicist at the micro-CT lab at Robarts Research Institute, and together they developed a technique that builds on insects’ peculiar ability to withstand oxygen-low environments and high ionizing radiation doses.

They temporarily immobilized the insects with a steady flow of carbon dioxide, for as long as seven hours at a time, and again several days later. They found it was possible to scan for, and study, tiny changes in the creatures over time — with no effect on the insects’ longevity, behaviour or reproductive abilities.

“I was absolutely awed,” Konopka said. “I’m familiar with pictures and drawings in books but this gives us a wholly new perspective of what they are.”

Said Poinapen, “I am trained as a physicist and I had no idea that I would get this ‘wow’ factor the first time I saw those images.”

The resolution shows detail to 20 microns — about five times smaller than the width of a human hair — and clearly shows the organs, reproductive systems and other internal morphology. (At 0:43 in the Colorado potato beetle video image, for example, the insect’s tracheal system is clearly visible.)

“It’s a great example of how the interdisciplinary environment can benefit everyone’s research,” said Poinapen.  “In our micro-CT lab, we know a lot about small-animal imaging — but knew very little about insects or our capacity to live-scan them until we teamed up with our biology colleagues.”

The team included Konopka and Poinapen; Robarts Research Institute imaging scientist David Holdsworth, who is the Dr. Sandy Kirkley Chair in Musculoskeletal Research; and Biology Professor Jeremy McNeil, who is Helen I. Battle Professor of Chemical Ecology at Western University.

The bigger picture, said Holdsworth and McNeil, is the value of collaborative process and inter-disciplinary research.

“This is a great example of something that would not be possible in a typical biology lab, nor in a typical medical research lab. We were able to draw together the strength of our diverse expertise and resources,” said Holdsworth, who is also a professor at Western’s Schulich School of Medicine and Dentistry.

“This is the kind of thing that we’re supposed to be doing at universities: cultivating the scientific curiosity that says ‘what would happen if …?’ and then accomplishing something spectacular and, in many ways, unexpected,” Holdsworth said.