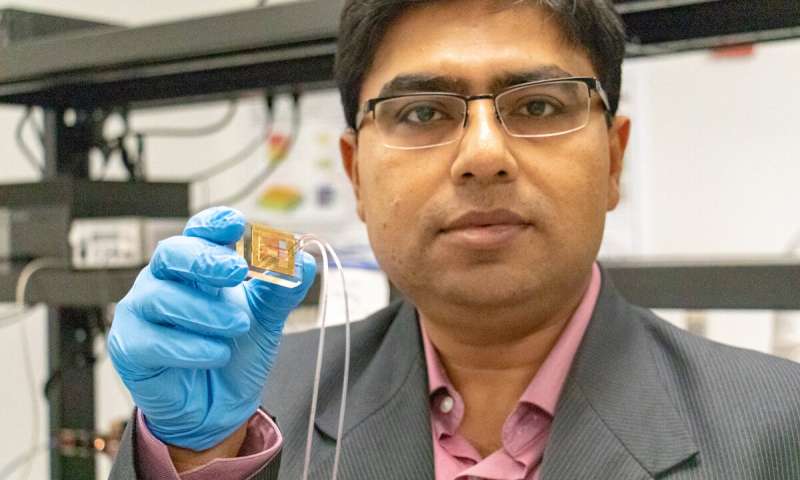 Using nanotechnology, UCF researchers have developed the first rapid detector for dopamine, a chemical that is believed to play a role in various diseases such as Parkinson’s, depression and some cancers. Credit: University of Central Florida

A newly created sensor could help doctors identify various brain disorders almost immediately by detecting how much dopamine is in the blood.

Researchers from the University of Central Florida (UCF) believe that their enzyme-free plasmonic neurotransmitter dopamine biosensor, integrated with a microfluidic plasma separator, could rapidly detect dopamine levels in the brain with only a few drops of blood, providing results on a number of diseases in just a few minutes rather than several hours.

Both too much dopamine and too little is tied to several diseases. Excessive dopamine has been associated with various cancers, while lower levels can be found in patients inflicted with Parkinson’s disease and depression. To detect dopamine, doctors currently need to use specialized lab equipment in a time-consuming process that includes rigorous sample preparation like blood-plasma separation.

The new sensor is a palm-sized, rectangular chip that will read dopamine levels with just a couple of drops of blood.

“A neurotransmitter like dopamine is an important chemical to monitor for our overall well-being so we can help screen out neural disorders like Parkinson’s disease, various brain cancers, and monitor mental health,” Debashis Chanda, an associate professor in UCF’s NanoScience Technology Center and the study’s principle investigator, said in a statement. “We need to monitor dopamine so that we can adjust our medical doses to help address those problems.”

The chip’s surface is coated with cerium oxide nanoparticles that allow it to separate plasma from the patient’s blood on the chip. The device allows the in-line separation of plasma directly from the bloodstream and channels it to an active detection area where the inorganic cerium oxide nanoparticles function as local selective dopamine binding sites through strong surface redox reactions.  When dopamine molecules are captured, changes in how light is reflected from the sensor are seen, creating an optical readout that indicates the overall levels of dopamine.

“Getting the sensor to be sensitive to dopamine had been quite the challenge for researchers for a while, but using altered cerium oxide nanostructures on the sensing platform was key in making the sensor work,” Sudipta Seal, an engineering professor and chair of UCF’s Department of Materials Science and Engineering, said in a statement.

The researcher’s new chip can be produced without a lot of steps or processing, making it cost effective. The test can also be conducted at the patient’s side without the need of an outside lab.

“There is no preprocessing needed,” Abraham Vázquez-Guardado, a graduate of UCF’s College of Optics and Photonics and now a postdoctoral fellow at Northwestern University, said in a statement. “Our plan was to make a much quicker, enzyme-free kind of detection.”