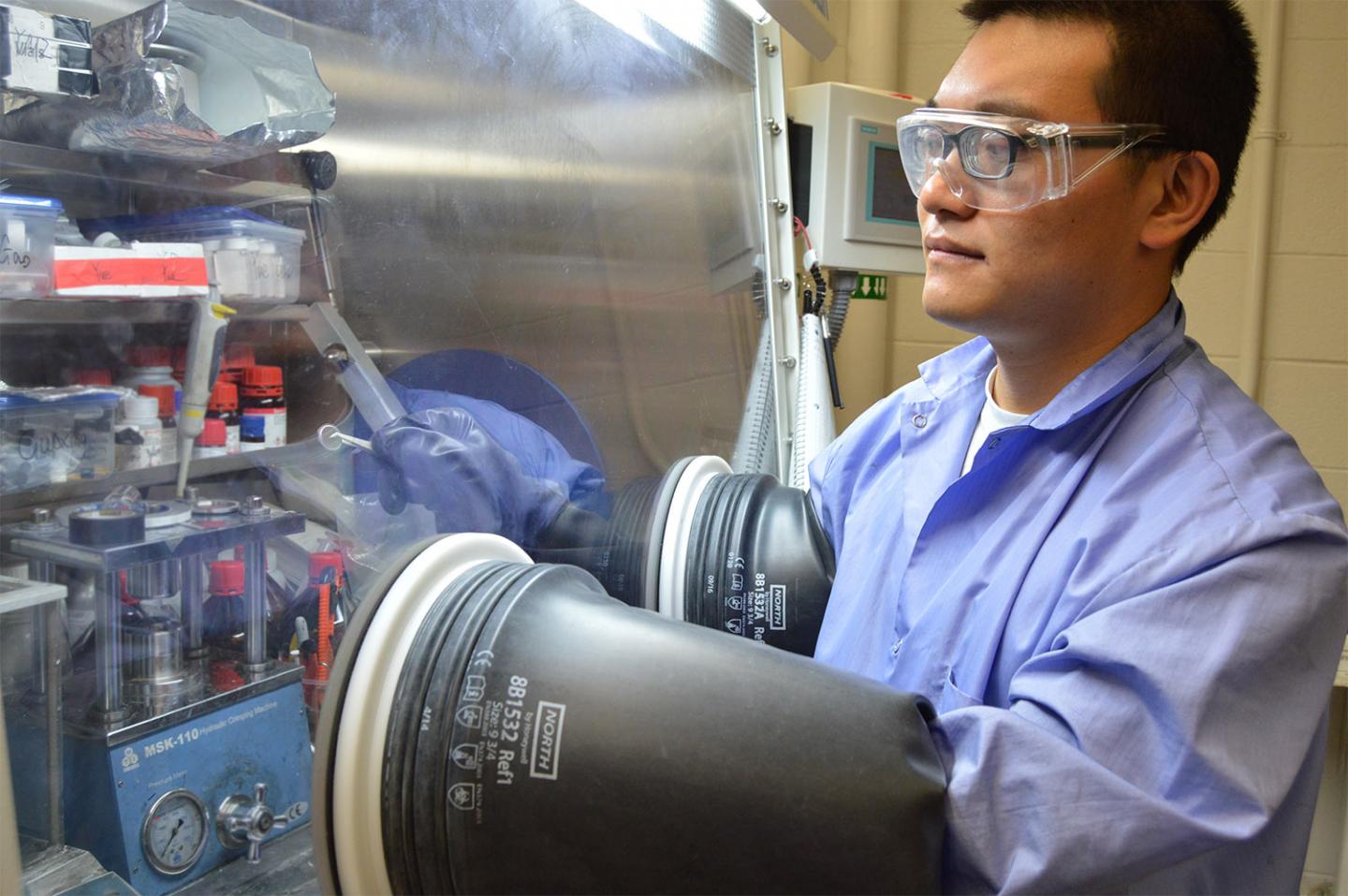 Zhaoxin Yu, postdoctoral researcher in mechanical and nuclear engineering, puts together the components of a battery.

A newly discovered structure of a sodium-based material allows the materials to be used as an electrolyte in solid-state batteries, according to researchers from Penn State and Pacific Northwest National Laboratory (PNNL). The team is fine-tuning the material using an iterative design approach that they hope will shave years off the time from research to everyday use.

The electrolyte, one of three main parts of a battery, is responsible for transferring charged ions in a solid-state battery. This creates an electrical current once the other two parts of the battery, the anode and cathode, are connected in a circuit.

Most rechargeable batteries in smart-phones, computers and other consumer electronics use a liquid, lithium-based electrolyte.

“Liquid electrolytes have safety issues because they are flammable,” said Donghai Wang, associate professor of mechanical engineering, Penn State. “That has been the driving force for us to find a good material for use in solid-state batteries.”

The team’s new material is composed of sodium, phosphorous, tin and sulfur and has a tetragonal crystal shape. It has defects, or spaces where certain sodium, tin and sulfur atoms would be, and these allow for it to transfer ions.

Because sodium is much more abundant than lithium, a sodium-ion battery would potentially be far cheaper to produce than a lithium-ion battery. The material also would be safer to use.

“Our material has a wide voltage window as well as high thermal stability,” said Zhaoxin Yu, postdoctoral researcher in mechanical and nuclear engineering, Penn State. “When you heat liquid electrolytes up to 150 degrees Celsius (302 degrees Fahrenheit), they will catch fire or release a lot of heat that could damage other battery or electronic components. Our material performs well up to 400 degrees Celsius (752 degrees Fahrenheit).”

The team reported in Nano Energy that their material has room-temperature ionic conductivity about one-tenth that of liquid electrolytes used in today’s batteries. The important discovery, they said, is the specific configuration of defects within the crystal structure.

“Our discovery of this new structure of this material also shows us that there’s a pathway for creating a new family of advanced sodium-ion superionic conductors,” said Shun-Li Shang, research professor in materials science and engineering, Penn State.

The team created and tested this new battery in Wang’s laboratory, which is part of Penn State’s Battery and Energy Storage Technology Center. Using their collaborative design process, the team has been able to identify how different crystal formations, as well as inconsistencies in the material, have affected its performance.

“If you don’t have this set of tools, it would be difficult to make a breakthrough,” said Zi-Kui Liu, distinguished professor of materials science and engineering, Penn State. “Our approach that uses both computation and experiments allows us to analyze the reason why materials perform differently. That will make things faster for the next round of design because we know what we need to control in order to enhance ion transportation.”

A portion of the team’s modeling took place on supercomputers hosted by Penn State’s Institute for CyberScience.