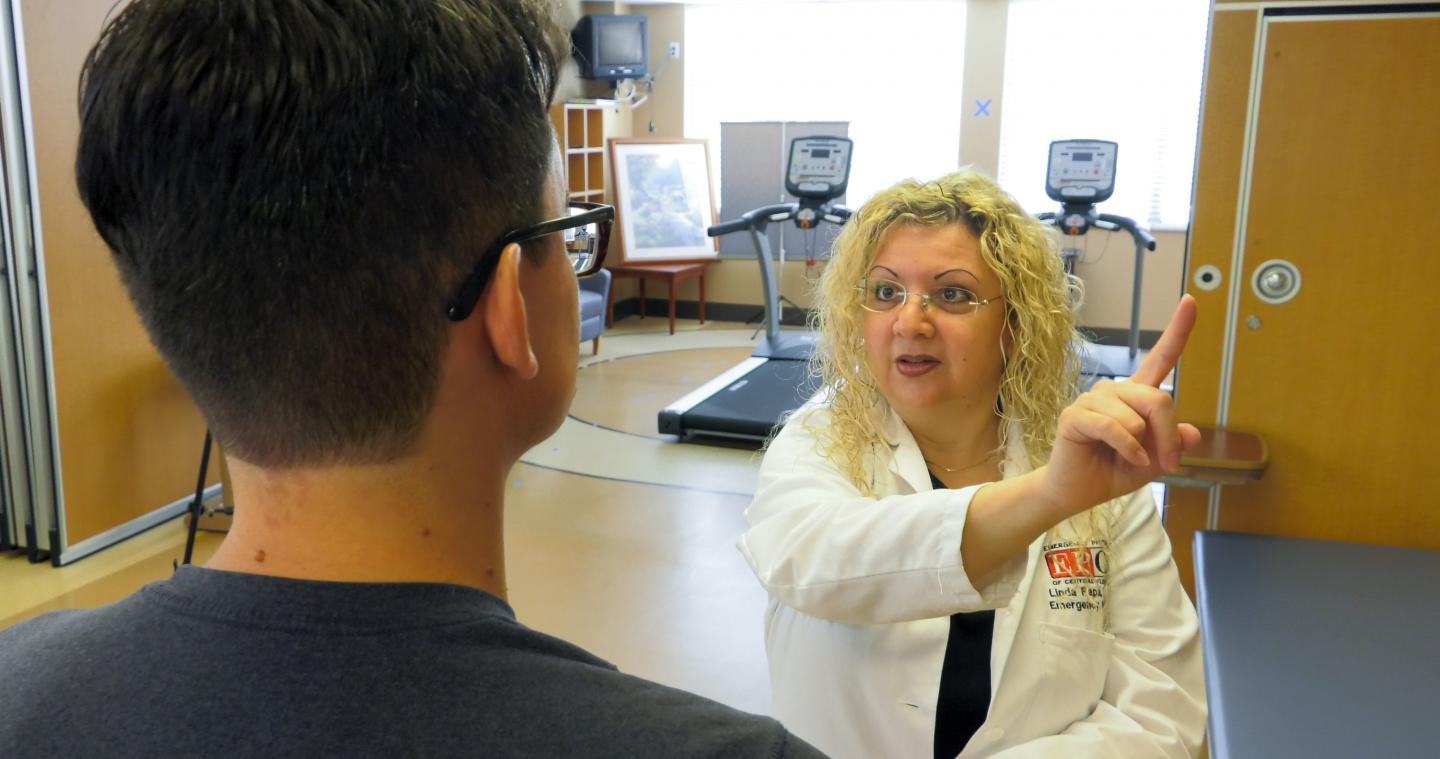 Linda Papa, M.D., performs a neurologic exam. She led a study at Orlando Health that found that college football players who had issues with things like memory and balance also had elevated biomarkers in their blood that indicate evidence of brain injuries. Credit: Orlando Health

There have been more and more cases confirming that repeated hits to the head have lifelong consequences for professional football players, but a new study by Orlando Health in collaboration with the Concussion Neuroimaging Consortium finds evidence of lasting effects from head injuries at a much younger age than expected. The study tested biomarkers in the blood called microRNA’s and found that the college football players had elevated levels of these biomarkers that indicate concussions before the season even started.

“It was quite shocking to learn that the biomarkers were high before they were even involved in one hit or tackle for the season,” said Linda Papa, MD, lead author of the study and emergency medicine physician at Orlando Health “This suggests that the effects of past head injuries are persisting over time.”

Researchers also conducted cognitive tests with each study participant before and after the season and found that those who struggled with balance and memory had higher levels of the biomarkers. “Some of these players had never been diagnosed with a concussion but they still had elevated biomarker levels in their blood, indicating they likely experienced head injuries that were not severe enough to be clinically diagnosed, but still caused damage. These injuries are also known as subconcussive injuries,” said Papa.

Papa says that these biomarkers can potentially help identify those less severe head injuries so that players can get the proper treatment.

“We’re hoping that the biomarkers are actually going to give us a quantity of injury, rather than just saying whether this a concussion or not,” said Papa. “We can say to these players, ‘Yes, I can see you have had an injury because the levels of the biomarkers are elevated, and now we are going to help you.'”

While concussion protocols and improved equipment have helped in recent years, this new research shows how important it is to monitor players’ brain health and understand how continuous hits can lead to chronic issues. “There is a lot more awareness about head injuries than there used to be, and it’s really up to each parent to do their research and talk to coaches and athletic trainers,” said Papa. “Researchers from across the country are coming together to examine this issue. Once we’re aware of the dangers and risks, we can take steps to minimize them and keep the sport as it should be, a healthy activity for everybody to participate in.”

Health concerns were part of Austen Rankin’s decision to hang up his cleats in the middle of his college football career. He was sidelined by a concussion once in college, but says he likely suffered concussions while playing football growing up that were undiagnosed.

“Being injured was seen as just part of the game,” said Rankin. “When you took a hard hit, you just got up, shook it off and kept going. Maybe the next day you couldn’t think clearly or light would bother you, but when I was younger there weren’t procedures in place to deal with that.”

Austen is now a trainer and coach, and helps educate other players about protecting themselves and playing smart. “It can be really tough to put aside your love for the game and put your health first,” said Rankin. “I didn’t want to be 40 or 50 years old and have memory problems, so I decided to stop playing and focus on my future career.”

Papa says, in the future, testing for these microRNA biomarkers will potentially serve as measures of neurocognitive status and help to identify at-risk athletes to monitor them more closely so they get the treatment they need early.