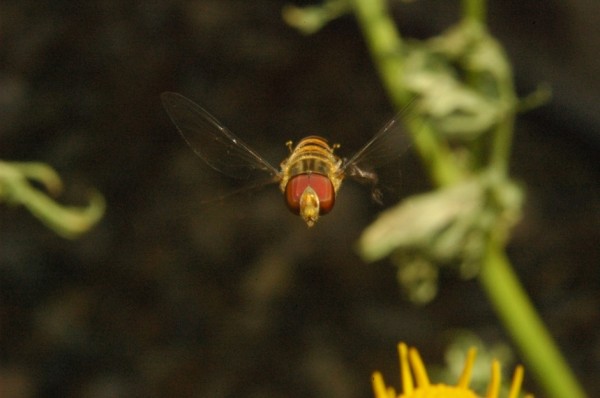 Where do insects go in winter? A new study published in the ournal Science found that flying insects migrate on a seasonal basis. This movement constitutes the largest migration found in today’s world, creating a mass that is almost eight times that of birds that migrate from Britain to Africa. “The migration of 3.5 trillion insects, with a biomass over seven times that of the birds that migrate from Britain to Africa, has significant ecological ramifications. Insects are highly sensitive to climate change, and this may lead to dramatic changes in the population of migrating insects, causing important environmental changes,” explains Dr. Nir Sapir of the Department of Evolutionary and Environmental Biology at the University of Haifa, who is one of the authors of the article.

Although flying insects constitute one of the largest populations on the planet, no comprehensive quantitative study has been undertaken until now examining the phenomenon of insect migration. Researchers assumed that many insect populations migrate, but did not know which insects do so, when, what the scope of migration is, and so forth. A broad-based international study undertaken by researchers from the University of Haifa, Nanjing Agricultural University, the University of Exeter, the Hebrew University of Jerusalem, the University of Greenwich, and Rothamsted Research has now changed this picture. In order to collect data, radars were installed some 15 years ago in southern England. Data from these radars was used to estimate insect bio-flow over an area of 70,000 square kilometers. The radars measured the weight of the insects, their flight speed and their direction and height. For very small insects that weigh less than 10 mg and are not picked up by the radar, special nets were used to catch samples in the air. Between 2000 and 2009, data were collected for insects flying at height of over 150 meters above.

The findings clearly showed a southward movement of these insect populations in fall and a northward movement in spring. The researchers were surprised by the scale of this phenomenon: some 3.5 trillion insects, creating a biomass of 3,200 tons, migrated in each season. The study did not examine the starting points and destinations of each insect population, but the researchers believe that this migration takes place over distances of at least several hundred kilometers, and possibly much more. “Since there is evidence that this migration also takes place over sea, and since Great Britain is an island, these insects must have come to Britain in the spring, and at least some of them must reach continental Europe in the fall,” Dr. Sapir explains.

Also surprisingly, the data also showed that insects use the wind in order to reach their destination, choosing to “hitch a ride” on specific wind flows. The insects exploited the southerly winds in spring and the northerly winds in the fall. “They actually chose the direction they wanted to go in. We were surprised to find that insects make conscious use of navigation capabilities in order to reach their destinations using these winds,” said Dr. Sapir. The larger insects even combined their natural flight speed with the wind in order to reach a speed of up to 58 kilometers per hour during the migration seasons.
These findings have ramifications for many ecosystems, and even for our own everyday lives. In most cases, insects’ bodies include 10 percent nitrogen and one percent phosphorus. This makes them excellent fertilizer for plants and crops and nutritious food for insect eaters, such as birds, bats, and other animals. In addition, insects also pollinate, constitute crop pests as well as killing some other pest insects, transfer diseases and parasites, and play other functions. “Such a large biomass has tremendous importance for the functioning of diverse ecosystems across large parts of the globe, and for other aspects of our daily lives,” Dr. Sapir explains. “Cycles of nitrogen and phosphorus in nature are extremely significant, particularly since these chemicals form a limited component in the food chain. This massive movement of insects transports these vital materials across enormous distances.”

The important ramifications of insect migration highlight a further finding by the researchers: The total biomass of insects varies from one year to another, with the difference sometimes being as great as 200 tons. They explain that more insects are born in warmer summers, and accordingly the quantity of migration is greater. Conversely, in cooler summers fewer insects are born, and accordingly the biomass is smaller. Global climactic changes mean that the climate around the world is getting warmer, and accordingly it can be assumed with a large degree of certainty that the number of insects will increase significantly. “We do not know yet whether all types of insects are reproducing more, or whether only certain types are doing so. An increase in the number of some insects could be harmful, while in other cases it could actually be beneficial. Accordingly, it is too soon to tell whether this change should be welcomed. But what is certain is that this is the largest and most influential continental migration in the world, as far as we know to date. We need to start monitoring it carefully,” Dr. Sapir concludes.