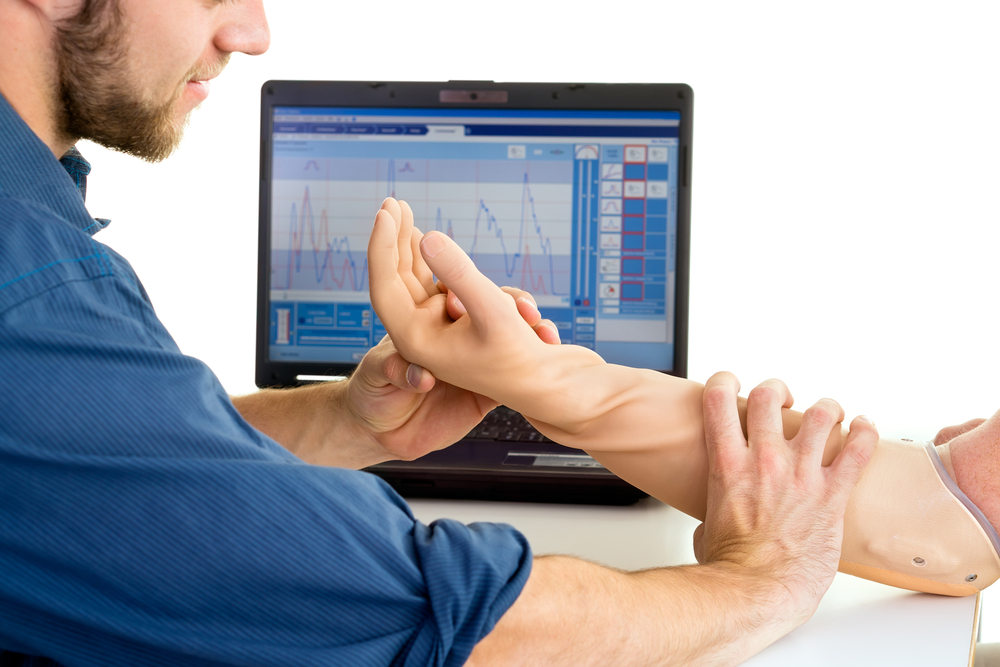 A new bioelectronic feedback system is giving amputees a muscle sense that will allow them to discern the size of an object without visual proof.

Researchers from Rice University and the University of Pisa have partnered to create the Rice Haptic Rocker, a prosthetic hand that connect to the user’s nerves to enable a more functional hand that gives feedback to the body and allows the user to perform more tasks.

Marcia O’Malley, a professor of mechanical engineering at Rice University, said in an exclusive interview with R&D Magazine that her team created a soft hand that can be used by amputees, which contain a rotating device that brushes a soft rubber pad over the skin of the arm to signify whether the prosthetic hand is open or closing.

“It is just a little 3D printed device that pushes the skin in on your arm and the amount that it pushes your skin is proportionate to the degree that the prosthetic hand is open or closed,” O’Malley said. “So if the hand is open it is in a neutral position and as the hand closes it stretches your skin more and more.

“It gives you a sense so you can do tasks without looking and visually attending to the hand,” she added. “What we expect is by providing additional feedback you’d have better performance and functionality with this prosthetic hand.”

According to O’Malley, one of the issues with the current crop of prosthetic hands is the user must be looking at the hand to know exactly how it is performing various everyday tasks and to get a sense as to how strong the grasp is when using it to pick up an object.

O’Malley said the goal of the Rice Haptic Rocker is to allow amputees to perform everyday tasks that able bodied individuals are able to do with ease, like reaching into your pocket to grab your cell phone or a handful of change.

“These amputees who always use prosthetic limbs have to look at what they are doing, so we try to give them functionality, more independence, more intuitive control over the hand,” O’Malley said. “Both of those are probed using surface electrodes for recording muscles signals.

“So we put electrodes on the surface of the skin, so for an abled bodied individual you put them on the forearm or the biceps and for an amputee you integrate them into their stump, which goes into a socket,” she added. “They detect changes and voltage potential that are generated by our muscles through the nerves command of the muscles through these electrical signals that then cause the muscles to contract.”

O’Malley said an embedded controller in the hand is used to control a motor that tightens a signal cable that runs through all the fingers of the hand.

She said the feedback features is enabled in a non-invasive way with a module that can be fastened around the arm that provides feedback by detecting the cues that the nerves and sensors in the skin are providing.

The researchers experimented with 18 able-bodied participants who used the soft hand and were asked to identify the size of various objects while blindfolded.

According to O’Malley, when there was no feedback used on the hand the participants more or less guessed how big the objects were, while when feedback was enhanced they were able to identify the objects with 70 to 75 percent accuracy.

She said the researchers will now move forward and test the product on amputees.

The researchers presented the new paper on June 7 at the World Haptics 2017 conference in Fürstenfeldbruck, Germany.

There are an estimated 1.7 million people in the U.S. living with a loss