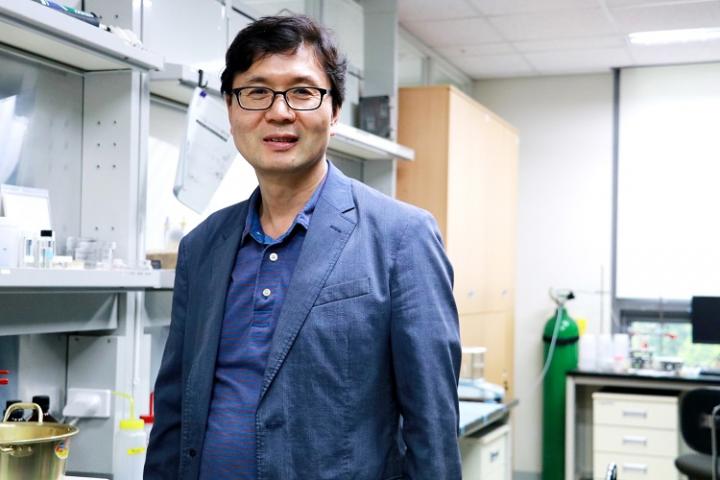 A research team led by DGIST Professor Jong-Sung Yu’s team at the Department of Energy Science and Engineering has successfully developed a new catalyst synthesis method that can efficiently decompose water into oxygen and hydrogen using solar light. It is expected that this method will facilitate hydrogen mass production due to higher efficiency than the existing photocatalyst method.

Due to the intensifying environmental problems such as air pollution and global warming caused by the increased use of fossil energy, hydrogen is recently drawing attention as an ecofriendly energy source of next generation. Accordingly, research is being conducted globally on how to produce hydrogen using solar light and photocatalyst by decomposing water. To overcome the limitations of photocatalyst that only reacts to light in ultraviolet rays, researchers have doped dual atom such as Nitrogen (N), Sulfur (S), and Phosphorus (P) on photocatalyst or synthesized new photocatalysts, developing a photocatalyst that reacts efficiently to visible light.

With Professor Samuel Mao’s team at UC Berkeley in the U.S., Professor Yu’s research team developed a new H-doped photocatalyst by removing oxygen from the photocatalyst surface made of titanium dioxide and filling hydrogen into it through the decomposition of MgH2. Energy of long wavelength including visible light could not be used for the existing white Titanium dioxide because it has a wide band gap energy. However, the development of MgH2reduction could overcome this through oxygen flaw induction and H-doping while enabling the use of solar light with 570nm-wavelength.

MgH2 reduction can synthesize new matters by applying to Titanium oxide used in this research as well as the oxides composed of other atoms such as Zr, Zn, and Fe. This method is applicable to various other fields such as photocatalyst and secondary battery. The photocatalyst synthesized in this research has four times higher photoactivity than the existing white titanium dioxide and is not difficult to manufacture, thus being very advantageous for hydrogen mass production.

Another characteristic of the photocatalyst developed by the research team is that it reduces band gap more than the existing Titanium dioxide photocatalyst used for hydrogen generation and can maintain four times higher activity with stability for over 70 days.

The new method can also react to visible light unlike existing photosynthesis, overcoming the limitation of hydrogen production. With the new photocatalyst development, the efficiency and stability of hydrogen production can both dramatically improved, which will help popularize hydrogen energy in the near future.

Professor Yu said “The photocatalyst developed this time is a synthesis method with much better performance than the existing photocatalyst method used to produce hydrogen. It is a very simple method that will greatly help commercialize hydrogen energy. With a follow-up research on improving the efficiency and economic feasibility of photocatalyst, we will take the lead in creating an environment stable hydrogen energy production that can replace fossil energy.”

This study has been published on August 10 on the online edition of Applied Catalysis B: Environmental, a top 1% international journal in the chemical engineering catalyst field.