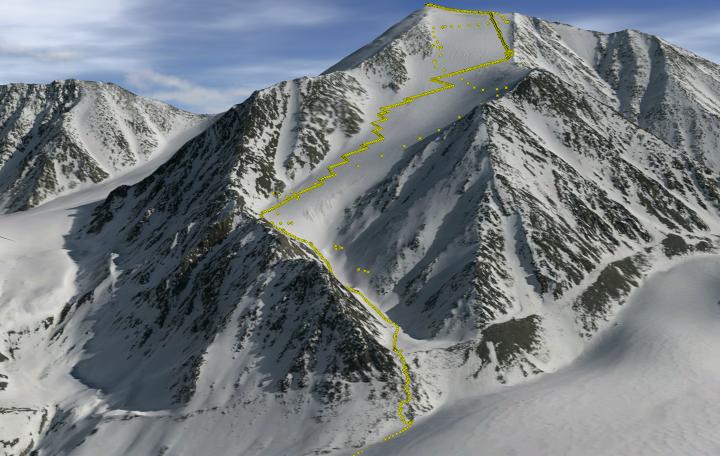 Mt Isto, the tallest peak in the US Arctic, shown as a 3-D visualization of fodar data. Yellow dots indicate position of some of the ground control GPS data collected during the climbing expedition. Closely spaced points are on the climb up, widely spaced points are on the ski down. Source: Nolan & DesLauriers, The Cryosphere, 2016/Fairbanks Fodar

Finding out which is the highest mountain in the US Arctic may be the last thing on your mind, unless you are an explorer who skis from the tallest peaks around the globe. Ski mountaineer Kit DesLauriers joined forces with glaciologist Matt Nolan to settle a debate of more than 50 years, while testing a new, affordable mapping technique in a steep mountainous region. Their research is published today (23 June) in The Cryosphere, an open access journal of the European Geosciences Union (EGU).

At 6190m, Denali is the uncontested highest peak in North America, but beyond the Arctic Circle, a debate remains as to which US mountain can be crowned the tallest. Depending on the scale of the map you look at, the 1950s US Geological Survey’s topographic maps of the eastern Alaska Arctic show either Mt Chamberlin or Mt Isto as the highest mountain in the region.

“These mountain peaks just happened to be located in the same area as the glaciers we were studying and several of the peaks ended up in our maps,” says Nolan, a professor at the University of Alaska Fairbanks and the lead-author of the study. He had been mapping glacier volume change in the Brooks Range using a technique called fodar, which he invented. “Because we were interested in understanding the performance limitations of fodar in steep mountain terrain, it seemed a natural fit to combine this validation testing with settling the debate on which peak was the tallest.”

Fodar is used to survey and map terrain using airborne photography. It’s similar to airborne lidar, which relies on laser equipment mounted on an aircraft to scan the landscape and create 3D maps of the terrain, but is much more affordable. “The core equipment is a modern, professional DSLR camera, a high-quality lens, a survey-grade GPS unit, and some custom electronics to link the camera to the GPS,” Nolan explains.

“A modern airborne lidar unit that can map steep mountain terrain like the one we studied costs over 500,000 USD and typically requires a twin engine plane and a separate equipment operator. In contrast, the fodar hardware costs under 30,000 USD if bought new (much cheaper if you buy used) and can be operated by the pilot flying in a small single-engine plane.”

Taking to the skies, Nolan flew his Cessna 170B to map the Brooks Range peaks. Meanwhile, DesLauriers, a professional athlete and the first person to ski down the highest peaks of the 7 continents, was on the ground climbing up and then skiing down Mt Isto and Mt Chamberlin. During the trek, she tracked her position using the same type of GPS unit Nolan used in his plane.

“The GPS antenna, mounted to a steel post in my backpack, required a constant unobstructed view of the sky which forced me to find creative ways to adapt my usual ski carrying system while climbing,” DesLauriers says. “Instead of a normal rest stop to eat and hydrate, I used the rare moments standing still to note my location and time in a field journal so that Matt could have as much data as possible to compare our measurements. The process made climbing the peaks, which took on average a 10 hr summit push after a multi-day approach, more difficult but also more rewarding.”

Nolan explains why this challenging expedition was needed: “The general idea is to measure elevations from the air at about the same time someone is measuring them on the ground. These ground control points then get compared to the airborne measurements and the difference between them is a measure of accuracy.”

With an accuracy of better than 20cm, Nolan and DesLauriers found that Mt Isto is, at 2735.6m, the tallest peak in the US Arctic while Mt Chamberlin (2712.3m) is only the third highest peak. Fodar measurements also showed a third peak, Mt Hubley, surpasses Mt Chamberlin by about 5m, taking up second place in the list of highest US Arctic mountains. Nolan and DesLauriers believe it is plausible that the ranking has changed over time, and may continue to change as summit glaciers dwindle, though not enough to remove Mt Isto from the top.

Fodar has helped settled this debate, but the applications of the technique extend far beyond measuring mountain heights. “Though determining peak heights was a fun and useful study, our primary use for fodar is in change detection in the cryosphere [the planet’s frozen regions].” In addition to measuring peak heights, they are using the same maps to study how snow and glacier melt will affect the region.

Nolan has also used fodar to measure coastal erosion, permafrost melt, landslides, ice jams, and infrastructure degradation, mostly in Alaska. Elsewhere, he has been discussing fodar projects to study landscape and ecological change in the Galapagos, flooding dynamics in desert regions of Botswana, and even earthquake relief in Nepal. “The possibilities are truly unlimited.”