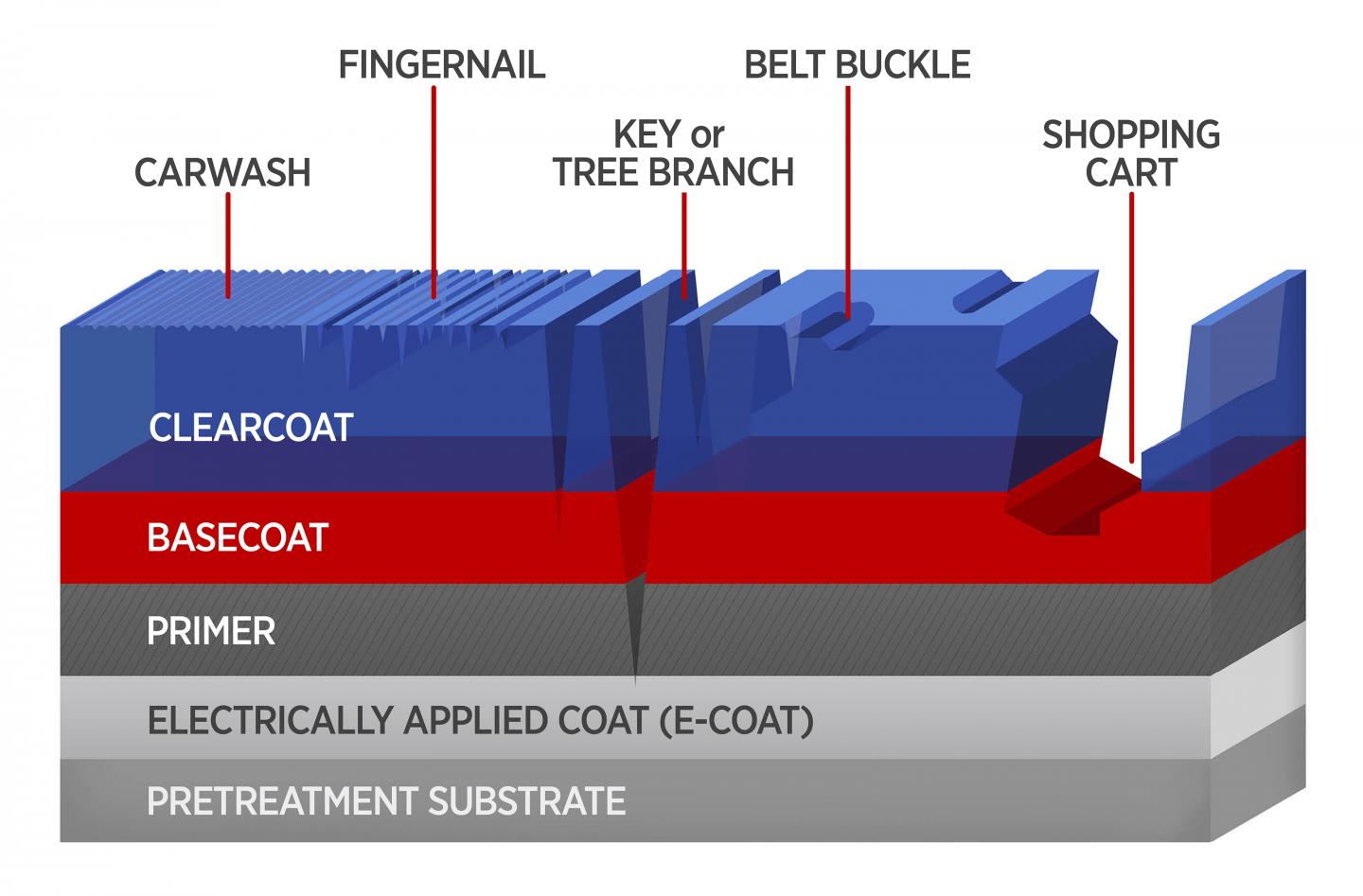 Schematic of the coating layers in a typical automobile composite body. Mar and scratch damages from a variety of object impacts are shown. Credit: Eastman Chemical Co./ K. Irvine, NIST

Researchers from the National Institute of Standards and Technology (NIST) have developed a new series of tests that could help manufacturers develop better auto coatings to protect vehicles against dents and scratches.

The researchers first used a diamond-tipped stylus across the surface of a polymer composite sample to map the morphology in the test. They then used the stylus to create a scratch, and retapped and remapped the surface. They conducted nano, micro and macro scratch tests using different sized tips and different ranges of force.

They collected data on the quantitative differences between the pre-scratch and post-scratch profiles, including the vulnerability to deformation, fracture resistance and resilience, as well as the microscopic analysis of the scratches.

“Data from the nano-scratch test also proved best for determining how well the coating responded to physical insult based on its crosslink density, the measure of how tightly the polymer components are bound together,” NIST physicist Li Piin Sung, one of the authors of the new paper, said in a statement. “With this molecular-level understanding, clearcoat formulas can be improved so that they yield materials dense enough to be scratch resistant and resilient but not so hard that they cannot be worked with easily.”

The goal of the tests is to give manufactures a better grasp of the mechanisms behind the processes that lead to deformities so that future coating materials can be made more scratch resistant and resilient.

Automobile coating manufacturers currently use two tests to evaluate clearcoat scratch resistance and predict field performance called the crockmeter, a robotic device that moves back and forth with varying degrees of force to mimic damage from human contact and abrasive surfaces and the Amtech-Kistler car wash, which is a rotating wheel of brushes that simulate the impact of car washes on clearcoats.

“Unfortunately, both methods only assess clearcoat performance based on appearance, a qualitative measure where the results vary from test to test, and they don’t provide the quantitative data that scientifically helps us understand what happens to auto finishes in real life,” Sung said.

“We demonstrated a test method that characterizes scratch mechanisms at the molecular level because that’s where the chemistry and physics happens … and where coatings can be engineered to be more resilient.”

Recent studies show that people are holding onto their vehicles longer than before, putting an emphasis on more robust coatings. Statistics show that between 2006 and 2015 those owning cars for more than two years rose by 41 percent. In addition, an estimated 600,000 driver’s work for ride-sharing companies like Uber and Lyft, which require the freelance drivers to maintain the upkeep on the appearance of their vehicles.

According to the researchers, about 60 percent of all consumer complaints about automobiles are attributed to paint scratches and chip imperfections.

Sung said the new tests should be utilized in conjunction with current industry standard methods to test scratch resistance of coatings.

“That way, one gets the complete picture of an auto body coating, both qualitatively and quantitatively characterized, so that the tougher coatings created in the lab will work just as well on the road,” Sung said.