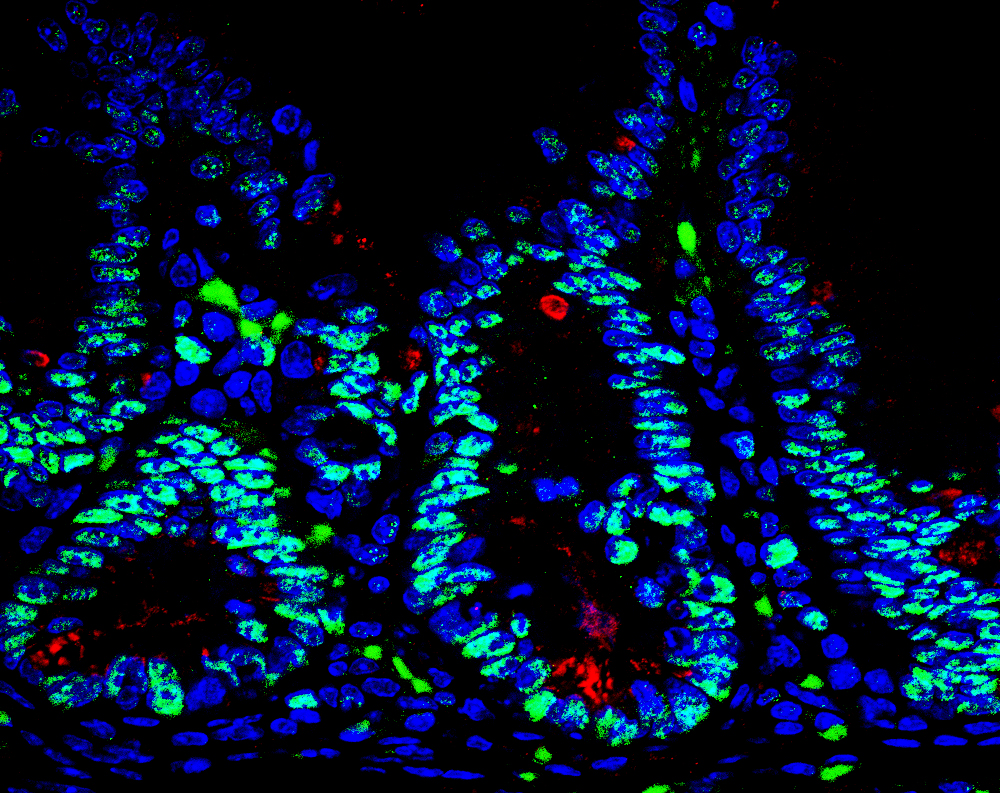 “The intestine is protected by specialized cells, called Paneth cells, that secrete antimicrobial peptides,” said Jorge Moscat, Ph.D., deputy director and professor in the NCI-designated Cancer Center and senior author of the paper. “We found that maintaining normal numbers of Paneth cells requires PKC λ/ι, and that the amount of PKC λ/ι decreases as IBD gets worse. We also discovered a way to prevent Paneth cell loss—inhibiting a protein called EZH2, which could be a new therapeutic strategy for IBD.”

IBD, which includes Crohn’s disease and ulcerative colitis, affects 1.4 million people in the U.S. These chronic conditions are often debilitating, as they cause unpredictable abdominal pain and diarrhea. Because current medications only help control symptoms and not the underlying disease, 70% of Crohn’s patients and 30% of those with colitis must eventually undergo surgery. In addition, IBD increases risk of intestinal cancer by as much as 60%.

“We also examined the effect of PKC λ/ι on tumor formation,” said Maria Diaz-Meco, Ph.D., also a professor in the Cancer Center and co-author of the paper. “In contrast to some previous studies indicating that it might promote cancer development, we demonstrate that in the intestine, PKC λ/ι is protective.”

“We inactivated the PKC λ/ι gene in the intestine of mice, which caused them to have very few Paneth cells,” added Diaz-Meco. “Without Paneth cells, the intestine is more susceptible to bacterial infiltration, which leads to inflammation. Since inflammation favors cancer, it makes sense that PKC λ/ι is a tumor suppressor in this setting.”

To find a way to boost Paneth cell numbers and possibly treat IBD, the team looked for what drives the deficit in these protector cells. The key link was overactive EZH2, which turns off genes needed to generate Paneth cells.

“We used an in vitro model—‘mini guts’ in a dish—to show that blocking EZH2 helps return the number of Paneth cells to normal,” said Yuki Nakanishi, M.D., a postdoctoral fellow in the Moscat/ Diaz-Meco lab and lead author of the work. “This demonstrates that inhibiting EZH2 could be a new way to slow the progression of IBD.”

Importantly, the team verified the relevance of their findings in intestinal biopsy samples from 30 patients with Crohn’s disease. Disease progression correlated with lower levels of PKC λ/ι.

“EZH2 inhibitors are currently being developed by the pharmaceutical industry to treat other cancers, so they could be tested for IBD relatively soon,” said Moscat. “But first, we need to do preclinical studies to test whether they block progression of the disease.”