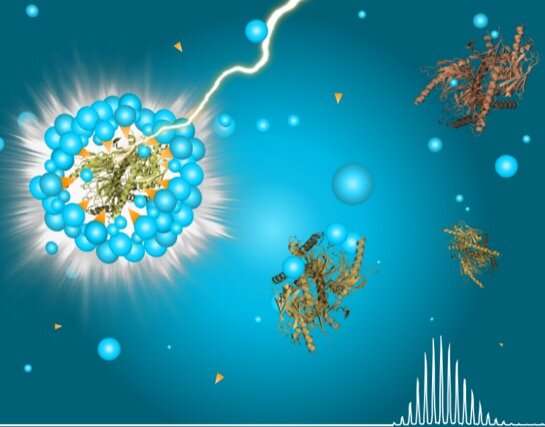 A chemical surfactant or detergent used to help prepare protein samples for analysis by mass spectrometry, is cleaved in this illustration by ultraviolet light. Breaking the molecule eliminates it from samples, leaving only the subject proteins for analysis. Credit: Stanford Mitchell

DNA and the genome, we know, provide the blueprint for life. But it is the proteins made according to the genome's instructions that are the nuts and bolts of living organisms, providing the molecular building blocks for all cells and that are critical targets for therapy.

There are many different kinds of proteins that make up the human body and they are widely studied. But scientists have been hampered by their inability to easily analyze some proteins that are difficult to solubilize in water. This is especially true of proteins that reside in the membranes of cells and which have the most potential as new drug targets.

In a study published today (April 15, 2019) in the journal Nature Methods, a team led by University of Wisconsin-Madison associate professor of cell and regenerative biology and chemistry Ying Ge reports the development of a novel strategy capable of extracting and driving hard-to-reach proteins into water solution where they can be effectively studied using mass spectrometry, a powerful analytical technique. The new approach promises a trove of biological insights and, importantly, may help identify therapeutically relevant proteins and provide new disease diagnostic techniques.

"Approximately one-third of the proteome in living organisms are membrane proteins," explains Ge, who works in the UW School of Medicine and Public Health. "They play important roles in many biological processes and account for about two-thirds of known 'druggable' targets in the cell."

Moreover, as proteins undergo change due to things like aging, disease or even therapy, they can provide clues to the courses of diseases or conditions, providing further insights into changes occurring at the molecular level.

Scientists have developed a variety of methods for studying proteins and technologies such as mass spectrometry have evolved to the point where researchers can measure the molecular weights of protein molecules accurately, revealing details in the protein sequence and modifications that will help the design and discovery of effective new drugs.

To help extract membrane proteins from cells and tissues for analysis, Ge and her colleagues, including lead author Kyle Brown, a UW-Madison graduate student, postdoctoral fellow Tania Guardado, and chemistry Professor Song Jin, designed and screened a large number of chemical compounds and identified one that could be molded into a "photocleavable" surfactant called Azo.

Azo, notes Ge, functions much like conventional surfactants except that a chemical bond that can be broken by simple exposure to ultraviolet light is added to the middle of the surfactant molecule. When the bond is cleaved by exposure to light just prior to undergoing mass spectrometry analysis, Azo breaks apart, leaving only the protein molecules and eliminating the detergent that interferes with the ultrasensitive analysis.

"Azo enables effective mass spectrometry analysis of whole proteins, and opens up new opportunities to study membrane proteins" that were inaccessible previously, says Ge. "This significantly advances the whole protein 'top-down' mass spectrometry, which provides a bird's eye view of many forms of the proteins from the same gene. Such information is essential for understanding biological systems and deciphering disease mechanisms as well as identifying key diagnostic markers and new therapeutic targets."

This is the first time such engineered molecules with photocleavable bonds have been utilized in whole protein analysis. Notably, Azo can be easily synthesized and can be used as a replacement for the most commonly used surfactants.

The Wisconsin Alumni Research Foundation has filed patent applications on the new technology.