To help scientists uncover the secrets of dark matter, architects and engineers with Leo A Daly are heading a mile underground, retrofitting part of an abandoned gold mine into one of the most specialized cleanrooms on earth. This project will test the team’s expertise and knowledge in new ways, while giving them a unique opportunity to contribute to the cutting edge of astrophysical research.

The Sanford Underground Research Facility (SURF) is a sprawling complex of underground labs that occupies the former Homestake gold mine in Lead, S.D. Here, shielded by a mile of rock from the interfering radiation that bomboards the earth, chemist Raymond Davis Jr. performed the first solar neutrino experiments. These experiments, conducted from 1970 to 1994, earned Davis a share of the 2002 Nobel Prize in Physics.

That same cavern—located 4,850 feet underground—is now part of the Davis Campus, and is being adapted to conduct the next generation of dark matter experiments. In an unprecedented collaboration known as LUX-ZEPLIN (LZ), a consortium of 250 scientists and 37 institutions will use the most sensitive detector on earth and 20 percent of the world’s annual production of liquid Xenon to directly detect Weakly Interacting Massive Particles (WIMPs). Scientists believe these hypothetical particles could help explain the nature of dark matter, which comprises about 85 percent of the mass in the universe.

Dark matter is so named because it does not emit or absorb light. However, it leaves clues about its presence via gravity. It can be observed affecting the orbital velocities of galaxies in clusters, and distorting light emitted from background objects in a phenomenon known as gravitational lensing. WIMPs pass through ordinary matter without leaving hardly a trace, but under the right circumstances they may affect observable changes in the nuclei of noble elements such as xenon. 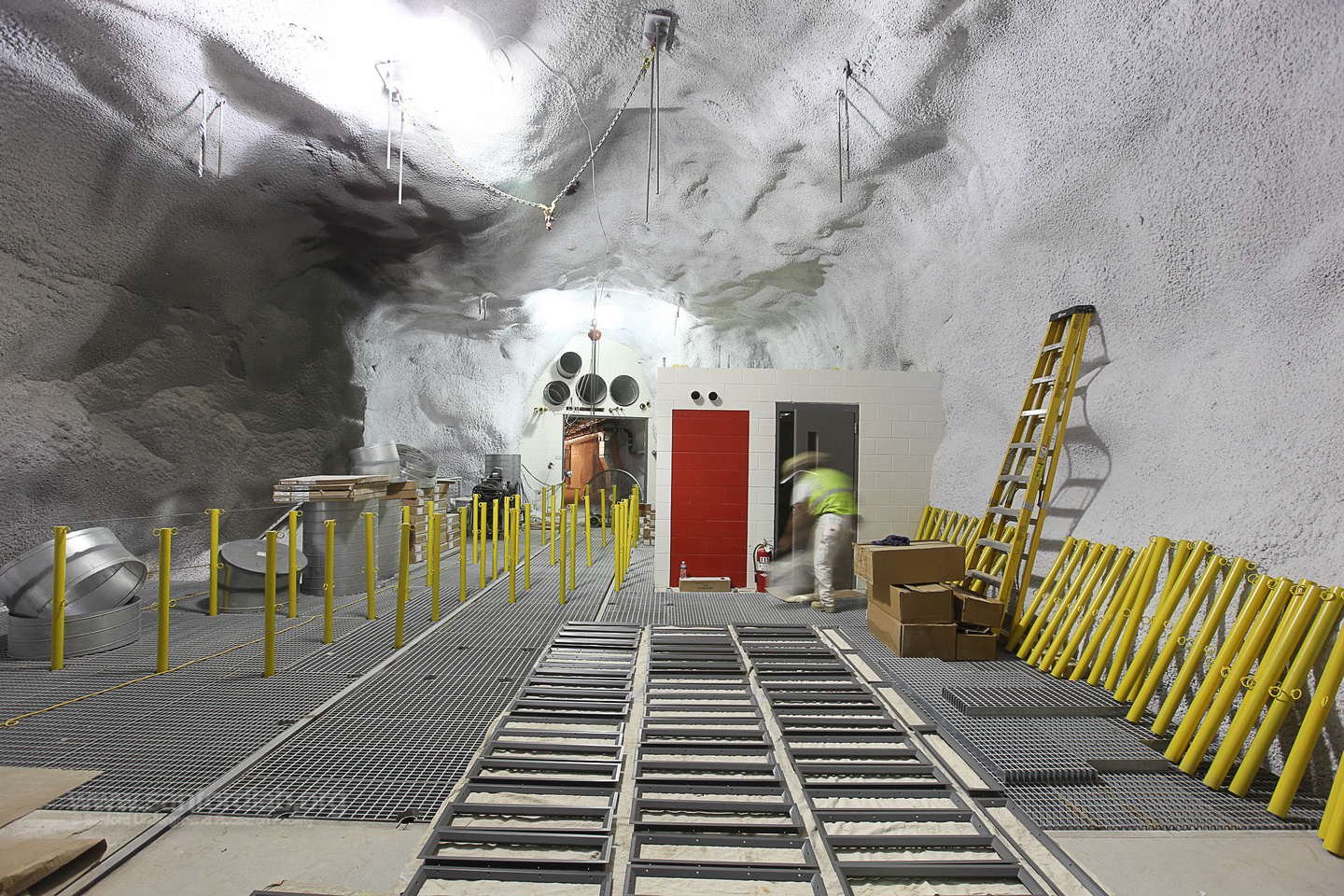 The walls of the Davis Lab are carved out of rock and covered in shotcrete. Image: Matt Kapust, Sanford Underground Research Facility

The most sensitive piece of equipment on Earth

The LZ experiment will take place in a tank full of 10 tons of liquid xenon. Theoretically, as an impinging flux of dark matter particles (WIMPs) pass through the tank, the xenon nuclei will recoil in response to collisions. A recoiling xenon nucleus causes a flash of scintillation light, liberating a charge that causes electroluminescence when extracted from liquid into xenon gas. In the LZ’s Time Projection Chamber (TPC), these flashes of light will be detected by 494 photomultiplier tubes, deployed above and below the liquid xenon. These photomultipliers convert the flashes of light to data so that can be observed by scientists.

To control for unwanted particle signals, the TPC is surrounded by tank of gadolinium-doped scintillator fluid, and housed in another 8-meter by 6-meter-high water shield containing 70,000 gallons of purified water. This will further reduce external background signals to the detector, particularly neutrons and gammas.

A 3-year run of the experiment will achieve a sensitivity close to the fundamental limits from the cosmic neutrino background.

“When completed, the LZ experiment will be the world’s most sensitive experiment for WIMPs over a large range of WIMP masses,” said Harry Nelson, physicist at the University of California, Santa Barbara. 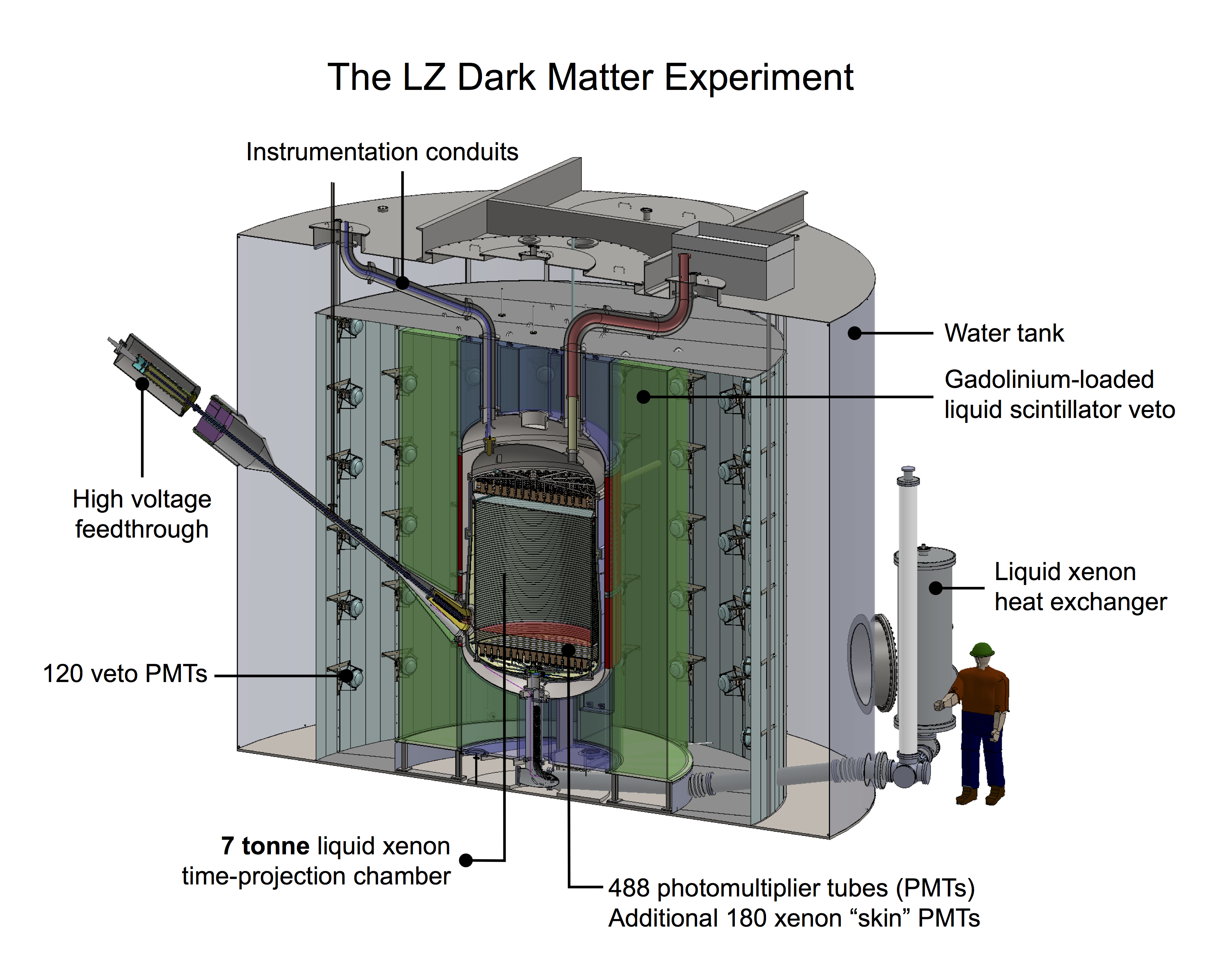 Caring for Earth’s most sensitive equipment

To get the LZ assembled, moved underground and working, Leo A Daly is designing two highly specialized controlled environments—one above ground for the unit’s assembly, and one below ground in the Davis Campus.

Cleanrooms are necessary in astrophysical research because the detectors are so sensitive. Even a tiny amount of dust, airborne microbes, aerosol particles or chemical vapors may alter the results or damage the equipment. A typical cleanroom uses special air handlers equipped with HEPA filters of a certain tolerance, and change the air a certain number of times per hour, depending on the needs of the environment. The cleanrooms used for the LZ experiment are rated as Class 1,000 cleanrooms, meaning there should not be more than 1,000 particles greater than 0.5 microns in size in any given cubic meter of air. The air handler is calibrated to change the room’s air between 150 and 480 times per hour. For comparison, a house has an air exchange rate of 0.5 to 2 air exchanges per hour.

What is unusual about the LZ’s cleanroom is that its design also keeps out radon, a radioactive noble gas that naturally leeches out of the ground. The sensitive nature of the LZ experiment requires an environment free of radon, and required the design team to create an extremely rare radon-elimination system. Working with a specialized cleanroom designer, the team devised a two-step approach to keeping the radon out: 1) All air that is pumped into the cleanroom goes through a radon filtration system before entering the room; 2) The cleanroom’s walls are lined with metal sheeting to reduce radon coming from the walls.

A rendering of the Surface Assembly Laboratory in South Dakota where LZ components will be assembled before they are relocated underground. Image: LZ collaboration

Once the cryostat has been assembled above-ground, the challenge is to coordinate a perfectly timed method of delivering construction materials and the detector, piece by piece, so they can be assembled in the limited space available.

The Davis Campus is accessed via the Yates Shaft, a vertical tunnel that descends vertically from the above-ground headframe to the 4850 level. The 14,000-pound “cage”—a 4.5’ x 12.5’ elevator car—travels through the shaft at about 500 feet-per-second, for a door-to-door travel time of 10 minutes. Anyone entering the underground must wear a utility suit and carry an emergency breathing apparatus, a hard-hat with light and a brass tag which contains a unique number. The brass tag is system, left over from mining days, allows SURF to keep count of the 20 to 50 scientists who work underground on any given day. In an emergency situation they will search for a missing person who has not “tagged out.”

Bringing construction equipment, materials and the cryostat underground requires a well-coordinated process. First, all construction materials have to be palletized and vacuum-packed to maintain their cleanliness. The area underground is damp, windy, and dusty, so no chances are taken in potentially contaminating the materials. Next, each piece of equipment is conveyed underground in a rigid, just-in-time sequence. There is very little room for storage, and no opportunity to “run and grab something” that has been forgotten above ground. 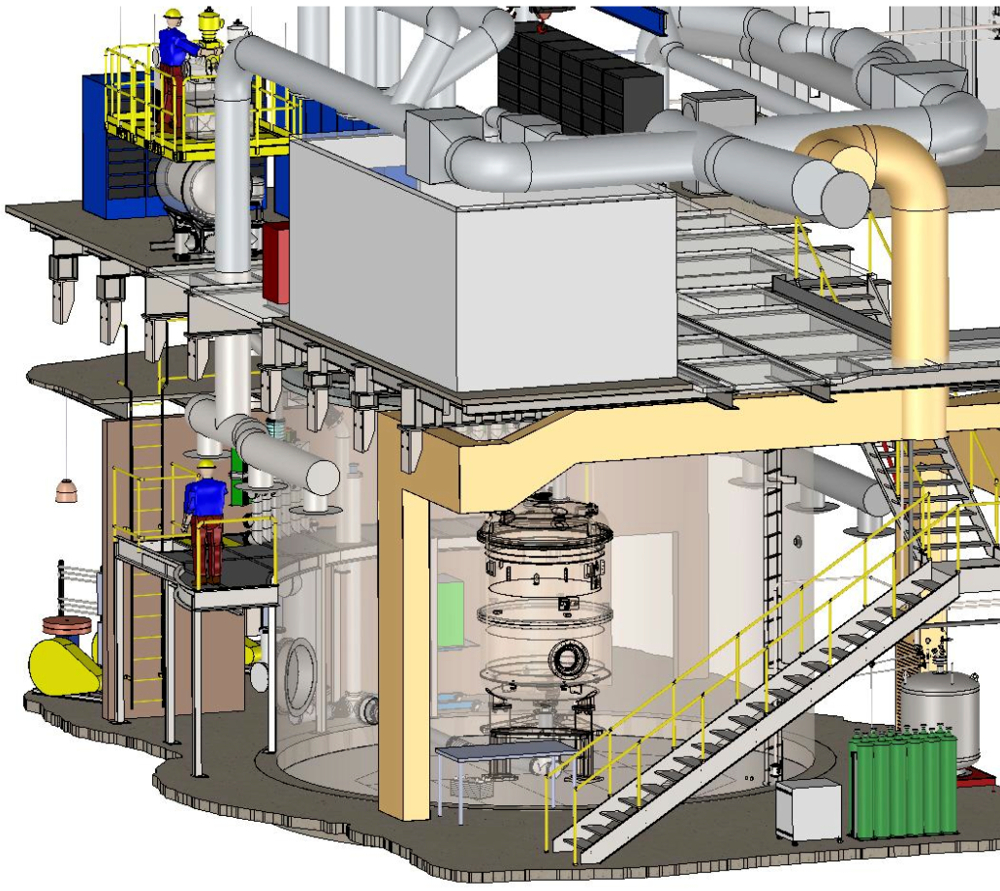 The underground home of LZ and its supporting systems are shown in this computerized rendering. Image: Matt Hoff, Berkeley Lab

Project of a lifetime

Leo A Daly has been lucky enough to work on three projects so far on the SURF campus. Four years ago, working with the University of Notre Dame, the firm designed a space for the Compact Accelerator System Performing Astrophysical Research (CASPAR) experiment. This experiment, which will soon be underway, seeks to understand the processes in stars that produced half of the elements in the universe. Later they were tapped to create an underground cleanroom for Black Hills State University, to perform low background radiation studies.

The LZ project, which is currently in design and expected to be fully operational in 2020, tests all the knowledge and expertise Leo A Daly’s laboratory design team have developed over the other two projects. Once complete, the LZ experiment will take humankind one step closer to understanding the secrets of the universe. As engineers and architects with a keen and constant desire to understand how things work, these are projects of a lifetime.

Steven P. Andersen, AIA, LEED AP, BD+C, is a senior architect with Leo A Daly. He has 20 years of experience working on complex design projects in which complete integration of architectural and engineering systems are critical to the success of the facility. He is particularly versed in higher-education projects, including highly specialized labs, science classrooms and library buildings. www.leoadaly.com