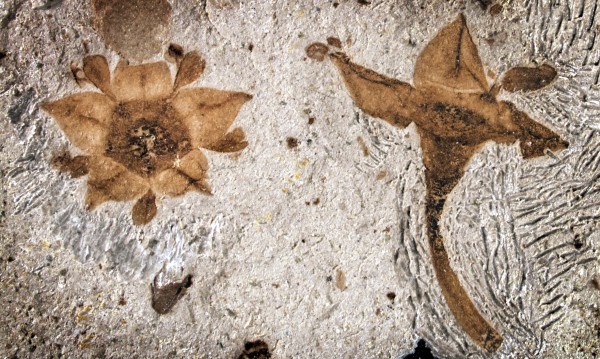 Around 66 million years ago, at the end of the Cretaceous period, a giant asteroid crashed into the present-day Gulf of Mexico, leading to the extinction of the non-avian dinosaurs. How plants were affected is less understood, but fossil records show that ferns were the first plants to recover many thousands of years afterward.

Now, a team including Cornell researchers reports the discovery of the first fossilized flowers from South America, and perhaps the entire Southern Hemisphere, following the extinction event. The fossils date back to the early Paleocene epoch, less than one million years after the asteroid struck. They were discovered in shales of the Salamanca Formation in Chubut Province, Patagonia, Argentina.

The researchers identified the fossilized flowers as belonging to the buckthorn family (Rhamnaceae). Today, the family is found worldwide.

The study was published May 10 in the online journal PLOS One.

“The fossilized flowers provide a new window into the earliest Paleocene communities in South America, and they are giving us the opportunity to compare the response to the extinction event on different continents,” said Nathan Jud, the paper’s first author and a postdoctoral researcher in Maria Gandolfo’s lab, a senior research associate at the L.H. Bailey Hortorium and a co-author of the paper.

The finding also helps resolve an ongoing debate in the field of paleobotany on the origin of the Rhamnaceae plant family. Scientists have argued about whether early buckthorns originated in an ancient supercontinent called Gondwana, which later split and includes most of the Southern Hemisphere landmasses today; or whether the family originated in another supercontinent called Laurasia that accounts for most of today’s Northern Hemisphere landmasses.

Fossils found in Colombia and Southern Mexico offer evidence that plants from the Rhamnaceae family first appeared in the Late Cretaceous epoch shortly before the extinction event, Jud said. Though there was likely some extinction when the asteroid struck, especially near the crater where everything was destroyed by impact-generated wildfires, he added.

One scenario is that Rhamnaceae first appeared in the tropics of Gondwana, but survived the extinction in Patagonia, and then spread from there after the extinction event as plants re-colonized the most affected areas, Jud said.

The Salamanca Formation is among the most precisely-dated sites from that era in the world. The age of the fossils was corroborated by radiometric dating (using radioactive isotopes), the global paleomagnetic sequence (signatures of reversals of Earth’s magnetic field found in the samples), and fossil correlations (age of other fossils).

“These are the only flowers of Danian age [an age that accounts for about 5 million years following the extinction event] for which we have good age control,” said Jud. Researchers have discovered other fossilized flowers in India and China from around the Danian age, but their dates are not as precise, he said.

To determine that the fossilized flowers from Argentina belonged to the Rhamnaceae family, the authors noticed that the organization of the petals and stamens in the fossil is found in Rhamnaceae and a few other families. They found examples of 10 of the 11 living Rhamnaceae tribes in the L.H. Bailey Hortorium Herbarium at Cornell University, which then were compared with morphological features in the fossil flowers to identify them.

Co-authors include Ari Iglesias, a researcher at the Universidad Nacional del Comahue in Argentina, and Peter Wilf, a geoscientist at Pennsylvania State University.

The study was funded by the National Science Foundation and the Fulbright Foundation.