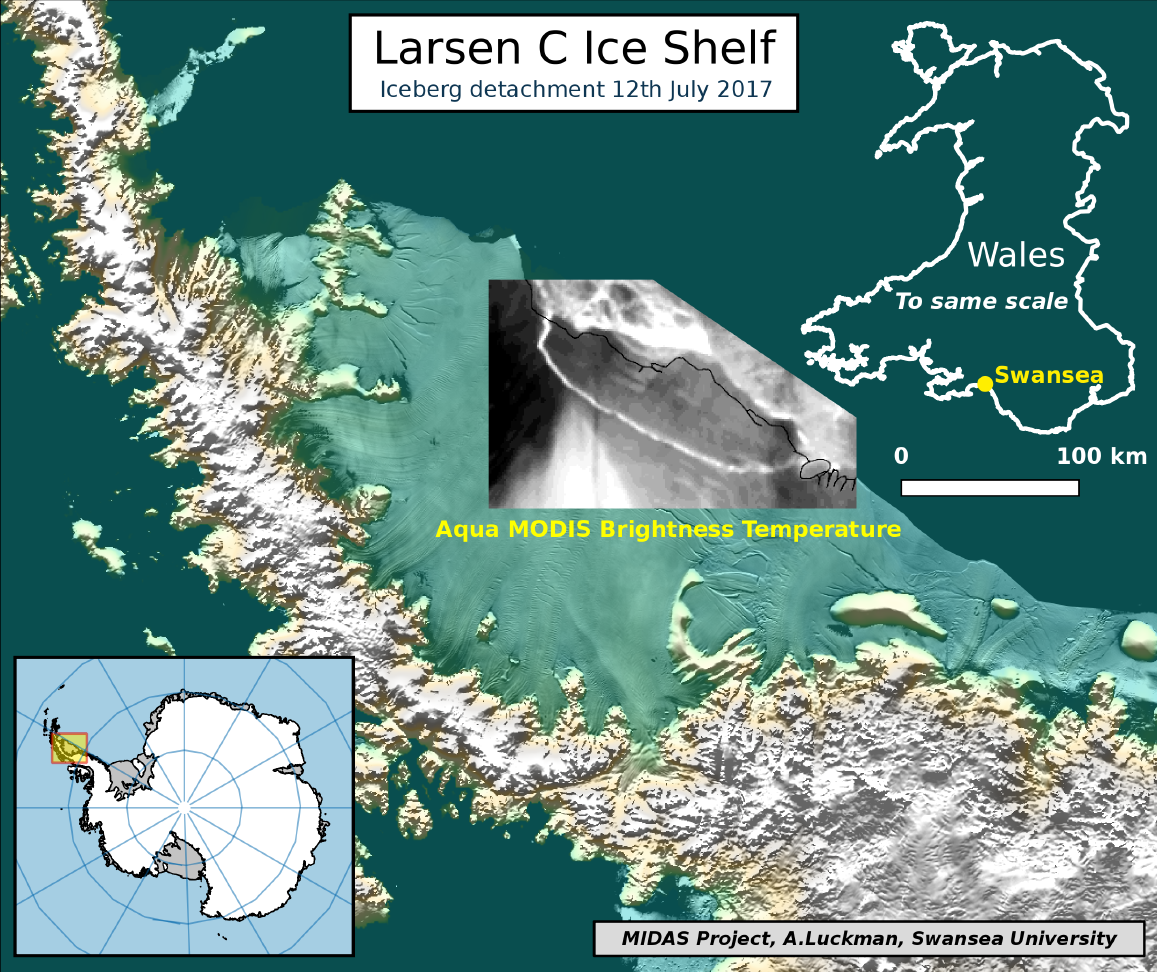 After being on high alert for months, a 5,800 square km, one trillion-ton iceberg has finally broken free of the Larsen C ice shelf.

Researchers from Project MIDAS, a UK-based Antarctic research project, announced on July 12 that the piece, which will likely be named A68 and has a volume twice of Lake Erie, broke off.

“We have been anticipating this event for months, and have been surprised how long it took for the rift to break through the final few kilometers of ice,” professor Adrian Luckman, of Swansea University’s College of Science and head of Project MIDAS, said in a statement. “We will continue to monitor both the impact of this calving event on the Larsen C Ice Shelf, and the fate of this huge iceberg.”

The calving of the iceberg reduced the area of Larsen C by more than 12 percent and while the researchers expect the ice shelf to naturally regrow, the new configuration is potentially less stable than it previously was.

“The iceberg is one of the largest recorded and its future progress is difficult to predict,” Luckman said. “It may remain in one piece but is more likely to break into fragments.

“Some of the ice may remain in the area for decades, while parts of the iceberg may drift north into warmer waters,” he added.

Larsen C is between 200 and 600 meters thick and floats on the ocean at the edge of the Antarctic Peninsula, holding back the flow of glaciers that feed into it.

The researchers observed the breakthrough from data from NASA’s Aqua MODIS satellite instrument, which images in the thermal infrared at a resolution of one km and was confirmed by NASA’s Suomi VIIRS instrument.

Martin O’Leary, Ph.D., a Swansea University glaciologist and member of the MIDAS project team, explained the significance of the rift.

“Although this is a natural event and we’re not aware of any link to human-induced climate change, this puts the ice shelf in a very vulnerable position,” O’Leary said in a statement. “This is the furthest back that the ice front has been in recorded history.

“We’re going to be watching very carefully for signs that the rest of the shelf is becoming unstable,” he added.

According to the researchers, the new iceberg will not immediately raise sea levels but if the shelf loses much more of its area it could result in glaciers that flow off the and behind speeding up their passage towards the ocean and the non-floating ice would have an eventual impact on sea levels at a very modest rate.

The rift was discovered late in 2016 and has been spreading since, with a second branch forming earlier this year.

R&D Magazine covered the last update on the rift in June.