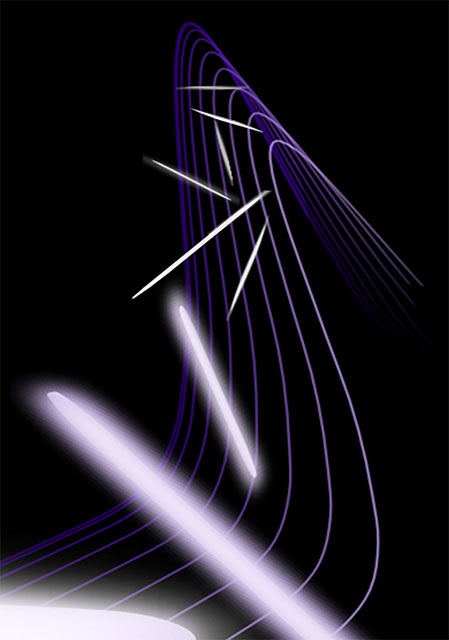 This image is a rendition of a one-dimensional, needle-like nanocrystal, such as the one prepared by Vela in collaboration with scientists Emily Smith and Jacob Petrich. Vela’s team has prepared a family of highly luminescent perovskite nanocrystals with shape correlated emission. Credit: Ames Laboratory

Perovskites are optically active, semiconducting compounds that are known to display intriguing electronic, light-emitting and chemical properties. Over the last few years, lead-halide perovskites have become one of the most promising semiconductors for solar cells due to their low cost, easier processability and high power conversion efficiencies. Photovoltaics made of these materials now reach power conversion efficiencies of more than 20 percent.

Speculating that these enhancements had something to do with the internal structure of mixed-halide perovskites, Vela, who is also an associate professor of chemistry at Iowa State University (ISU), worked with scientists with expertise in solid-state nuclear magnetic resonance (NMR) at both Ames Laboratory and ISU. NMR is an analytical chemistry technique that provides scientists with physical, chemical, structural and electronic information about complex samples.

“Our basic question was what it is about these materials in terms of their chemistry, composition, and structure that can affect their behavior,” said Vela.

Scientists found that depending on how the material is made there can be significant nonstoichiometric impurities or “dopants” permeating the material, which could significantly affect the material’s chemistry, moisture stability and transport properties.

The answers came via the combination of the use of optical absorption spectroscopy, powder X-ray diffraction and for the first time, the advanced probing capabilities of lead solid-state NMR.

“We were only able to see these dopants, along with other semicrystalline impurities, through the use of lead solid-state NMR,” said Vela.

Another major discovery scientists made was that solid state synthesis is far superior to solution-phase synthesis in making mixed-halide perovskites. According to Vela, the advanced spectroscopy and materials capabilities of Ames Laboratory and ISU were critical in understanding how various synthetic procedures affect the true composition, speciation, stability and optoelectronic properties of these materials.

“We found you can make clean mixed halide perovskites without semi-crystalline impurities if you make them in the absence of a solvent,” Vela said.

According to Vela, the significance of their findings is multifold and they are only beginning to grasp the implications of those findings.

“One obvious implication is that our understanding of the amazing opto-electronic properties of these semiconductors was incomplete,” said Vela. “We’re dealing with a compound that is not inherently as simple as people thought.”

The research is further discussed in a paper, “Persistent Dopants and Phase Segregation in Organolead Mixed-Halide Perovskites,” authored by Vela, Bryan A. Rosales, Long Men, Sarah D. Cady, Michael P. Hanrahan, and Aaron J. Rossini; and published online in Chemistry Materials. The work was supported by DOE’s Office of Science.