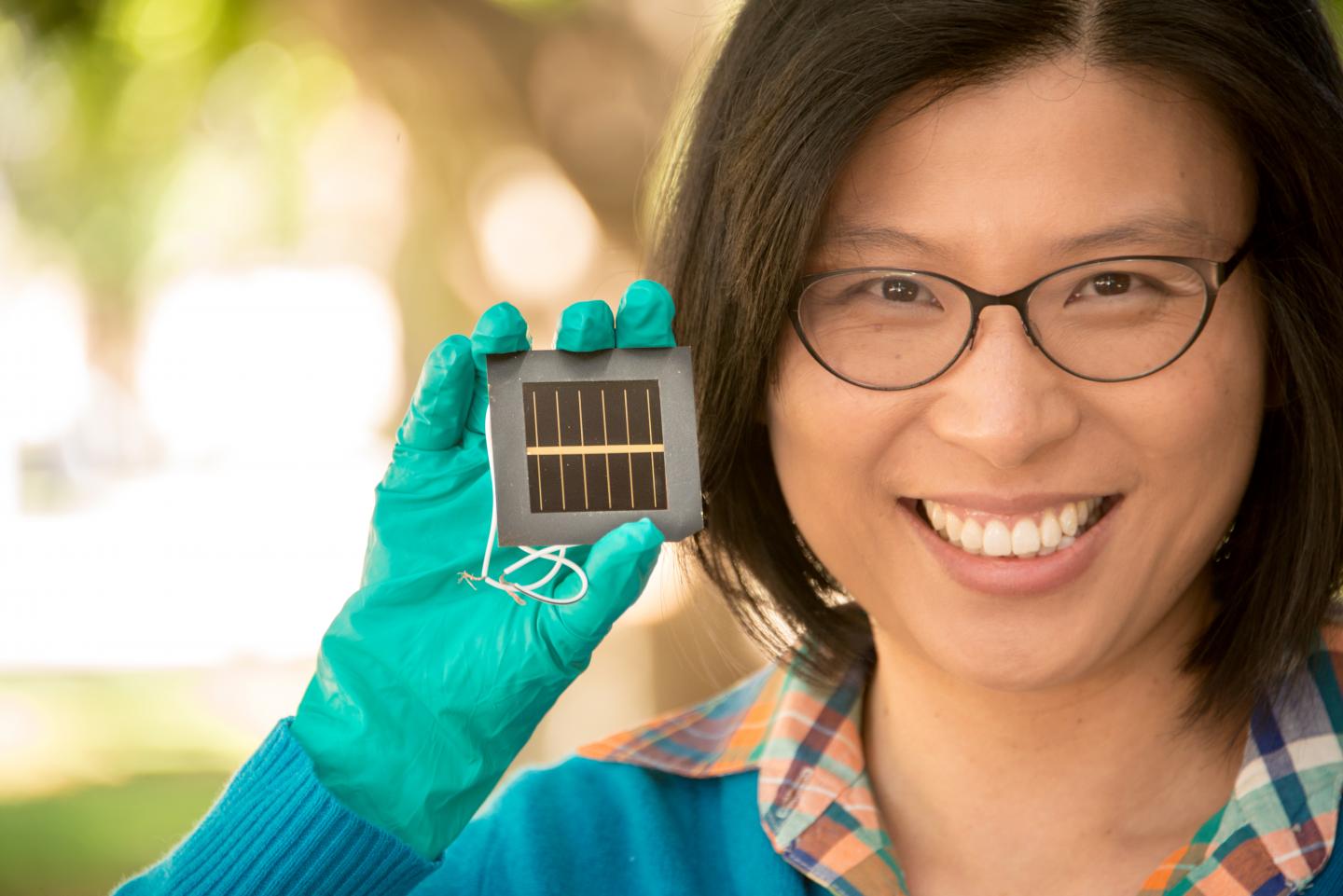 They're flexible, cheap to produce and simple to make - which is why perovskites are the hottest new material in solar cell design. And now, engineers at Australia's University of New South Wales in Sydney have smashed the trendy new compound's world efficiency record.

Speaking at the Asia-Pacific Solar Research Conference in Canberra on Friday 2 December, Anita Ho-Baillie, a Senior Research Fellow at the Australian Centre for Advanced Photovoltaics (ACAP), announced that her team at UNSW has achieved the highest efficiency rating with the largest perovskite solar cells to date.

Her team has also achieved an 18% efficiency rating on a 1.2 cm2 single perovskite cell, and an 11.5% for a 16 cm2 four-cell perovskite mini-module, both independently certified by Newport.

"This is a very hot area of research, with many teams competing to advance photovoltaic design," said Ho-Baillie. "Perovskites came out of nowhere in 2009, with an efficiency rating of 3.8%, and have since grown in leaps and bounds. These results place UNSW amongst the best groups in the world producing state-of-the-art high-performance perovskite solar cells. And I think we can get to 24% within a year or so."

Perovskite is a structured compound, where a hybrid organic-inorganic lead or tin halide-based material acts as the light-harvesting active layer. They are the fastest-advancing solar technology to date, and are attractive because the compound is cheap to produce and simple to manufacture, and can even be sprayed onto surfaces.

"The versatility of solution deposition of perovskite makes it possible to spray-coat, print or paint on solar cells," said Ho-Baillie. "The diversity of chemical compositions also allows cells be transparent, or made of different colours. Imagine being able to cover every surface of buildings, devices and cars with solar cells."

Most of the world's commercial solar cells are made from a refined, highly purified silicon crystal and, like the most efficient commercial silicon cells (known as PERC cells and invented at UNSW), need to be baked above 800?C in multiple high-temperature steps. Perovskites, on the other hand, are made at low temperatures and 200 times thinner than silicon cells.

But although perovskites hold much promise for cost-effective solar energy, they are currently prone to fluctuating temperatures and moisture, making them last only a few months without protection. Along with every other team in the world, Ho-Baillie's is trying to extend its durability. Thanks to what engineers learned from more than 40 years of work with layered silicon, they're are confident they can extend this.

Nevertheless, there are many existing applications where even disposable low-cost, high-efficiency solar cells could be attractive, such as use in disaster response, device charging and lighting in electricity-poor regions of the world. Perovskite solar cells also have the highest power to weight ratio amongst viable photovoltaic technologies.

"We will capitalise on the advantages of perovskites and continue to tackle issues important for commercialisation, like scaling to larger areas and improving cell durability," said Martin Green, Director of the ACAP and Ho-Baillie's mentor. The project's goal is to lift perovskite solar cell efficiency to 26%.

The research is part of a collaboration backed by $3.6 million in funding through the Australian Renewable Energy Agency's (ARENA) 'solar excellence' initiative. ARENA's CEO Ivor Frischknecht said the achievement demonstrated the importance of supporting early stage renewable energy technologies: "In the future, this world-leading R&D could deliver efficiency wins for households and businesses through rooftop solar as well as for big solar projects like those being advanced through ARENA's investment in large-scale solar."

To make a perovskite solar cells, engineers grow crystals into a structure known as 'perovskite', named after Lev Perovski, the Russian mineralogist who discovered it. They first dissolve a selection of compounds in a liquid to make the 'ink', then deposit this on a specialised glass which can conduct electricity. When the ink dries, it leaves behind a thin film that crystallises on top of the glass when mild heat is applied, resulting in a thin layer of perovskite crystals.

The tricky part is growing a thin film of perovskite crystals so the resulting solar cell absorbs a maximum amount of light. Worldwide, engineers are working to create smooth and regular layers of perovskite with large crystal grain sizes in order to increase photovoltaic yields.

Ho-Baillie, who obtained her PhD at UNSW in 2004, is a former chief engineer for Solar Sailor, an Australian company which integrates solar cells into purpose-designed commercial marine ferries which currently ply waterways in Sydney, Shanghai and Hong Kong.