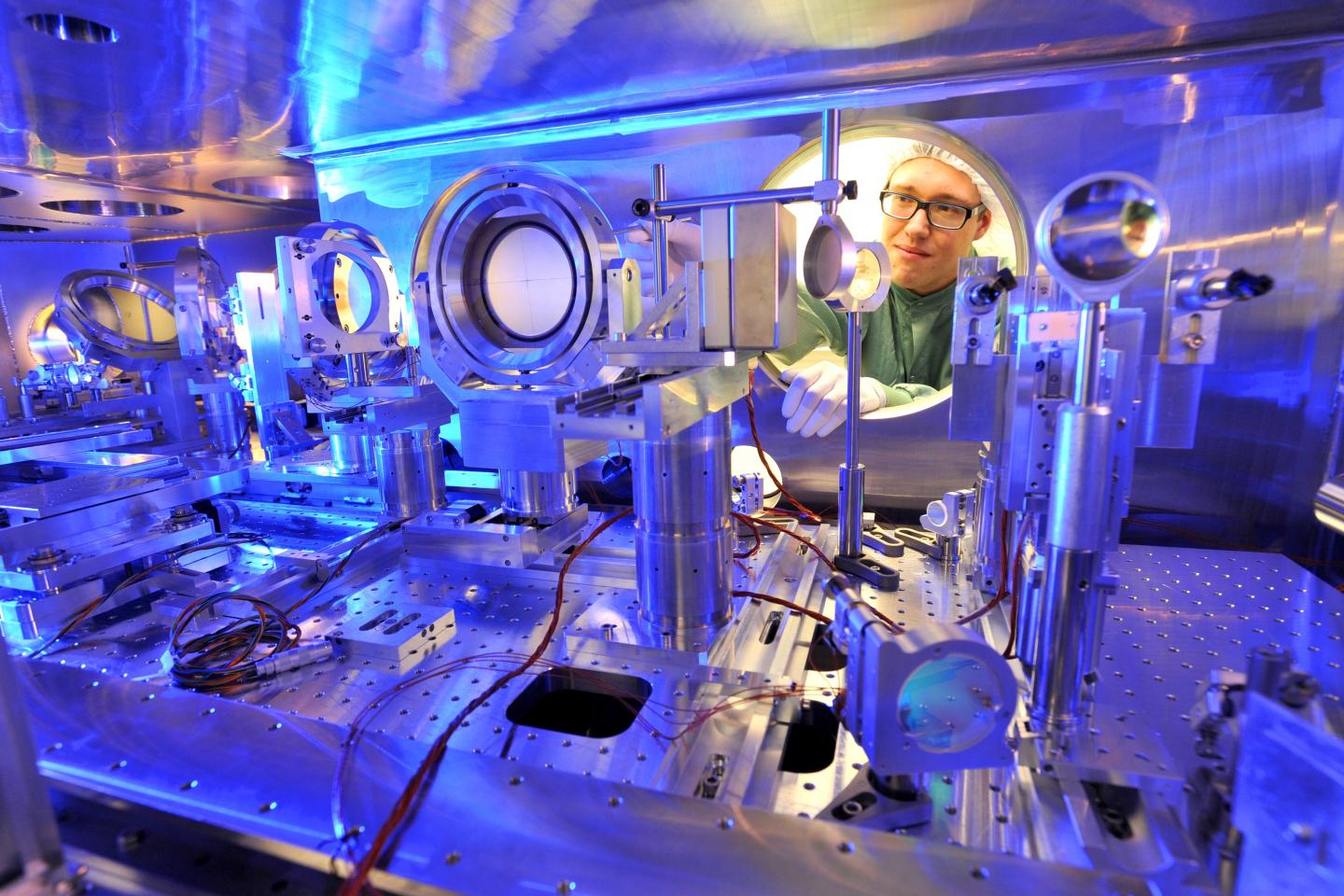 In a so-called target chamber, the light pulse of the high-performance laser DRACO hits a gas-jet. The aim is to accelerate electrons to almost the speed of light on a distance shorter than a pencil’s width.

Conventional electron accelerators have become an indispensable tool in modern research. The extremely bright radiation generated by synchrotrons, or free electron lasers, provides us with unique insights into matter at the atomic level. But even the smallest versions of these super microscopes are the size of a soccer field. Laser plasma acceleration could offer an alternative: with a much smaller footprint and much higher peak currents it could be the basis for the next generation of compact light sources. So far, the challenge with laser accelerators has been to create a reliable and stable electron beam, which is the prerequisite for possible applications. Physicists at the Helmholtz-Zentrum Dresden-Rossendorf (HZDR) have now developed a method to increase both beam stability and quality.

The basic principle of laser acceleration seems quite simple: A bundled, ultra-strong laser beam hits a trace of gas, which instantly creates plasma – an ionized state of matter or, in other words, a whirling mix of charged particles. The power of the light pulse pushes electrons away from their parent ions, creating a sort of bubble-like structure with a strong electric field in the plasma. This field, which the laser pulse drags behind itself like a stern wave, traps the electrons, accelerating them to nearly the speed of light. “These speedy particles allow us to generate x-rays,” Dr. Arie Irman from the HZDR Institute of Radiation Physics explains the purpose of the procedure. “For instance, when we make these electron bundles collide with another laser beam, the impact generates bright, ultra-short x-ray flashes – an immensely valuable research tool for examining extreme states of matter.”

The strength of the secondary radiation greatly depends on the particles’ electrical current. The current, in turn, is mostly determined by the number of electrons fed into the process. Laser-powered acceleration therefore holds great potential, because it reaches significantly higher peak currents in comparison with the conventional method. However, as physicist Jurjen Pieter Couperus points out, the so-called beam loading effect kicks in: “These higher currents create an electric self-field strong enough to superimpose and disturb the laser-driven wave, distorting thereby the beam. The bundle is stretched out and not accelerated properly. The electrons therefore have different energies and quality levels.” But in order to use them as a tool for other experiments, each beam must have the same parameters. “The electrons have to be in the right place at the right time,” summarizes Couperus, who is a Ph.D. candidate in Irman’s team.

Together with other colleagues at the HZDR, the two researchers were the first to demonstrate how the beam loading effect can be exploited for improved beam quality. They add a bit of nitrogen to the helium at which the laser beam is usually directed. “We can control the number of electrons we feed into the process by changing the concentration of the nitrogen,” Irman explains. “In our experiments, we found out that conditions are ideal at a charge of about 300 picocoulomb. Any deviation from it – if we add more or fewer electrons to the wave – results in a broader spread of energy, which impairs beam quality.”

As the physicists’ calculations have shown, experiments under ideal conditions yield peak currents of about 50 kiloamperes. “To put this in context, only about 0.6 kiloamperes flow through the standard overhead line for a German high-speed train,” Jurjen Pieter Couperus explains. He is confident that they can beat their own record: “Using our findings and a laser pulse in the petawatt range, which our high-intensity laser DRACO can achieve, we should be able to generate a high-quality electron beam with peak currents of 150 kiloamperes. That would exceed modern large-scale research accelerators by about two orders of magnitude.” An achievement which the researchers from Dresden believe would pave the way for the next generation of compact radiation sources.