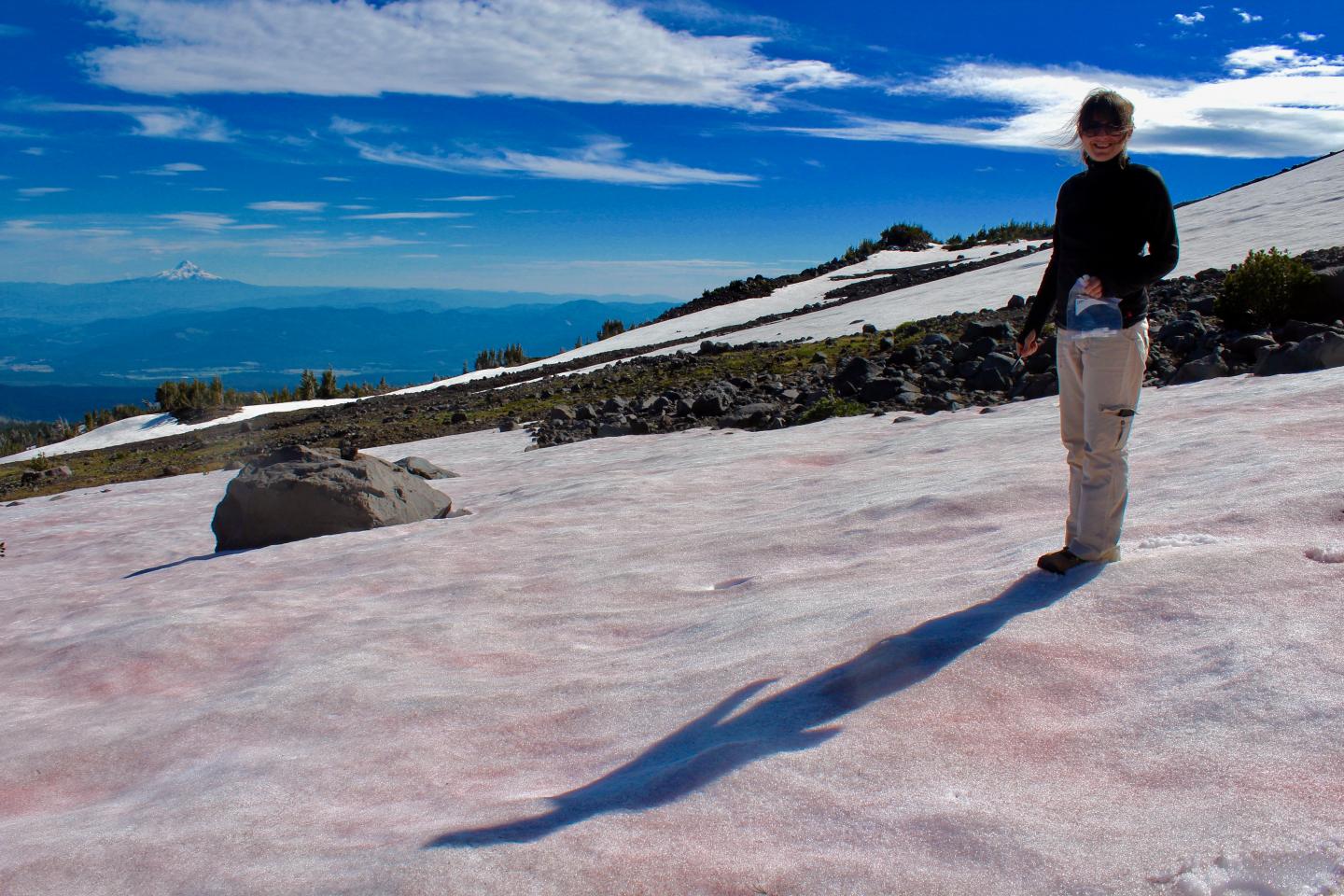 It may look pretty, but the swaths of delicately-colored, pretty "precipitation" may lead to an increase in glacial melting, according to interdisciplinary research at the University of Cincinnati.

Pink snow, or "watermelon snow" as it is sometimes called is actually algae that grow on top of snow and ice in the spring and summer, especially on large glaciers and in high altitude alpine regions that can maintain snow year-round.

Scientists report that during the winter months snow algae become dormant while covered with snow, but in the spring when the snow melts slightly on the surface, the algae thrive again, acquiring nutrients from the environment.

Prior studies on the growth of snow algae have focused on glacial snow in only a few polar regions and a handful of glaciers, but recent UC research published in the journal Geobiology report the first-ever study of snow algae growth on volcanic terrains in the Pacific Northwest.

Concentrating on the Cascade Mountain volcanic chain along the continental shorelines ringing the Pacific -- part of what is known as the Pacific Ring of Fire -- the research team began their expedition on three volcanic glaciers near Mount St. Helens in Washington.

While the study's authors, microbiologist Trinity Hamilton and geobiologist Jeff Havig from the University of Cincinnati, bring their own unique expertise and perspectives to this study, their goals are completely aligned for this ongoing research.

Hamilton, UC assistant professor of biology explains, "We know that snow algae convert carbon dioxide from the atmosphere into biomass (more cells) similar to what phytoplankton in the ocean do. Marine microbes play a significant role in Earth's carbon cycle and we would like to know if and how much snow algae contribute to this process.

"We are also interested in how snow algae buried deep in frozen glaciers eventually affects the downstream ecosystems as glaciers melt and retreat," she adds.

Describing the rosy pigment as a natural protective sunscreen, the researchers say there is also a downside to the algae's colorful hue -- it tends to lower the snow's albedo, or in other words the snow surface's ability to reflect sunlight. Instead, the pink patches absorb heat from the sun leading to a rise in surface melting, which they say can result in an increase in algal growth.

The study, supported by a grant from the University of Cincinnati LEAF Program, also notes that atmospheric sources of ammonia and nitrate, similar to the nitrate and ammonium found in fertilizers, is important for the growth and survival of these algae and can fluctuate depending on nearby industry, livestock farms or trees and plant growth.

"The snow algae need nitrogen as well, and some of our preliminary results indicate that these algal communities are getting their nitrogen primarily from an anthropogenically [human] generated source like combustion engines," says Havig, UC adjunct professor of geology. "A rich supply of nitrogen can also come from regional dairy farms where there are large lagoons of cow manure that generate a lot of ammonia from the breakdown.

"We can track the snow algae's chemical signatures, and it looks indeed like a large source of their nitrogen might be coming from those sorts of man-made sources rather than from a biological pathway."

As Hamilton and Havig considered other lifeforms on the snow's surface they found that snow algae are interacting with bacteria and other microorganisms and are taking up nutrients from the local bedrock that get blown onto the surface. At the core, the study shows the snow algae using these carbon, nitrogen and other nutrient sources, turning it all into more organic material and ultimately new algal cells.

"As we look closer we find that the growth of snow algae and other organic lifeforms on the surface could also be a likely source of the carbon, nitrogen, iron, manganese and phosphorus found in river and stream runoff after glacial retreat and melting," adds Hamilton.

The researchers are quick to note that collecting these colorful specimens was not an easy jaunt. On the contrary, Havig, Hamilton and a few field assistants climbed to elevations of up to 9,000 feet, much of it on foot, while sporting 50-pound backpacks filled with camping gear, scientific equipment, food and safety equipment for traversing glaciers.

The team gathered samples from Collier Glacier on North Sister and Eliot Glacier on Mount Hood in Oregon and Gotchen Glacier on Mount Adams in Washington after completing the 5- to 10-mile round-trip excursions last summer.

"We ended up camping on the glaciers so we could spend more time there but it also meant a lot more weight in the pack," says Havig. "By packing dry ice we were able to keep some samples frozen until we reached a lab. We were also able to perform other analysis right on the spot."

As the researchers explored the occasional variances in pigment colors they found snow algae occasionally appearing in colors of orange, brown, purple and green, explaining those as different species of algae using different wavelengths of light to harvest energy from sunlight and to protect themselves from UV radiation.

While earlier explorers have observed the colorful algae for centuries, it is only recently that scientists like Hamilton and Havig have begun investigating its growth patterns and effects from climate change.

"We ultimately hope to secure additional funding so we can continue our research on other Pacific Rim stratovolcanoes," says Havig.

Hamilton and Havig's research paper titled "Primary productivity of snow algae communities on Stratovolcanoes of the Pacific Northwest," was recently published in the journal Geobiology. Hamilton presented on the same material and title at the December 2016 American Geophysical Union Conference in San Francisco.