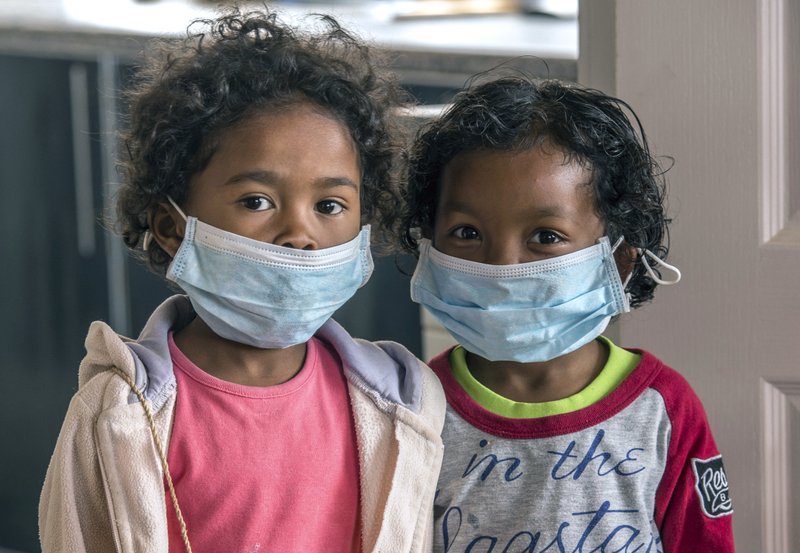 In this Tuesday, Oct. 3, 2017 file photo, children wear face masks at a school in Antananarivo, Madagascar. With dozens dead from a plague outbreak, the International Federation of Red Cross and Red Cresent Societies said Friday, Oct. 13, 2017, that it is deploying its first-ever plague treatment center to the island nation. (AP Photo/Alexander Joe)

With dozens dead from a plague outbreak in Madagascar, the International Federation of Red Cross and Red Crescent Societies said Friday it is deploying its first-ever plague treatment center to the island nation.

The World Health Organization said 561 cases have been reported so far, with another in the Seychelles.

“The situation, as you know, is quite concerning. We’ve seen a doubling of cases over the last week,” Dr. Julie Hall, the Red Cross federation’s director of health and care, told reporters in Geneva.

Red Cross officials have said the situation is particularly worrying because pneumonic plague, which is spread from person to person, has occurred for the first time in non-endemic areas and crowded cities. About 70 percent of the cases are the pneumonic form.

The rise in cases is due in part to a stronger reporting system, and not all cases have been confirmed, Hall said. But she expressed concern about the geographic expansion of the outbreak and said more than 1,000 volunteers are going door-to-door in Madagascar explaining that plague can be treated if antibiotics are quickly used.

“I think all the lessons learned from Ebola mean that our response needs to be extremely fast in these types of situations, in order to bring an outbreak under control as quickly as possible,” she said.

The Red Cross federation’s statement said its plague treatment center will include 50 beds and a medical team with the capacity to isolate patients and will “significantly bolster” outbreak response.

Fears are growing that the outbreak will spread to other countries. Authorities in Seychelles this week said a man was diagnosed with pneumonic plague after returning from Madagascar.

The outbreak began after the death of a 31-year-old man in Madagascar’s central highlands in late August.