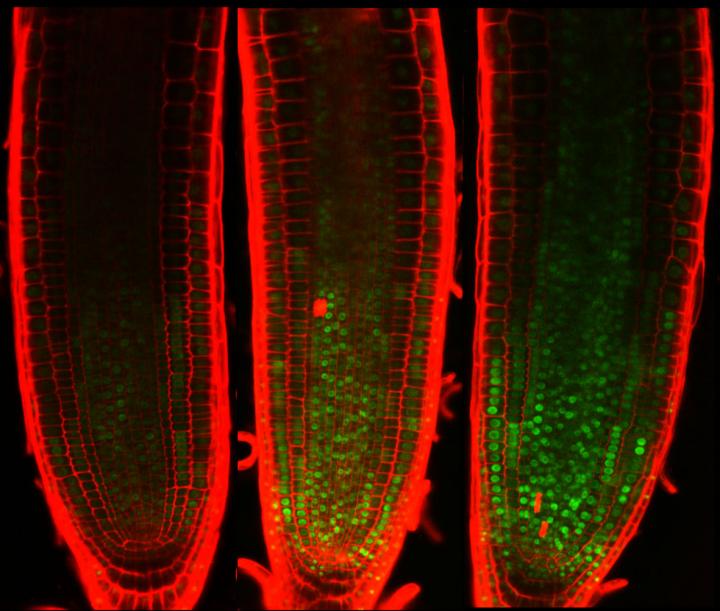 The cell cycle is the system through which a cell grows and divides. It is also how a cell passes its DNA to its progeny and is why the cell cycle ceases if the DNA is damaged, as otherwise it risks passing this damage to daughter cells. Scientists at the Nara Institute of Science and Technology (NAIST) have reported a new molecular mechanism that explains how this cessation occurs. The study, which can be read in Nature Communications, shows the transcription factor family MYB3R prevents progression to the division stage (M phase) of the cell cycle in Arabidopsis, a small flowering plant that is a member of the mustard family.

“Inhibition of cell division in response to DNA damage enables cells to maintain genome integrity. The inhibition is regulated by different molecules in animals and plants,” explains NAIST Professor Masaaki Umeda, who studies the role of stem cells in plant growth.

MYB3R can be divided into groups of transcription activators (Act-MYB) and transcription repressors (Rep-MYB). Plants grow through their root tip and shoot apex, but not upon DNA damage. In the study, Prof. Umeda and his colleagues found termination of the growth was accompanied by an accumulation of Rep-MYB proteins in these regions and that absent this accumulation, the plants would show signs of growing leaves and flowers.

To understand how this accumulation occurs in response to DNA damage, the scientists considered the role of CDK, or cyclin-dependent kinases. CDKs are crucial for the regulation of the cell cycle. DNA damage suppresses CDK activity, which prevents progression to M phase. Prof. Umeda found that inhibiting CDKs even with the absence of DNA damage would cause the Rep-MYB3R accumulation seen with DNA damage and stall the cell cycle before the M phase transition. “We found that CDK activity is required for Rep-MYB degradation under normal conditions. The degradation is suppressed due to DNA damage,” he said.

The study further found that the accumulated Rep-MYB proteins target genes responsible for transitioning the cell to M phase. “Rep-MYB has a number of G2/M-specific target genes. We found that they stop plant growth by targeting only a specific set of these genes,” notes Prof. Umeda.

Why only a specific set and not all its target genes is unclear, though Prof. Umeda suggests that this finding could be evidence that a cofactor that interacts with Rep-MYB may determine the selectivity. Prof. Umeda says that the study provides a new paradigm for how plant cell division ceases upon DNA damage, thus preventing damaged cells from accumulating under stressful conditions. “Without DNA damage, CDK prevents Rep-MYB from activating, which allows the cell cycle to progress to cell division. DNA damage inhibits CDK activity, freeing Rep-MYB and stopping the cell division,” he says.