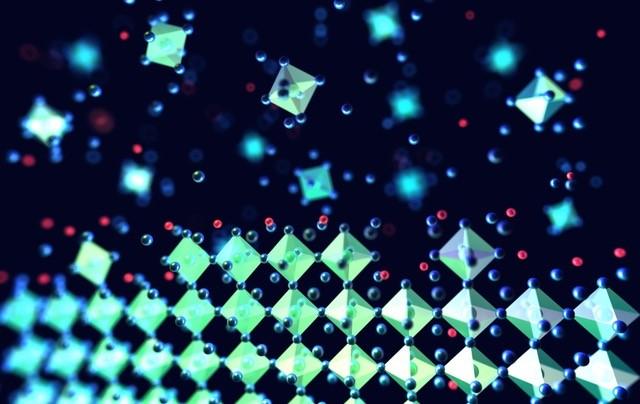 Atomic scale view of the perovskite crystal structure forming (‘self-assembling’). The potassium ions (in red) are decorating the surfaces of the structures to heal defects and immobilising the excess halides.

Potassium could be the key to taking solar cells to the next level of efficiency.

An international team of researchers, including scientists from the University of Cambridge, has discovered that potassium iodide added to solar cells could heal the defects and immobilize ion movement, two problems currently plaguing solar cells.

However, perovskites come with limitations that have hampered their efficiency and consistency, including tiny defects in the crystalline structure called traps that can cause electrons to get stuck before their energy can be harnessed. The easier electrons move around in the solar cell material, the more efficient the material will be at converting photons into electricity.

The ions can also move around in the solar cell when illuminating, causing a change in the color of light the material absorbs called the bandgap.

“So far, we haven’t been able to make these materials stable with the bandgap we need, so we’ve been trying to immobilize the ion movement by tweaking the chemical composition of the perovskite layers,” Sam Stranks, PhD, from Cambridge’s Cavendish Laboratory, who led the research, said in a statement. “This would enable perovskites to be used as versatile solar cells or as colored LEDs, which are essentially solar cells run in reverse.”

The team altered the chemical composition of the perovskite layers by adding potassium iodide to perovskite inks, which then self-assembled into thin films.  The potassium iodide formed a layer above the perovskite that healed the traps, so the electrons could move more freely, while also immobilizing the ion movement to make the material more stable at the desired bandgap.

The researchers demonstrated promising performance with the perovskite bandgaps, ideal for layering on top of a silicon solar cell or with another perovskite layer, called tandem solar cells. Adding a perovskite layer, enables light to be more efficiently harvested from a wider range of the solar spectrum.

During stability testing, the perovskite and potassium devices were 21.5 percent efficient at converting light into electricity, similar to the best perovskite-based solar cells and not far below the practical efficiency limit of silicon-based solar cells, which is 29 percent.

“The high luminescence yields are achieved while maintaining high mobilities of more than 40 square centimeters per volt per second, providing the elusive combination of both high luminescence and excellent charge transport,” the study states. When interfaced with electrodes in a solar cell device stack, the external luminescence yield—a quantity that must be maximized to obtain high efficiency—remains as high as 15 percent, indicating very clean interfaces.”