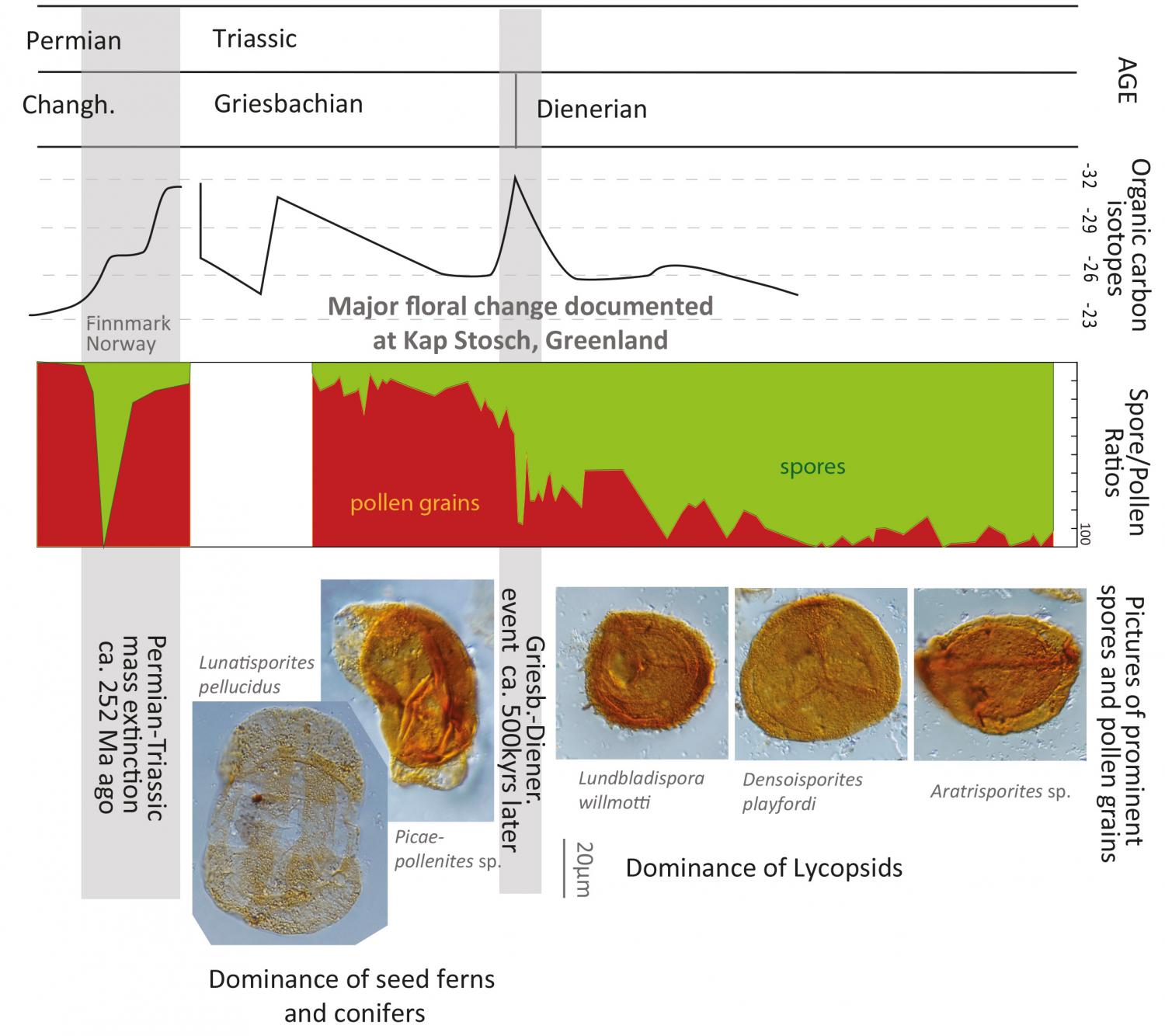 Approximately 500,000 years after the major natural disaster at the boundary between the Permian and the Triassic another event altered the vegetation fundamentally and for longer. (Credit: UZH)

There have been several mass extinctions in the history of the earth with adverse consequences for the environment. Researchers from the University of Zurich have now uncovered another disaster that took place around 250 million years ago and completely changed the prevalent vegetation during the Lower Triassic.

There have been several mass extinctions in the history of the earth. One of the largest known disasters occurred around 252 million years ago at the boundary between the Permian and the Triassic. Almost all sea-dwelling species and two thirds of all reptiles and amphibians died out. Although there were also brief declines in diversity in the plant world, they recovered in the space of a few thousand years, which meant that similar conditions to before prevailed again.

Change in flora within a millennia
Researchers from the Institute and Museum of Paleontology at the University of Zurich have now discovered another previously unknown ecological crisis on a similar scale in the Lower Triassic. The team headed by Peter A. Hochuli and Hugo Bucher revealed that another event altered the vegetation fundamentally and for longer approximately 500,000 years after the major natural disaster at the boundary between the Permian and the Triassic.
The scientists studied sediments towering over 400 meters high from North-Eastern Greenland. Carbon isotope curves suggest that the prevalent seed ferns and conifers were replaced by spore plants in the space of a few millennia. To this day, certain spore plants like ferns are still famous for their ability to survive hostile conditions better than more highly developed plants.

Catastrophic ecological upheaval changes plant world
Until now, it was assumed that the environment gradually recovered during the Lower Triassic 252.4 to 247.8 million years ago. “The drastic, simultaneous changes in flora and the composition of the carbon isotopes indicate that the actual upheaval in the vegetation didn’t take place until the Lower Triassic, i.e. around 500,000 years later than previously assumed,” explains Hochuli.

The researchers didn’t just observe the mass death of vegetation in Greenland; they already discovered the first indications of this floral shift a few years ago in sediment samples from Pakistan. Moreover, the latest datings of volcanic ash by Australian scientists show that the most significant change in the plant world did not happen until a few millennia after the Permian/Triassic boundary. During this period, the indigenous glossopteris seed plant group died out, an event that had previously been dated back to the Permian. Thanks to these findings, the sediment sequences of the supercontinent Gondwana in the southern hemisphere now need to be reinterpreted.

Crisis probably triggered by volcanic eruptions
What caused this newly described natural disaster remains unclear. “However, we see a link between this previously unknown global event and the enormous volcanic eruptions we know from the Lower Triassic in what’s now Siberia,” explains Bucher, Director of UZH’s Institute and Museum of Paleontology.