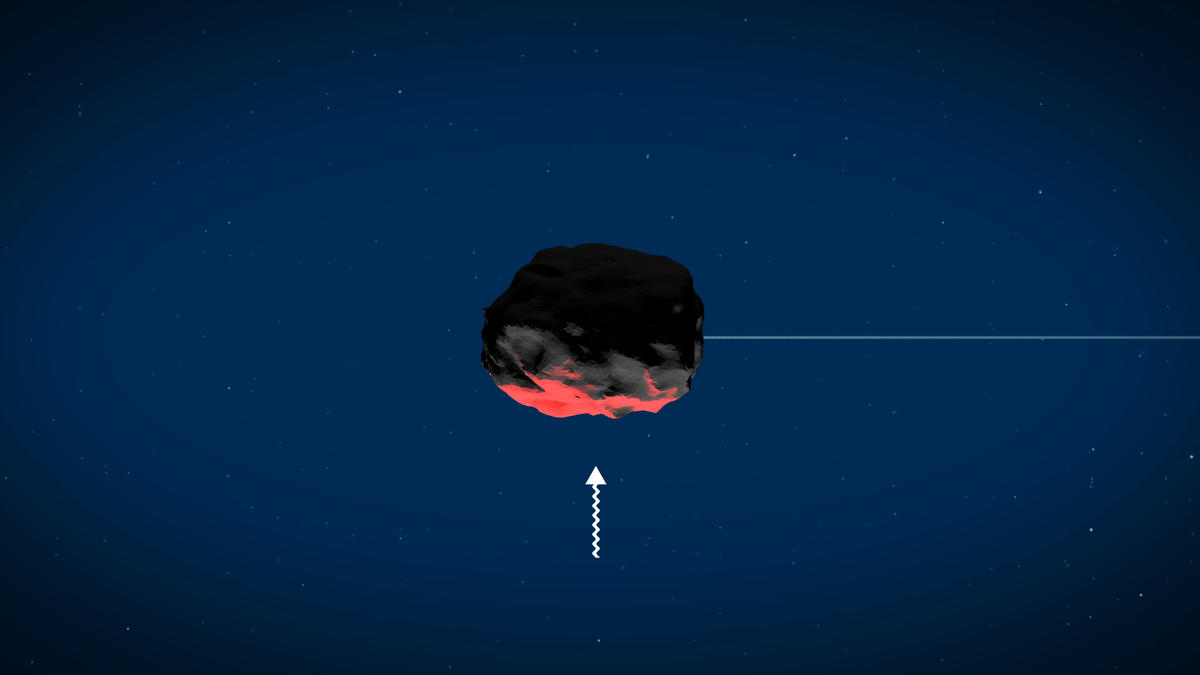 Astronomers have identified the oldest asteroid families and, by process of elimination, the oldest intact asteroids in the main belt. A team including SwRI scientists developed a technique to identify ancient asteroid families that have drifted apart. Asteroid surfaces heat up during the day (as illustrated by this image) and cool down at night, giving off radiation that can act as a sort of mini-thruster. This force can cause asteroids to drift widely over time, making it difficult to identify families of fragments leftover after asteroid collisions eons ago. Credit: NASA/GSFC

Scientists have found asteroid relics from early in the solar system in a sparsely populated region of the main asteroid belt.

Researchers from the Southwest Research Institute (SwRI) used a new search technique to find fragments of catastrophic collisions between larger asteroids eons ago, a discovery that could lead to a better understanding of the history of main belt asteroids.

“By identifying all the families in the main belt, we can figure out which asteroids have been formed by collisions and which might be some of the original members of the asteroid belt,” SwRI Astronomer Kevin Walsh, a coauthor of the study, said in a statement. “We identified all known families and their members and discovered a gigantic void in the main belt, populated by only a handful of asteroids.

“These relics must be part of the original asteroid belt,” he added. “That is the real prize, to know what the main belt looked like just after it formed.”

It is difficult to identify the oldest asteroid families—dating back billions of years ago—because over time an asteroid family spreads out. Asteroids surfaces heat up during the day and cool down at night as they rotate in orbit around the Sun.

Radiation that can act as a mini-thruster is created through the process, causing asteroids to drift widely over time, making it almost impossible to identify family members after billions of years.

“The family we identified has no name, because it is not clear which asteroid is the parent,” Walsh said. “This family is so old that it appears to have formed over 4 billion years ago, before the gas giants in the outer solar system moved into their current orbits.

“The giant planet migration shook up the asteroid belt, removing many bodies, possibly including the parent of this family,” he added.

The new technique allowed the researchers to search asteroid data from the inner region of the belt of old, dispersed families and look for fragments that have drifted the furthest.

“Each family member drifts away from the center of the family in a way that depends on its size, with small guys drifting faster and further than the larger guys,” team leader Marco Delbo, an astronomer from the Observatory of Cote d’Azur in Nice, France, said in a statement. “If you look for correlations of size and distance, you can see the shapes of old families.”

The main belt is filled with irregularly shaped asteroids called planetesimals that orbit the Sun between Mars and Jupiter.

The research team now plans to apply the new technique to the entire asteroid belt to find more about the history of the solar system, by identifying the primordial asteroids as opposed to the fragments of collisions.