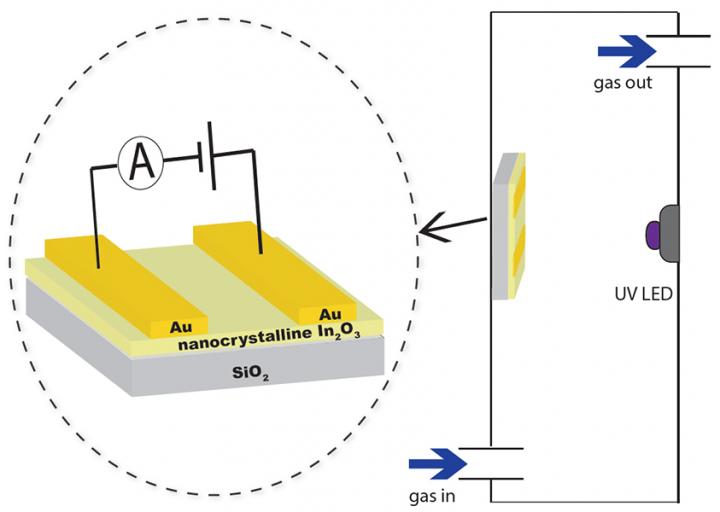 This is a hydrogen sensor scheme. Source: Alexander Ilyin

Researchers from the Physics Department of Moscow State University and their colleagues have discovered a mechanism that allows gas sensors, based on nanocrystalline metal oxides, to work at room temperature. This invention will raise the efficiency of environmental monitoring at nuclear power plants, on submarines and spacecrafts. The discovery was reported in Scientific Reports.

Scientists have proposed a new fundamental principle of operation of hydrogen sensors. Unlike most resistive gas detectors, it does not need to be heated and only requires visible light. This discovery will significantly reduce the energy consumption of the sensor and expand its scope.

“Such sensors can be used in explosive environments or be built into mobile devices without constructing additional heat sink systems,” said Alexander Ilyin, a co-author of the study, a PhD student at the Physics Department of Moscow State University.

Researchers have found out that composites based on zinc and indium oxides can significantly increase the sensitivity of the sensor to hydrogen. Physicists have also proposed an explanation for the hypersensitivity of the designed composite. In their opinion, the sensor response mechanism consists in a change in the processes of generation and recombination of nonequilibrium electrons when the composite is interacting with hydrogen. Composites with a certain structure provide a more significant change in these processes.

Samples for the sensor were made from nanocrystalline indium and zinc oxide powders. The structure and particle size were studied by the means of transmission electron microscopy and x-ray diffraction. The electrical and sensor characteristics of the structureswere studied in the new designed setup, in which the required temperature of the composite and the concentration of hydrogen were well controlled.

The obtained results would allow the scientists to develop a new type of resistive hydrogen sensor that works under additional illumination without heating. Such sensors are promising not only for effective monitoring of environmental pollution in industrial plants, but also for constant monitoring of air in closed facilities (submarines, mines, spacecraft) where the slightest change in the chemical composition can lead to human casualties.