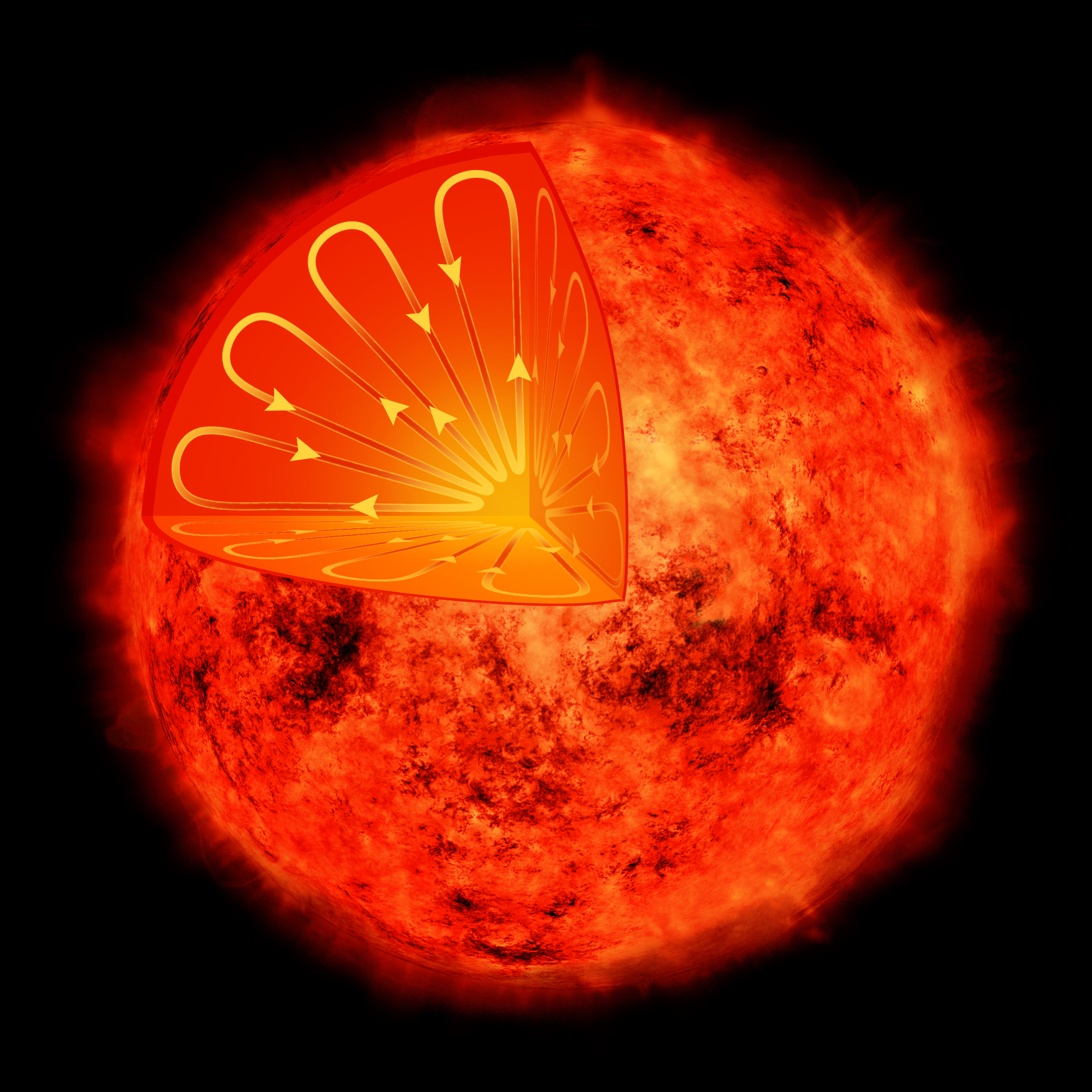 An artist’s illustration depicts the interior of a low-mass star. Such stars have different interior structures than our Sun, so they are not expected to show magnetic activity cycles. However, astronomers have discovered that the nearby star Proxima Centauri defies that expectation and shows signs of a 7-year activity cycle. NASA/CXC/M.Weiss

In August astronomers announced that the nearby star Proxima Centauri hosts an Earth-sized planet (called Proxima b) in its habitable zone. At first glance, Proxima Centauri seems nothing like our Sun. It’s a small, cool, red dwarf star only one-tenth as massive and one-thousandth as luminous as the Sun. However, new research shows that it is sunlike in one surprising way: it has a regular cycle of starspots.

Starspots (like sunspots) are dark blotches on a star’s surface where the temperature is a little cooler than the surrounding area. They are driven by magnetic fields. A star is made of ionized gases called plasma. Magnetic fields can restrict the plasma’s flow and create spots. Changes to a star’s magnetic field can affect the number and distribution of starspots.

Our Sun experiences an 11-year activity cycle. At the solar minimum, the Sun is nearly spot-free. At solar maximum, typically more than 100 sunspots cover less than one percent of the Sun’s surface on average.

The new study finds that Proxima Centauri undergoes a similar cycle lasting seven years from peak to peak. However, its cycle is much more dramatic. At least a full one-fifth of the star’s surface is covered in spots at once. Also, some of those spots are much bigger relative to the star’s size than the spots on our Sun.

“If intelligent aliens were living on Proxima b, they would have a very dramatic view,” says lead author Brad Wargelin of the Harvard-Smithsonian Center for Astrophysics (CfA).

Astronomers were surprised to detect a stellar activity cycle in Proxima Centauri because its interior is expected to be very different from the Sun’s. The outer third of the Sun experiences a roiling motion called convection, similar to water boiling in a pot, while the Sun’s interior remains relatively still. There is a difference in the speed of rotation between these two regions. Many astronomers think the shear arising from this difference is responsible for generating the Sun’s magnetic activity cycle.

In contrast, the interior of a small red dwarf like Proxima Centauri should be convective all the way into the star’s core. As a result, it shouldn’t experience a regular cycle of activity.

“The existence of a cycle in Proxima Centauri shows that we don’t understand how stars’ magnetic fields are generated as well as we thought we did,” says Smithsonian co-author Jeremy Drake.

The study does not address whether Proxima Centauri’s activity cycle would affect the potential habitability of the planet Proxima b. Theory suggests that flares or a stellar wind, both of which are driven by magnetic fields, could scour the planet and strip away any atmosphere. In that case, Proxima b might be like Earth’s Moon – located in the habitable zone, but not at all friendly to life.

“Direct observations of Proxima b won’t happen for a long time. Until then, our best bet is to study the star and then plug that information into theories about star-planet interactions,” says co-author Steve Saar.