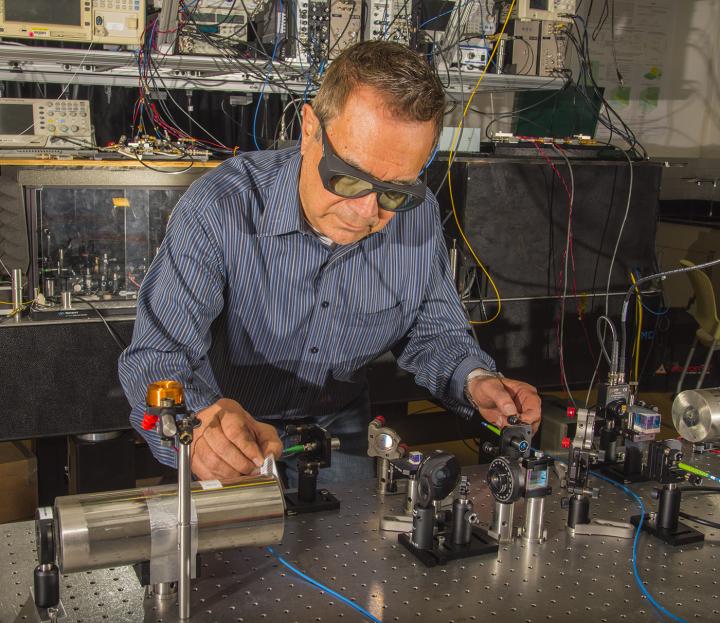 NIST physicist Dave Howe aligns a laser beam to pass through a tiny glass cell of rubidium atoms inside the cylindrical magnetic shield. The atoms are the heart of an atomic magnetometer demonstrated as a receiver for magnetic radio. These very low frequency (VLF) digitally modulated magnetic signals can travel farther through building materials, water, and soil than conventional communications signals at higher frequencies and, with further advances in receivers and transmitters, could improve communications and mapping indoors at long range, in urban canyons, underwater and underground.

Researchers at the National Institute of Standards and Technology (NIST) have demonstrated that quantum physics might enable communications and mapping in locations where GPS and ordinary cellphones and radios don’t work reliably or even at all, such as indoors, in urban canyons, underwater and underground.

The technology may help mariners, soldiers and surveyors, among others. GPS signals don’t penetrate very deeply or at all in water, soil or building walls, and therefore, can’t be used by submarines or in underground activities such as surveying mines. GPS also may not work well indoors or even outdoors among city skyscrapers. For soldiers, radio signals may be blocked in environments cluttered by rubble or many interfering electromagnetic devices during military or disaster recovery missions.

VLF electromagnetic fields are already used underwater in submarine communications. But there’s not enough data-carrying capacity for audio or video, just one-way texts. Submarines also must tow cumbersome antenna cables, slow down and rise to periscope depth (18 meters, or about 60 feet, below the surface) to communicate.

“The best magnetic field sensitivity is obtained using quantum sensors. The increased sensitivity leads in principle to longer communications range. The quantum approach also offers the possibility to get high bandwidth communications like a cellphone has. We need bandwidth to communicate with audio underwater and in other forbidding environments,” he said.

As a step toward that goal, the NIST researchers demonstrated detection of digitally modulated magnetic signals, that is, messages consisting of digital bits 0 and 1, by a magnetic-field sensor that relies on the quantum properties of rubidium atoms. The NIST technique varies magnetic fields to modulate or control the frequency–specifically, the horizontal and vertical positions of the signal’s waveform–produced by the atoms.

“Atoms offer very fast response plus very high sensitivity,” Howe said. “Classical communications involves a tradeoff between bandwidth and sensitivity. We can now get both with quantum sensors.”

Traditionally, such atomic magnetometers are used to measure naturally occurring magnetic fields, but in this NIST project, they are being used to receive coded communications signals. In the future, the NIST team plans to develop improved transmitters. The researchers have published their results in the Review of Scientific Instruments.

The quantum method is more sensitive than conventional magnetic sensor technology and could be used to communicate, Howe said. The researchers also demonstrated a signal processing technique to reduce environmental magnetic noise, such as from the electrical power grid, which otherwise limits the communications range. This means receivers can detect weaker signals or the signal range can be increased, Howe said.

For these studies, NIST developed a direct-current (DC) magnetometer in which polarized light is used as a detector to measure the “spin” of rubidium atoms induced by magnetic fields. The atoms are in a tiny glass container. Changes in the atoms’ spin rate correspond to an oscillation in the DC magnetic fields, creating alternating current (AC) electronic signals, or voltages at the light detector, which are more useful for communications.

Such “optically pumped” magnetometers, in addition to high sensitivity, offer advantages such as room-temperature operation, small size, low power and cost, and reduced interference. A sensor of this type would not drift or require calibration.

In the NIST tests, the sensor detected signals significantly weaker than typical ambient magnetic-field noise. The sensor detected digitally modulated magnetic field signals with strengths of 1 picotesla (one millionth of the Earth’s magnetic field strength) and at very low frequencies, below 1 kilohertz (kHz). (This is below the frequencies of VLF radio, which spans 3-30 kHz and is used for some government and military services.) The modulation techniques suppressed the ambient noise and its harmonics, or multiples, effectively increasing the channel capacity.

The researchers also performed calculations to estimate communication and location-ranging limits. The spatial range corresponding to a good signal-to-noise ratio was tens of meters in the indoor noise environment of the NIST tests, but could be extended to hundreds of meters if the noise were reduced to the sensitivity levels of the sensor. “That’s better than what’s possible now indoors,” Howe said.

Pinpointing location is more challenging. The measured uncertainty in location capability was 16 meters, much higher than the target of 3 meters, but this metric can be improved through future noise suppression techniques, increased sensor bandwidth, and improved digital algorithms that can accurately extract distance measurements, Howe explained.

To improve performance further, the NIST team is now building and testing a custom quantum magnetometer. Like an atomic clock, the device will detect signals by switching between atoms’ internal energy levels as well as other properties, Howe said. The researchers hope to extend the range of low-frequency magnetic field signals by boosting the sensor sensitivity, suppressing noise more effectively, and increasing and efficiently using the sensor’s bandwidth.

The NIST strategy requires inventing an entirely new field, which combines quantum physics and low-frequency magnetic radio, Howe said. The team plans to increase sensitivity by developing low-noise oscillators to improve the timing between transmitter and receiver and studying how to use quantum physics to surpass existing bandwidth limits.