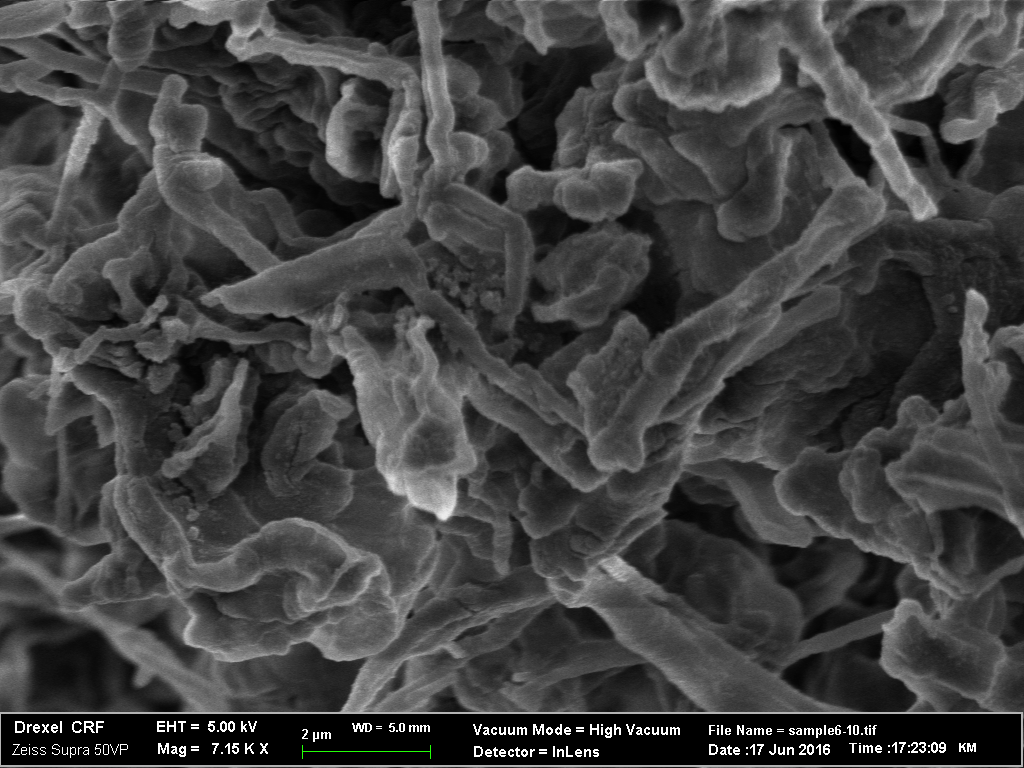 Drexel University researchers are using nanodiamonds as an additive in battery electrolyte solution to prevent the formation and growth of dendrites — which can cause short-circuits and meltdowns. Photo: Drexel University

While lithium-ion batteries, widely used in mobile devices from cell phones to laptops, have one of the longest lifespans of commercial batteries today, they also have been behind a number of recent meltdowns and fires due to short-circuiting in mobile devices. In hopes of preventing more of these hazardous malfunctions researchers at Drexel University have developed a recipe that can turn electrolyte solution—a key component of most batteries—into a safeguard against the chemical process that leads to battery-related disasters.

While lithium-ion batteries, widely used in mobile devices from cell phones to laptops, have one of the longest lifespans of commercial batteries today, they also have been behind a number of recent meltdowns and fires due to short-circuiting in mobile devices. In hopes of preventing more of these hazardous malfunctions researchers at Drexel University have developed a recipe that can turn electrolyte solution—a key component of most batteries—into a safeguard against the chemical process that leads to battery-related disasters.

Yury Gogotsi, PhD, Distinguished University and Bach professor in the College of Engineering, and his research team from the Department of Materials Science and Engineering, recently published their work—entitled “Nanodiamonds Suppress Growth of Lithium Dendrites”—in the journal Nature Communications. In it, they describe a process by which nanodiamonds—tiny diamond particles 10,000 times smaller than the diameter of a hair—curtail the electrochemical deposition, called plating, that can lead to hazardous short-circuiting of lithium ion batteries.

As batteries are used and charged, the electrochemical reaction results in the movement of ions between the two electrodes of a battery, which is the essence of an electrical current. Over time, this repositioning of ions can create tendril-like buildups—almost like stalactites forming inside a cave. These battery buildups, called dendrites, are one of the main causes of lithium battery malfunction. As dendrites form inside the battery over time, they can reach the point where they push through the separator, a porous polymer film that prevents the positively charged part of a battery from touching the negatively charged part. When the separator is breached, a short-circuit can occur, which can also lead to a fire since the electrolyte solution in most lithium-ion batteries is highly flammable.

To avoid dendrite formation and minimize the probability of fire, current battery designs include one electrode made of graphite filled with lithium instead of pure lithium. The use of graphite as the host for lithium prevents the formation of dendrites. But lithium intercalated graphite also stores about 10 times less energy than pure lithium. The breakthrough made by Gogotsi’s team means that a great increase in energy storage is possible because dendrite formation can be eliminated in pure lithium electrodes.

“Battery safety is a key issue for this research,” Gogotsi said. “Small primary batteries in watches use lithium anodes, but they are only discharged once. When you start charging them again and again, dendrites start growing. There may be several safe cycles, but sooner or later a short-circuit will happen. We want to eliminate or, at least, minimize that possibility.”

Gogotsi and his collaborators from Tsinghua University in Beijing, and Hauzhong University of Science and Technology in Wuhan, China, focused their work on making lithium anodes more stable and lithium plating more uniform so that dendrites won’t grow.

They’re doing this by adding nanodiamonds to the electrolyte solution in a battery. Nanodiamonds have been used in the electroplating industry for some time as a way of making metal coatings more uniform. While they are much, much smaller—and cheaper—than the diamonds you’d find in a jeweler’s case, nanodiamonds still retain the regular structure and shape of their pricey progenitors. When they are deposited, they naturally slide together to form a smooth surface.

The researchers found this property to be exceedingly useful for eliminating dendrite formation. In the paper, they explain that lithium ions can easily attach to nanodiamonds, so when they are plating the electrode they do so in the same orderly manner as the nanodiamond particles to which they’re linked. They report in the paper that mixing nanodiamonds into the electrolyte solution of a lithium ion battery slows dendrite formation to nil through 100 charge-discharge cycles.

If you think about it like a game of Tetris, that pile of mismatched blocks inching perilously close to “game over” is the equivalent of a dendrite. Adding nanodiamonds to the mix is kind of like using a cheat code that slides each new block into the proper place to complete a line and prevent a menacing tower from forming.

Gogotsi notes that his group’s discovery is just the beginning of a process that could eventually see electrolyte additives, like nanodiamonds, widely used to produce safe lithium batteries with a high energy density. Initial results already show stable charge-discharge cycling for as long as 200 hours, which is long enough for use in some industrial or military applications, but not nearly adequate for batteries used in laptops or cell phones. Researchers also need to test a large number of battery cells over a long enough period of time under various physical conditions and temperatures to ensure that dendrites will never grow.

“It’s potentially game-changing, but it is difficult to be 100 percent certain that dendrites will never grow,” Gogotsi said. “We anticipate the first use of our proposed technology will be in less critical applications—not in cell phones or car batteries. To ensure safety, additives to electrolytes, such as nanodiamonds, need to be combined with other precautions, such as using non-flammable electrolytes, safer electrode materials and stronger separators.”