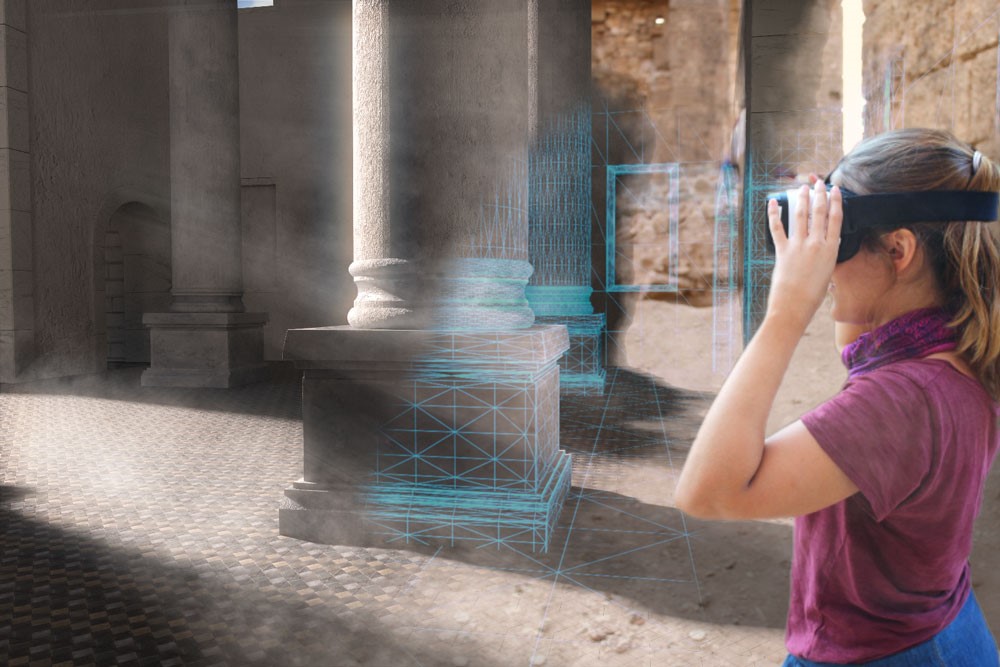 This emerging technology has yielded applications in healthcare, where aspiring physicians can view realistic simulations to prepare themselves for surgeries. Entertainment has become another area of growth for VR, and a swath of tech firms and movie studios have developed immersive experiences where users can further explore the worlds found in their favorite movies.

However, one startup in Australia called Lithodomos VR has taken a different approach to harnessing this enterprising technology.

The firm is utilizing VR to ‘recreate’ historical archaeological sites like Acropolis in Athens, Greece, and the Colosseum in Rome. Lithodomos VR offers a fulll library of content featuring historical landmarks that be viewed via VR.

Lithodomos VR’s software can be used at a historical site to make the experience more immersive, or as an educational tool elsewhere.

“Today, many of the ancient world’s secrets lie buried or destroyed. For most people, seeing a pile of ruins is hard to contextualize and visualize what was once there,”said Dr. Simon Young, the co-founder and CEO of Lithodomos VR, to R&D Magazine. “Virtual Reality is the perfect tool to reconstruct these ancient places and spaces, allowing people to explore them in a 3D environment when they are on site, or from thousands of miles away in their own home or classroom.”

To view these digital restorations, users can either pay a one-time royalty fee anytime they want to access the archive for a tour or pay a small fee to set up a recurring subscription.
Significant effort goes into creating each virtual reconstruction, said Young.

“Our reconstructions stem from academic publications and research to ensure experiences are as accurate, realistic and enthralling and engaging as possible. This practice rests upon the foundation of a long tradition of archaeological reconstruction practices. First, detailed published archaeological reports are gathered, and these form the basis of our scope. Next, archaeologists work intensively with our team of 3D artists to direct the meshing and texturing of the project. Finally, the scenes are signed off by the lead archaeologist and delivered to our library. The time needed for the process varies a great deal depending on the complexity of the scene, but on average, a few weeks,” explained Young.

Their offerings can be downloaded through Google and Apple’s respective app store.

Young said that the goal of his venture is to offer people the ability to instantly form a connection with the place they are in.

“Some ancient sites attract thousands of visitors every day, but most of the time these visitors can’t connect on a personal level to the ruins,” he continued.

The mobile VR headsets used to view these locales are intended to be like, “binoculars into the past,” which can enhance and enrich each viewpoint from a variety of locations.

Young acknowledged that visitors have an obvious fascination with “big ticket destinations” like Rome and Athens, but he noted Lithodomos also sees immense value in building models of archaeological sites that are less well-understood.

One example in Lithodomos’s library is the Odeion of Agrippa located in Athenian Agora.

This destination was once a concert hall that would have once hosted events like musical performances, poetry recitations, and exhibitions of rhetorical skills. It was constructed around 15 B.C. with a seating capacity of about 1,000. It was built by a member of the Roman elite that Young felt was viewed as a symbol of Rome’s respect for contributions the Greek culture made to humanity.

“Today it is mass of ruins that visitors pass by without a second thought,” Young noted adding that his company brought the location back to life in its full glory.

The Future for Embracing the Past

There are a lot of advantages for using VR in providing deeper insights into history, but there are some disadvantages as well.

Young said that when the content creation process is taken up by non-specialists, the results can lack scientific rigor and accuracy.

“As content creators of cultural heritage materials, we have a responsibility to strive to ensure that the information presented to viewers is correct and backed up by solid research,” he explained.

Young noted his company is always looking for new frontiers and opportunities where they can expand their content library including potential sites in China, India, and South Korea. Also, they are finishing work on their distribution platform so customers can undertake self-guided tours of any place with enhanced audio capabilities.

Ultimately, Young’s thoughts on the future of VR is that the wave of popularity is building, but will crash down in the future.

“In time, everyone will have a VR headset, but penetration rates are slower than originally anticipated. Many have taken this as a sign that VR will peter out – it will not,” said Young.