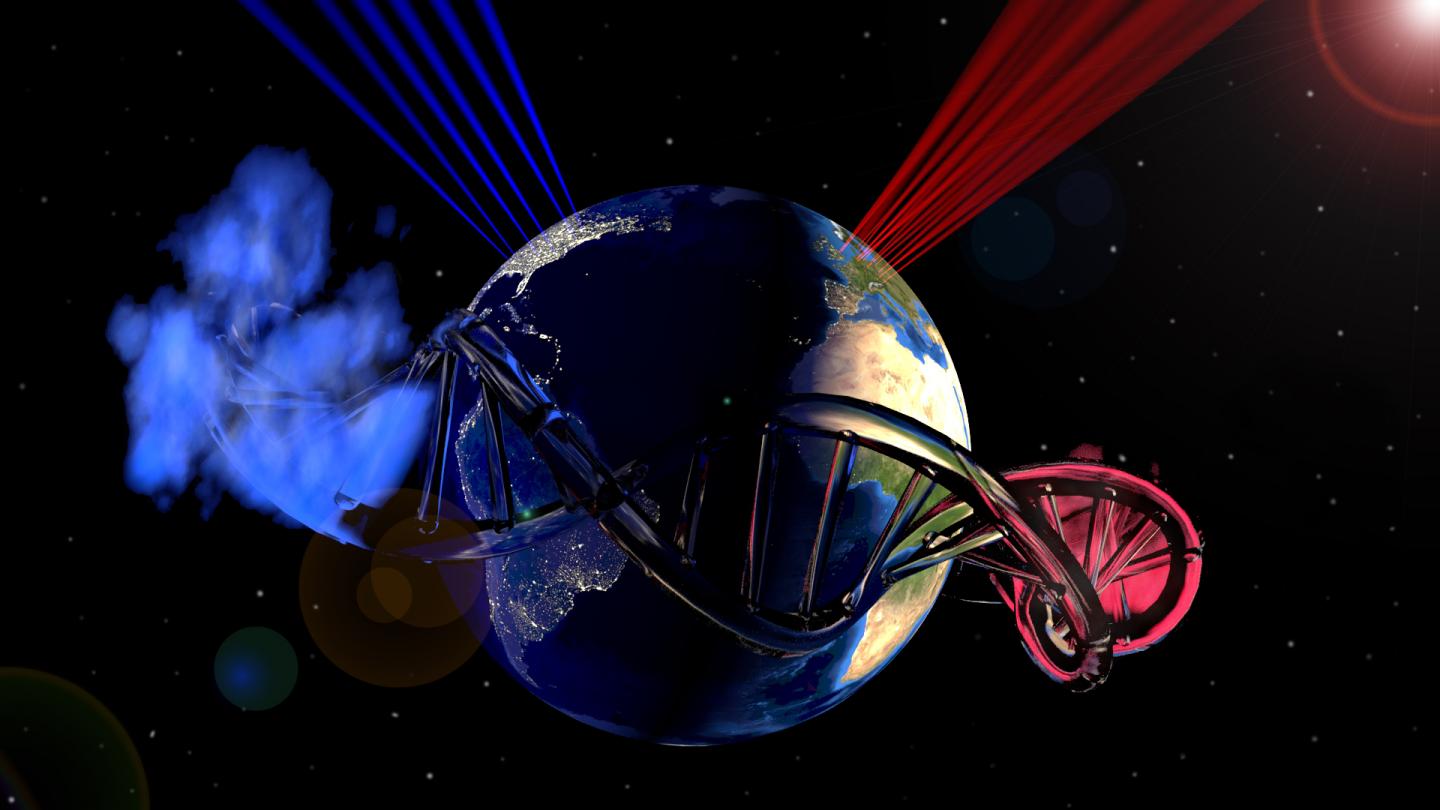 Art designed for the researchers’ publication represents the 27 institutions around the world who collaborated on this project. Credit: Hugo Sanabria / Nandakumar Chedikulathu Vishnu

Architects cannot build a house without the proper dimensions of the foundation. Likewise, scientists cannot develop targeted drug therapies without first measuring the surfaces of biomolecules such as proteins, RNA or DNA.

The best practice for gathering these measurements is hotly contested in the fields of biophysics and structural biology because scientists prefer different, personalized methods that often yield a variety of results for one given biomolecule.

In a race to the finish, a team of 27 labs across the world – including Hugo Sanabria’s “Single Molecule Biophysics” lab at Clemson University – set out to address this discrepancy. Their findings, published this week in Nature Methods, have developed a standardized protocol for Förster resonance energy transfer (FRET), arguably one of the most precise methods of measuring distances within biomolecules.

In FRET, two chromophores, or light-sensitive chemical compounds, are attached to a biomolecule at two different positions. When the chromophores fall in proximity to one another and are positioned in just the right orientation, an energy transfer occurs from one chromophore in the excited state – a donor – to the other chromophore – an acceptor. After incorporating Förster’s theory, which describes the energy transfer process between the two chromophores, the distance between them can be captured under a microscope. The subsequent measurement is referred to as a FRET efficiency and is commonly known as the “spectroscopic ruler.”

“You can get the distance between chromophores in two ways by using intensity-based measurements,” Sanabria said. “One way is when you fix your sample on a microscope cover glass, and you look at that one molecule for a standard period of time. These are immobilization studies. The other method is when the molecules are moving around, so they’re free to diffuse, and you sample many individual molecules over many short periods of time. This uses a confocal microscope like the one we have built at Clemson.”

The idea to bring together the two methodologies came in 2012 at a conference in Germany, where researchers in the single molecule community put in motion a worldwide benchmark study for determining FRET efficiencies.

In the study, the participating researchers each were sent two sets of double-stranded DNA molecules that were tagged with FRET chromophores at differing positions. Some researchers measured the molecules using the immobilization method and others with the diffusion method. However, under the guise of a blind study, none of the researchers knew the actual distance between the chromophores, which sparked a challenge in who could render the most precise measurement experimentally.

Fortunately for Sanabria, a new assistant professor in Clemson’s department of physics and astronomy when the study was initiated, his lab came well within the common error.

“When I compared our results with other results that people presented, we were among those that had the closest distance to the expected one. That was fantastic for us,” Sanabria said. “It was one of the first samples that we measured here at Clemson; and, for me, it was confirmation that, ‘Yes, we’re doing this correctly.'”

In the end, the researchers reported their findings within a seven percent of each other, coming to an agreement on a set of procedures that enable the validation of precise, accurate FRET efficiencies no matter which method is utilized.

“This sets these two methodologies as the standards in FRET,” Sanabria said. “It basically establishes that if you do it your way, you’re OK, as long as you’ve followed a set of rules. Now, new investigators who want to do FRET have these standards available to them. They can buy the samples from a vendor, measure them and if they get this known number, they’re good to go.”

With this study comes an expanded set of capabilities in structural biology for measuring molecules of different shapes and sizes and producing newfound structural models of those molecules. And FRET, Sanabria says, is the only method that can overcome size and stability limitations that the “golden standards of structural biology,” such as X-ray crystallography, nuclear magnetic resonance and cryo-electron microscopy, are confronted with.

“Once you have the structure, you can do what is called targeted drug development,” Sanabria said. “You can do in silico studies where you consult the databases of these small molecules and see which molecules interact with that DNA, RNA or protein and what will be the effects of that small molecule. This could lead to potential new drugs or applications of drugs for other diseases that we have not considered.”

As pioneers of the FRET methodology, Sanabria and his colleagues in the single molecule community are working to deposit the structural models of biomolecules uncovered by FRET into a publicly available database so that interested researchers can further their studies into structural biology.

“Right now, what we are doing is at the cutting edge of science. This is really ushering in a new field within biophysics,” he said.