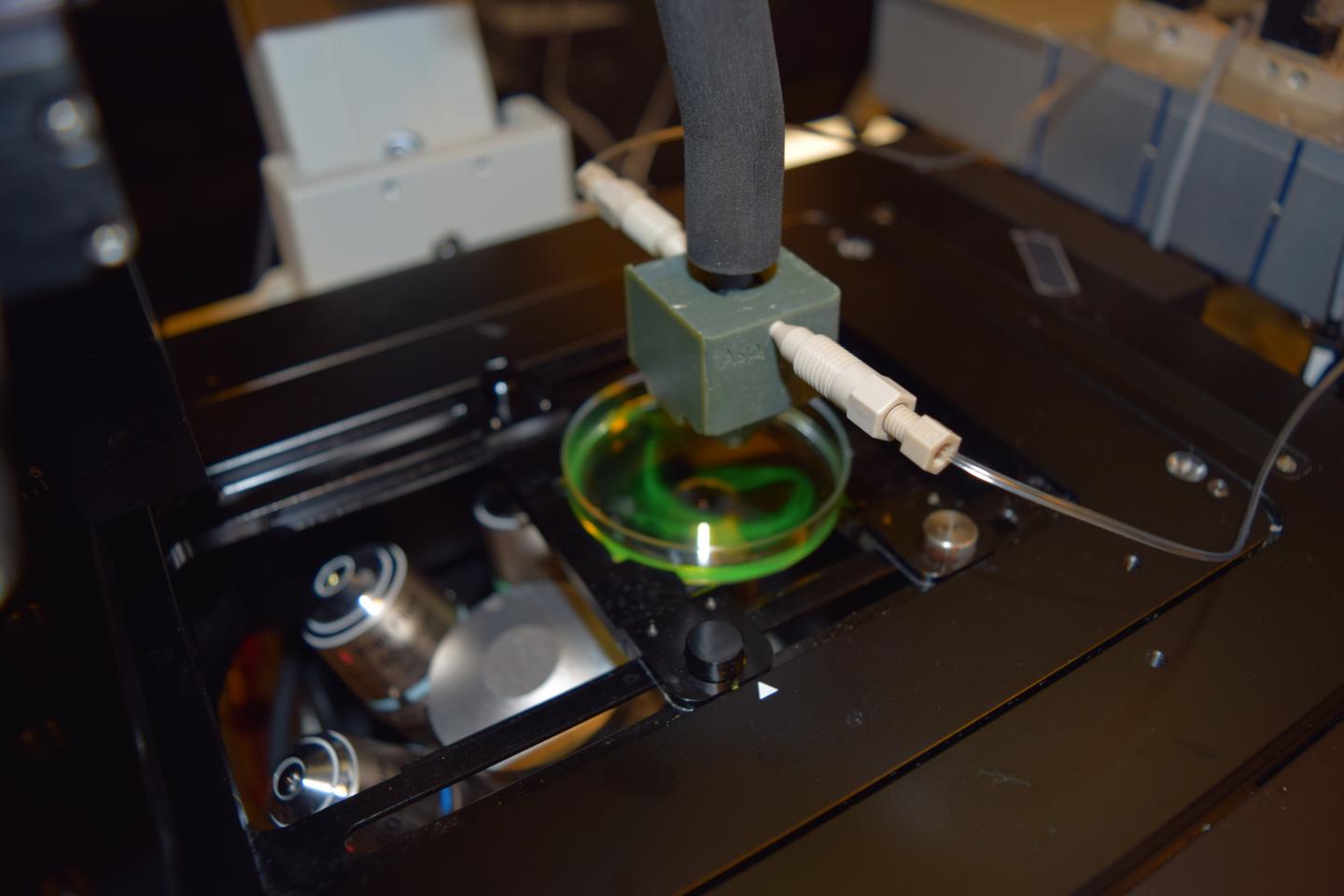 These images show a microfluidic probe printed in 3D. Cube-shaped and green-colored, this probe is about the size of a ring box, however, the design can be printed in many sizes.

NYU Abu Dhabi Assistant Professor of Mechanical and Biomedical Engineering Mohammad Qasaimeh, and NYU Abu Dhabi Global PhD Fellow in Engineering and first author of the research Ayoola T. Brimmo, along with other researchers, used a 3D printer to create a functional, integrated, and inexpensive microfluidic probe (MFP) to study cancer cells and other living organisms in a Petri dish. Their research, recently published in journal Scientific Reports, suggests that 3D printers can provide a sophisticated, less expensive MFP, which works just as effectively.

Typically made of glass or silicon, MFPs are very tiny scientific tools — roughly the size of a pen tip — and were invented about a decade ago and are continuously being developed and refined. They are used by scientists around the world to study, process, and manipulate live cell cultures in a controlled environment.

While the technology is well established, it still poses unique challenges and limitations. MFPs cannot be easily produced on demand due to their complex fabrication procedures, and are expensive to make in large quantities because of their assembly procedures.

“3D printers provide a simple, rapid, and low-cost technique for fabricating MFPs,” said Qasaimeh, whose team developed a framework to print MFPs and quadrupoles in 3D.

“It’s cheaper to produce, easy to scale up, and fast to fabricate — all steps, from design to product, can be made in less than a day,” he explained, and as a result, “any science lab with a moderate resolution stereolithography printer will be able to fabricate 3D MFPs on demand and use them to process cells reliably.”

3D printed MFPs, “can deliver reagents in a localized manner, only a few tens of cells can be targeted within the culture dish, while leaving other millions of cultured cells untouched,” added Brimmo.

In an earlier study, Qasaimeh and his research team used a silicon MFP to discover how neutrophils respond to moving sources of concentration gradients that mimic infections and pathogens. The research analyzed how quickly these cells respond to stimulation, showed how neutrophils start their migrations at a maximal speed that slows over time, and how neutrophils undergo rolling-like behaviors before they start to pursue an infection site.

Qasaimeh is the principal investigator of the Advanced Microfluidics and Microdevices Laboratory at NYU Abu Dhabi, whose work focuses primarily on developing micro-tools for biologists working in human health research, including devices to capture circulating tumor cells taken from blood samples of cancer patients.