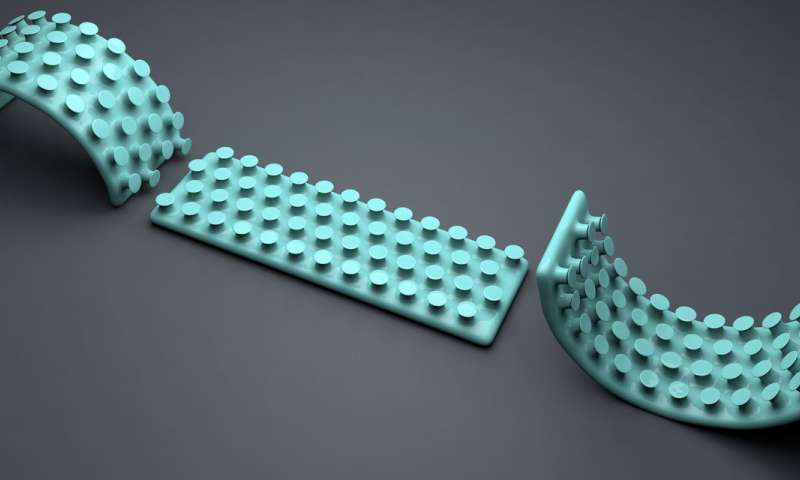 Different configurations change the adhesive effect of the silicone material, whose surface has been given a mushroom-like structure. The adhesion is best when bent concave (right). Credit: Emre Kizilkan

Thanks to special adhesive elements on their feet, geckos, spiders and beetles can easily run along ceilings or walls. The science of bionics has attempted to imitate and control such bio-inspired abilities for technological applications and the creation of artificial materials. A research team from Kiel University (CAU) has now succeeded in boosting the adhesive effect of a silicone material significantly. To do so, they combined two methods: First, they structured the surface on the micro scale based on the example of beetle feet, and thereafter treated it with plasma. In addition, they found out that the adhesiveness of the structured material changes drastically if it is bent to varying degrees. Among other areas of application, their results could apply to the development of tiny robots and gripping devices. They have been published in the latest editions of the scientific journals Advanced Materials and ACS Applied Materials & Interfaces.

Elastic synthetic materials such as silicone elastomers are very popular in industry. They are flexible, re-usable, cheap and easy to produce. They are therefore used as seals, for insulation, and as corrosion protection. However, due to their low surface energy, they are hardly adhesive at all. This makes it difficult to paint silicone surfaces, for example.

Professor Stanislav N. Gorb and Emre Kizilkan from the Functional Morphology and Biomechanics working group are researching how to improve the adhesive properties of silicone elastomers. Their example to mimic is the surface structure of certain male leaf beetles (Chrysomelidae), looking like mushrooms. In two recent studies, they discovered that silicone elastomers adhere best if their surface is modified into mushroom-like structures and thereafter specifically treated with plasma. The electrically-charged gas is a fourth state of matter alongside solids, liquids and gases. Thus, the researchers combined geometrical and chemical methods to imitate biology. In addition, they showed that the degree of curvature of the materials affects their adhesion.

“Animals and plants provide us with a wealth of experience about some incredible features. We want to transfer the mechanisms behind them to artificial materials, to be able to control their behaviour in a targeted manner,” said the zoologist Gorb. Their goal of reversible adhesion in the micro range without traditional glue could make completely new applications conceivable—for example, in micro-electronics.

During experimental tests silicones are curved

In a first step, the research team compared silicone elastomers of three different surfaces: one unstructured, one with pillar-shaped elements and a third with a mushroom-like structure. Using a micro-manipulator, they stuck a glass ball onto the surfaces and then removed it again. They tested how the adhesion changes when the materials with microstructured surfaces are bent convex (inward) and concave (outward). “In this way, we were able to demonstrate that silicone materials with a mushroom-like structure and curved concave have the double range of adhesive strength,” said doctoral researcher Emre Kizilkan, first author of the study. “With this surface structure, we can vary and control the adhesion of materials the most.”

In a second step, the scientists treated the silicone elastomers with plasmas. This method is normally used to functionalise plastic materials, in order to increase their surface energy and to improve their adhesive properties. In comparison with other methods using liquids, plasma treatments can promise greater longevity—however, they often damage the surfaces of materials.

What happens when the treated and non-treated structured surfaces are removed from the glass substrate show the recordings with a high-speed camera: Because of its higher surface energy, the plasma-treated microstructure remains fully in contact with the surface of the glass for 50.6 seconds. However, the contact area of the untreated microstructure is reduced quickly by around one third during the removal process, which is why the microstructure completely detaches from the glass substrate after 33 seconds already (Figure 3).

“We therefore have on a very small area an extremely strong adhesion with a wide range,” says Kizilkan. This makes the results especially interesting for small-scale applications such as micro-robots. The findings of the Kiel working group have already resulted in the development of an extremely strong adhesive tape, which functions according to the “gecko principle,” and can be removed without leaving any residue.