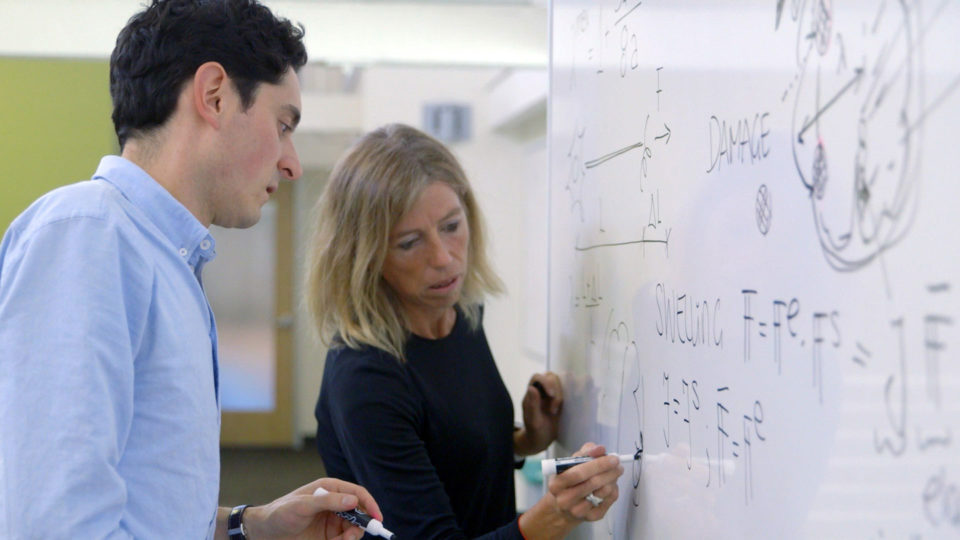 A team of researchers led by Stanford engineers has moved a step closer to helping surgeons more safely perform a life-saving procedure for victims of brain trauma.

While surgeons have long performed an operation called a decompressive craniectomy – cutting a hole in the skull to give the swelling brain space to expand – the technique requires a fair amount of guesswork on how best to proceed. “In other parts of the body we can take a small sample of the affected tissue, but you can’t cut out a slice of the brain,” said Ellen Kuhl, a professor of mechanical engineering at Stanford. “What we’ve begun to develop are simulations to show how the brain reacts to trauma.”

Working with Johannes Weickenmeier, a postdoctoral scholar at Stanford, and Alain Goriely, a professor of mathematics at the University of Oxford in England, the group recently published a trio of scholarly papers on their work, the latest of which appeared in Physical Review Letters.

They describe how the researchers took information from magnetic resonance images and then created mathematical models to predict how certain injuries affect specific parts of the brain, showing extreme damage in red, mild damage in green, and safe areas in blue.

“Our brains are enclosed in the limited space of our skull,” Weickenmeier said. “When they want to swell, there is no space, so the pressure inside the skull increases. This can become life threatening.”

For more than a century surgeons have performed decompressive craniectomies to relieve that inner pressure, cutting a hole in the skull to allow parts of the brain to bulge out.

But, as Kuhl explained, the shape of the brain is essential to its function. It consists of billions of fragile filaments, called axons, bundled together in purposeful patterns. When parts of this amalgam bulge out, axons stretch and shear. Surgeons currently rely on experience to limit the collateral damage that might occur when dire circumstances force them to perform a decompressive craniectomy.

“This is a new tool to help surgeons decide where and how big to make the hole, by giving them a way to visualize the effects of the procedure on the brain tissue,” Kuhl said.

The simulations are based on a technique called finite element analysis – a computational tool to divide a complex object into smaller pieces, the finite elements, and predict how each piece will react to pressure, heat, vibration or other mechanical forces.

Kuhl first applied the finite element analysis technique to the human heart, giving surgeons new ways to understand different treatment strategies before opening a patient’s chest. In 2014 her work became part of the Living Heart Project, a consortium of academic, industrial and regulatory scientists working to establish biophysical simulations as a platform for planning surgical interventions.

Around the same time, Kuhl began studying the physical stresses and strains that act on the billions of axons in the brain, resulting in the work that led to her three recent papers on decompressive craniectomies.

She and her collaborators reviewed prior brain research and did their own experiments to establish how much stretching axons could tolerate before they are damaged. “When you get to the point where axons stretch near or above 30 percent, you see serious damage,” she said.

Of course, computer models must know the amount of brain swelling before surgeons cut open the skull. The group inferred these swelling volumes by studying medical scans of brains that had undergone concussions or other traumatic injuries.

Alain Goriely developed mathematical estimates to predict the effects of swelling on axonal stretch. Johannes Weickenmeier, with help from the software company Simpleware, divided the brain into 1.2 million finite elements. Each of these elements experiences its own forces and responds by its own deformation. To visualize the net result of all these elements, the group created red-green-blue maps to highlight extreme, moderate and negligible axonal stretch.

Then they did what simulations do best: play what-if scenarios to illustrate how skull openings of different sizes in different regions affect the axons inside the brain.

“We were surprised to see that even very small swelling volumes can cause axonal stretches beyond the damage threshold of 30 percent,” Kuhl said.

Now she hopes brain surgeons and other researchers will join the effort to improve these models and find new ways to apply simulations to peer beneath the skull.

“We are just at the beginning of a long-term effort to give neurosurgeons new tools to look inside the brain and make more informed decisions,” Kuhl added.