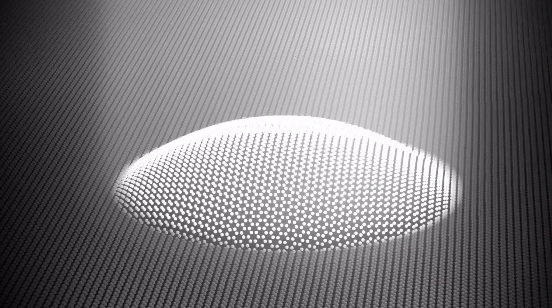 Researchers from TU Delft in The Netherlands, in collaboration with a team at the University of Cambridge (UK), have found a way to create and clean tiny mechanical sensors in a scalable manner. They created these sensors by suspending a two-dimensional sheet of hexagonal boron nitride (h-BN), or ‘white graphene’ over small holes in a silicon substrate. This innovation could lead to extremely small gas and pressure sensors for future electronics.

Hexagonal boron nitride (h-BN) is an interesting material, since it has a honeycomb lattice structure similar to that of graphite. But while graphite conducts electricity, h-BN acts as an insulator. This property makes h-BN popular as a high-end lubricant, especially in industrial applications where electrical conductivity is undesirable. Since h-BN has the added benefit of being chemically and thermally more stable than graphite, it is also used in harsh environments such as space, for example in deep ultraviolet applications.

Sticky stuff
While layers of the two-dimensional material graphene can be exfoliated from graphite with sticky tape, creating single layers of h-BN is much more difficult. The reason for this is that the layers that make up h-BN ‘stick’ to one another – and other materials – much more strongly than layers of graphene do. Thus, not many researchers have been able to study the properties of h-BN as a 2D material until now.

“There are only two or three institutions in the world that can produce single, two-dimensional layers of white graphite, and the University of Cambridge is one of them,” said lead author Santiago J. Cartamil-Bueno. “This project is a success thanks to our effective collaboration with them.”

Using a technique called chemical vapour deposition, researchers at the University of Cambridge grew a one-atom thick sheet of h-BN, or ‘white graphene’, onto a piece of iron foil. They then mailed it to TU Delft in The Netherlands. There, through a series of steps, the Delft researchers transferred the sheet of transparent white graphene onto a silicon substrate containing tiny circular cavities. By doing so, they created microscopic ‘drums’. These drums function as mechanical resonators and could be used as infinitesimal gas or pressure sensors, for instance in mobile phones.

Cleaning the drums
While creating the h-BN drums was a significant challenge in itself, this project posed another, even bigger challenge. As a result of the various steps needed to  transfer the monoatomic sheet onto the silicon substrate, the drums were contaminated with a number of polymers. Contaminations such as this are quite common and they are undesirable since they change the properties of the sensors. The result is that all of the sensors may behave slightly differently. ‘In order to outperform the normal sensors in the market, however, it is important that all 2D sensors behave in exactly the same way’, Cartamil-Bueno explains.

The Delft researchers found a solution: using ozone gas, they managed to clean the drums. The aggressive gas removed all of the organic polymers. However, traces of PMMA, a  polymer with inorganic components, were left behind on the resonators.

‘”Fortunately, this problem can be solved by only using organic substrates while transferring the sheet of white graphite onto the cavities,” says Cartamil-Bueno. Thus, the Delft researchers have provided proof of principle for the fabrication of incredibly small sensors for future electronics.